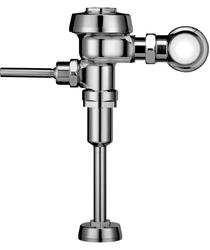 Flush valves and flushometers are metal water-diverting valves that use pressure from the water supply system instead of gravity to cause a urinal or toilet to flush. The devices also allow the flow of new water into the toilet or urinal during the flush by opening of a diaphragm.

William Elvis Sloan invented the Royal Flushometer near the turn of the 20th century. The device was taken to market as the first product of the newly founded Sloan Valve Company in 1906. Led by Sloan's descendants, the company continues to sell the Royal Flushometer and other flush valves. Numerous competitors have entered the market a version of the device. The Flushometer eliminated the need for raised water tanks that required gravity to power the flush. In addition, the solution offered added water efficiency benefits.

Today, flush valves and flushometers are used in millions of commercial, industrial and institutional toilets and urinals all around the world. Because flushometers require a larger water supply line than is available in most residences, the devices are not common for residential applications. Gravity-powered tank-type toilets are still the standard in residences.

All flushometers use the same basic design components and principles of physics to function. However, there are several types defined by their features. Flush valve and Flushometer types include:

The devices naturally excel at saving water since the valve does not stay open when the lever or push button is held down. Doing so only sends the main cylinder valve to its top shutoff position.

The primary feature of flush valves and flushometers is their flushing mechanism, which include:

The devices are installed in an arrangement where the Flushometer is concealed-usually in the wall behind the toilet or urinal-or exposed. Flushometers are made from more durable and corrosion-resistant parts that stand up to the harshest water conditions. The devices offer a range of flush size options, letting owners balance water efficiency against the need for a standard or more powerful flush.

Older flushometers are less water efficient compared to newer models. According to the EPA, older flushometers in toilets use 3.5 gallons or more per flush (GPF), significantly more than the federal standard at 1.6 GPF. The EPA estimates replacing an old, inefficient model with a new Flushometer that meets the agency's WaterSense labeling standards will save a business more than 5,400 gallons of water. This translates into more than $1,000 over the course of the toilet's lifetime.

The primary uses of flush valves and flushometers are in commercial, industrial and institutional applications. Buildings in these categories have water supply lines large enough to accommodate the devices' requirements. There are many more specialized applications available for use in these systems. For example, naval and marine applications require flushometers to function under harsh water conditions. Prisons require exposing portions of the device and must be virtually unbreakable. Gender also determines a particular application. Male-only urinals are common in public men's restrooms. 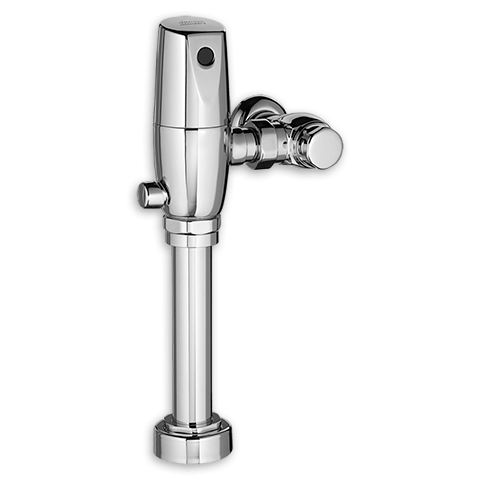 Specifications of flush valves and flushometers include:

Water valve devices are designed to withstand pressure and protect against negative effects of water conditions. Resistance to rust, corrosion and chemicals residing in water is critical. Particular corrosion-resistant metals, coatings on metal and plastics facilitate this requirement. Materials integrated with flush valves and flushometers include:

In applications where the Flushometer is exposed, the devices are either plated for esthetic purposes or covered for protection. Castings that cover the exposed Flushometer are made from metal alloys.

Traditional exposed flushometers have performed well for their intended use.  Commercial, industrial and institutional applications last for decades, making these a popular choice all over the world. However, businesses and building owners are increasingly turning to touch-free models due to hygiene concerns and to ensure proper flushing consistency. While flushometers are inherently designed to work well in high-use conditions, some applications endure harsher conditions than others. Specialized flushometers such as naval and prison models are appropriate for such applications.

ASME A112.19.5 - Flush valves and spuds for water closets, urinals, and tanks