Show all Hammers and Mallets Manufacturers

Hammers and mallets are simple, handheld tools intended to deliver impact force to an object with linear direction.

Most hammers and mallets rely upon the physical prowess of the operator to: deliver accurate blows to the head of a fastener, such as a nail or spike, join or forge malleable metal components, or chisel/degrade objects. The hammer is a simple tool which is employed across a large array of workforces.

The main difference between hammers and mallets is the construction of the hammer head and its intended application.

Hammer heads are almost universally steel, but other hardened alloys may be implemented. The hammer's mass is concentrated in the strike zone to impart as much force as possible. They are effective for driving fasteners and marring materials.

Mallet heads are composed of rubber, wood, copper, or plastic. The mass of the mallet head is distributed evenly throughout, meaning that mallets are intended to forge or alter the shape and appearance of materials. They impart a mild-to-moderate force to the workpiece. Mallets are classified according to composition, but this also dictates suitable applications.

These tools are force amplifiers. The swing of an arm and hand will produce a certain degree of force, and the length of the hammer or mallet handle increases the speed of the hammer head. Gravity also has a minimal effect on the acceleration of a hammer swing. Upon the hammer strike, an equal but opposite force is generated by the target. The stopping force (which is responsible for the actual work) and the travel of the hammer after impact (which negatively affects hammer performance) must equal that the kinetic energy of the hammer head. Therefore, stopping force must be greater than the force imparted by the hammer swing unto the target. If the target is a heavy or hardened object, the travel of the head upon the strike is minimized. In the instance of a mallet, some of imparted force is reduced by the material of construction.

The head is the most significant part of the tool, as a hammer’s type and function is defined by the shape and construction of the head. Hammers consist of multiple parts: face, eye, neck, throat, crown, and claw.

The striking face is what makes contact with a material or object. Crowed hammer faces drive nails without leaving marks on a surface. A hammers throat is attached to the neck and allows for power striking. The eye of a hammer is often deep and tapered to prove a secure head-to-handle assembly. Hammer necks often have an octagon-shaped design. The claw, which is often a double bevel that provides clearance for nail heads and allows for a firm grip on nails of all sizes. 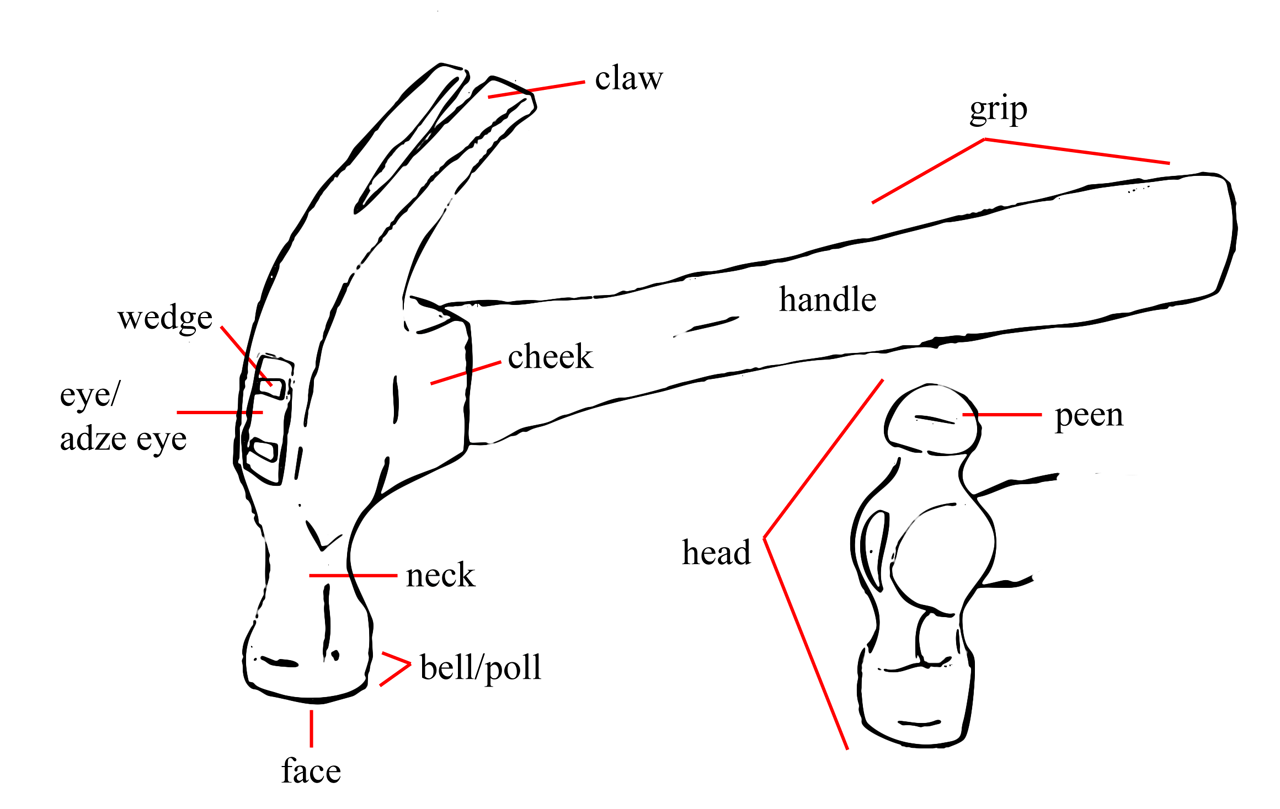 The handle is the part of the hammer that connects the head to its means of operation. For hand-powered and mechanically-powered hammers, the handle connects the head to the user or the operating mechanism respectively. A longer handle will provide the potential for greater force application, but is limited by space constraints and by the ability for the user to accurately hit the desired target.

Mallets are similar in construction to hammers, but typically do not need a claw. Mallet heads are attached by hardware, wedges, or adhesive. 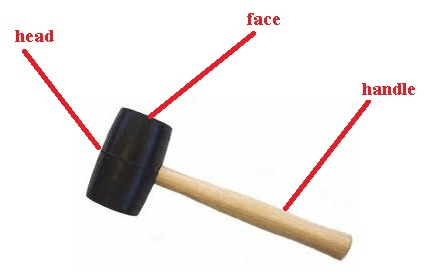 Some uses for hand-powered hammers in carpentry and upholstery are being replaced by nail-guns and staple-guns.

Mallets are used to press-fit plasterboard and wooden articles. They are also used in instances where a hammer may produce a spark and ignite a flammable substance. They may be utilized to tack upholstery and forge metal. Mallets find frequent employment outside of industrial uses; as is the case with gavels and croquet mallets.

Special features for hammers include options for straight claws, serrated faces, graphite handled or cored, and a ribbed or soft-cushion handle grip. Many of these features are unique to certain types of hammers.