Wafer cassettes are used to transport and store wafers during semiconductor manufacturing operations. Also referred to as wafer carriers, they are designed to house or carry several wafers of the same size and are available in a range of materials to support specific applications, such as thermal processing.

A vacuum wand is typically used to pick up and deposit wafers in cassettes, which are then used to transfer the wafers between processing chambers and other storage containers. Custom cassettes may be designed to interface with a specific system or storage container.

Wafer carriers are designed to fit a wide range of wafer sizes from 2.5 inches to 450mm. 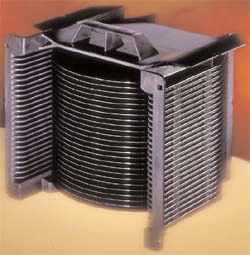 Wafer cassettes are designed to suit a wide variety of applications and may possess the following qualities:

Wafer cassettes are manufactured from a variety of materials tailored to specific semiconductor applications.

Plastics are often blended with other materials such as carbon for improved static dissipation to avoid wafer damage caused by a buildup and discharge of static electricity. Plastic materials include polyetheretherketone (PEEK) with carbon fiber or carbon nanotubes, and polypropylene and carbon powder.

Cassettes designed for wet chemical processing applications may use material such as perfluoroalkoxy alkane (PFA) that is resistant to degradation from aggressive chemicals.