Superconductors exhibit unique features other than their ability to perfectly conduct current. For example, many expel magnetic fields during the transition to the superconducting state. This is due to the Meissner effect by which superconducting materials set up electric currents near their surface at Tc, therefore canceling the fields within the material itself. A stationary magnet on a superconductor demonstrates this effect: as the superconductor cools through its critical temperature, the expulsion of magnetic flux from the conductor causes the magnet to levitate above the material. 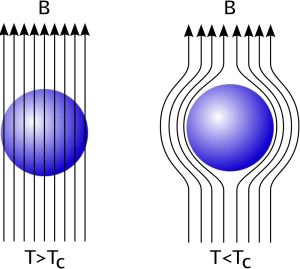 The Meissner effect: a superconductor's magnetic flux above (left) and below critical temperature.

These formulas, along with other superconductor principles, are explained in the educational video below.

Superconductors are classified into Type I and Type II materials.

Type I materials show at least some conductivity at ambient temperature and include mostly pure metals and metalloids. They have low critical temperatures, typically between 0 and 10 K (-273°C and -263°C respectively). As discussed above, this type experiences a sudden decrease in resistance as well as the complete expulsion of magnetic fields (perfectly diamagnetic) at critical temperature.

Type I metals achieve superconductivity through slowing down molecular activity via low temperatures. According to BCS theory, this creates an environment conducive to Cooper pairing so that electron pairs are able to overcome molecular obstacles, leading to free electron flow without applied voltage.

Copper, silver, and gold are three of the best metallic conductors but are not superconductive. This is due to their face-centered cubic (FCC) unit cells lattice structures, which are so tightly packed that the low-temperature lattice vibrations essential to superconductivity fail to coerce free electrons into Cooper pairs. While some FCC metals such as lead are capable of superconductivity, this is due to outside factors such as lead's low modulus of elasticity.

Type II materials also take on a mixed state, which contrasts with plunging resistance at Tc for Type I materials, when approaching their critical temperature. Mixed states are caused by the fact that Type II superconductors never completely expel magnetic fields, so that microscopic superconducting "stripes" can be seen on the material.

The graph below illustrates this distinction, as well as a timeline showing the history of critical temperature discoveries. Materials with critical temperatures falling above the boiling point of liquid nitrogen (around 77 K) are known as high-temperature materials. The dramatic increase in Tc seen in the middle of the graph is the result of the discovery of superconductive cuprates and perovskites with high Tc in 1986 and 1987. 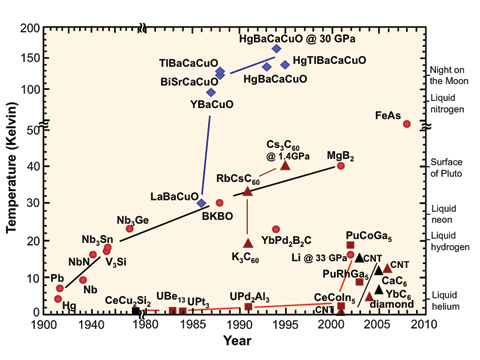 Suppliers of superconductors and superconducting materials offer products in various different forms, some of which are listed below.

Raw superconducting materials include chemical compounds in the form of powders or crystals. Superconducting powder is incorporated into the manufacture of more efficient fuel cells, gas separation membranes, and lithium-ion batteries.

Magnets are produced for MAGLEV and MRI applications, as discussed below, as well as microscopy and NMR/EPR spectroscopy.

Wire and cable are used in superconductive power transmission and scientific research in ultra-high magnetic fields.

Superconductor manufacturers may specialize in the advancement of a certain superconducting compound, such as niobium-based formulas or magnesium diboride (MgB2).

Superconductors are not available on a wide commercial scale due to the extensive cooling necessary to reach superconductive states. They are common in a few specialized applications, including:

MAGLEV trains use superconductive magnets to practically eliminate friction between the train and the tracks. The use of conventional electromagnets would waste vast quantities of energy via heat loss and necessitate the use of an unwieldy magnet, whereas superconductors result in superior efficiency and smaller magnets.

Magnetic resonance imaging (MRI) uses superconductor-generated magnetic fields to interact with hydrogen atoms and fat molecules within the human body. These atoms and molecules then release energy that is detected and formed into a graphic image. MRI is a widely used radiographic method for medical diagnosis or staging of diseases such as cancer.

Electric generators built with superconductive wire have achieved 99% efficiency ratings in experimental tests but have yet to be built commercially.

Superconductor Information for the Beginner