Food additives include any chemicals added to food to achieve desired nutritional, preservative, and sensory qualities.

Since the advent of modern food processing in the early 20th century, additives have become increasingly common. Modern food additives, especially those used for preservation or processing, have made portable, long-lasting, low-calorie foods ubiquitous. Natural, unprocessed food additives — such as salt, vinegar, oil, and lye — have been used to preserve food and prevent spoilage since ancient times.

Nutritional additives are used to restore vitamins and other nutritional qualities which may have been lost or degraded during processing. These additives are said to "fortify" or "enrich" food products; for example, fortified (or "iodized") salt contains added iodine to prevent iodine deficiency and goiter, while enriched flour — a very common product found in cosmopolitan markets — is simply flour with additional B vitamins.

Processing agents are added to foods in order to aid in processing or to preserve consistency, color, or stability after processing. These additives are typically classified by the desired quality they add to a food product, as shown below:

Preservative additives can be classified into two broad types: those used to prevent food deterioration by oxidation (antioxidants) and those which inhibit spoilage by pathogenic microorganisms (antimicrobials).

Oxidation is an undesirable occurrence in processed food. It may occur through the reaction (autoxidation) between carbon-carbon bonds and molecular oxygen in unsaturated fatty acids, which produces free radicals which cause undesirable odors and tastes. Oxidation may also be caused by specific enzymes. For example, the enzyme phenolase catalyzes with certain amino acids when the skin of a fruit or vegetable is bruised, causing oxidation.

Preservatives which are added to combat oxidation are therefore categorized by the type of oxidation they prevent. Autoxidation preservatives serve to control molecular oxygen or free radicals, while enzyme oxidation is controlled by enzyme inhibitors. Common antioxidants include:

Antimicrobials are typically combined with refrigeration and other preservation techniques to inhibit the growth of molds, yeasts, and bacteria. These inhibitors are specific to their intended food type. For example, sulfites are used to control spoilage in fruit-based beverages, while nitrates and nitrites are common in cured meats.

A few common antimicrobials are listed below. Those which also perform enzyme inhibition are marked with an asterisk (*).

Flavor enhancers contribute one of several basic flavors — bitter, salty, umami (pleasantly salty), and sour — to a food. (Sweeteners are technically flavor enhancers but are commonly treated as a separate type by manufacturers and standards bodies.)

Flavor enhancers are added to food products — such as ice cream, yogurt, margarine, and soy meat substitutes — which are perceived as bland after processing. Flavorings can be natural in the form of animal or vegetable derivatives as well as artificial.

Common flavor enhancers are listed below.

Naturally-occurring sweeteners such as sugar and honey have been in use for thousands of years. With increasing awareness of adverse health effects caused by excessive sugar intake, lower-calorie sweeteners were developed and were soon in widespread use. Sugar, however, is irreplaceable in many applications, as it adds unique texture, weight, and moistening properties to baked goods.

Sweeteners can be divided into two categories:

Food colorings are added to foods to make them appear more appealing. To a certain degree, a product's physical appearance affects its taste, as extensive testing has revealed that more visually attractive derivatives of the same product are consistently described as "better tasting."

Like other sensory enhancers, colorings can be natural or synthetic. Natural colorings include carminic acid, which is a red coloring derived from crushing the bodies of certain scale insects. Synthetically-derived natural colorings, such as flavonoids and carotenes, are reconstructed compounds identical to those naturally found in fruits or vegetables. Some additives which are primarily used for preservation or nutrition can be used as a coloring as well; for example, riboflavin is used as a B vitamin additive as well as an orange-yellow coloring.

Purely synthetic colorings and dyes are much more potent and stable than natural ones, allowing them to be used in much smaller concentrations. 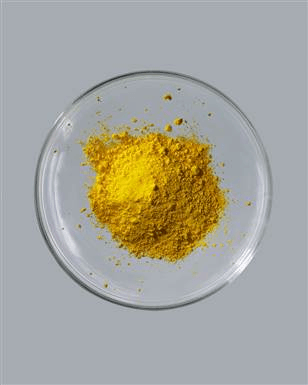 Food additive identification varies geographically. In the United States and much of the world, additives are referred to by their common chemical names, such as dimethylpolysiloxane (an anti-caking agent) or tartaric acid (an antioxidant).

European countries — the European Union (EU) and Switzerland — standardized food additive naming and numbering in the 1989 Class Names and International Numbering System for Food Additives, also known as the INS. This standard provides a three digit number (and a differential suffix code, if necessary) for each approved additive. Because it is an open list, additives may be delisted or newly added with subsequent revisions, the last of which occurred in 2011.

INS numbers are informally referred to as "E numbers." Informally, this phrase has taken on a pejorative quality in some countries, as many all-natural food manufacturers label their products as "free of E numbers."

The table below lists some E number classes and ranges, as well as some common example additives. It is important to note that classes are further broken down by orders of 10; for example, E410-E419 represents natural gums within the larger class of thickeners, stabilizers, and emulsifiers. The E1100-E1599 range is reserved for new chemicals which do not fall into existing classes.

(For a full list on INS additives, please see the full standard linked in the References section below.)

In the United States, the Federal Food, Drug, & Cosmetics Act (FD&C) — the set of laws which grants power to the Food and Drug Administration (FDA) — approves food additives and names colorings. All new additives require premarket testing by the FDA, except those considered exempt because they are "generally regarded as safe" (GRAS).

The FD&C certifies nine different synthetic dye colorings, with two — Orange B and Citrus Red #2 — limited to specialized uses. The nine additives are:

Food additives are tightly regulated by regional and international legislation. Within the European Union, new food additives often take a decade or more after inception to reach store shelves due to mandated approvals. This process includes five years of safety testing, two years of Food Safety Authority evaluation, and up to three years of EU-wide approval. 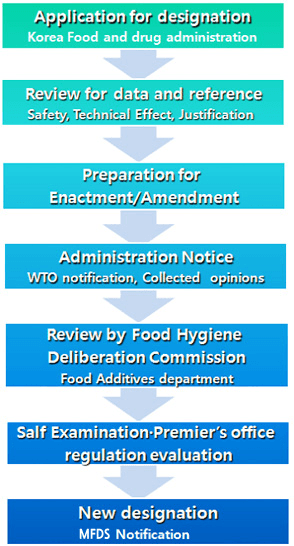 A typical modern food additive approval process - this one from South Korea.

Despite strict standards in the United States and EU, consumer concerns have risen as food additives become more widespread. Research has shown that certain additives or combinations of additives result in increased risk of child hyperactivity, cancer, heart disease, obesity, and digestive problems. The FD&C colorings listed above have all specifically been linked to tumor growth in rats.

Sodium nitrite, which is used to preserve cured meats, is known to produce carcinogenic agents. This research has led many consumers to actively avoid processed foods containing synthetic additives, and has also resulted in the rise of the organic and all-natural food movements. Despite these extensive tests on animals, there is no scientific consensus as to whether food additives are truly harmful to humans.

On the opposite side of these arguments, additives — especially those used for preservation — increase food safety by discouraging the growth of bacteria and microorganisms. Nutritional additives also allow the addition of vitamins and essential minerals to foods which would not normally contain them.

Food additives may be produced, tested, and used based on various standards and specifications. Example standards include:

Food and Agriculture Organization of the United Nations