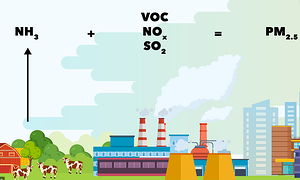 Air Pollution : Ammonia and Hydrogen Sulfide and Ambient Calibration
The most common air pollutants include carbon monoxide, ground level ozone, nitrogen oxides, particulate matter, sulfur oxides, and volatile organic compounds. There are other pollutants that are important both due to their impact on the environment and on public health. We will take a look at two such pollutants, ammonia and hydrogen sulfide.

Ammonia
At room temperature, ammonia (NH3) is a colorless gas and an irritant with a pungent odor. The main sources of ammonia are natural. In the environment, NH3 is part of the nitrogen cycle, being produced naturally from decaying organic matter, including plants, animals and animal wastes. About 10% of naturally occurring ammonia is thought to be a result of wildfires. Ammonia is also one of the most commonly produced industrial chemicals in the United States. The vast majority of produced ammonia is used as fertilizer. Other applications include use as a cleanser, a refrigerant gas, and in the manufacture of plastics, pesticides, and other chemicals.
So how does NH3 affect the environment? The ammonia released into air is associated with a localized unpleasant odor, which is detectable even at low concentrations. Low concentrations of ammonia in soil are normal and required for plant nutrition, however multiple issues arise as the concentration rises. Excessive NH3 can harm vegetation and is toxic to aquatic organisms. Over-fertilization can lead to excessive levels that then leach into groundwater and other water sources. Too much NH3 in the air can enter the surface waters following rainfall leading to algal blooms due to over-enrichment. These can occur at great distances from the original source of the NH3.

Ammonia gas also impacts the environment through interaction in the atmosphere with other gases. The primary products of these interactions are fine particulates (PM2.5) and ammonium (NH4+) aerosols, which can negatively impact human health as respiratory irritants (img source). Unlike the relatively short life of NH3, both PM2.5 and NH4+ exist in the atmosphere for days and can be spread over hundreds of miles. Recent research has studied the role of ammonia as a key ingredient of smog. A study conducted by 6 universities and a variety of state and federal agencies looked at the smog that can linger in Salt Lake City. With mountains encircling it, the basin city is susceptible to “inversions,” where a high pressure system traps colder air in the city. In their research, they found the smog was mostly composed of PM2.5. About three-quarters of the particles were made up of ammonium nitrate. (read more on the Wasatch Front Ammonia and Chloride Observations (WaFACO) study)

The monitoring and reduction of ammonia is becoming increasingly important, as levels continue to rise globally. The European Environment Agency recently noted that while most air pollutants are showing reduced levels, the levels of ammonia, primarily from agricultural sources, have continued to rise each year for the past four years (EEA Report). Between 2014 and 2017, the levels increased 2.5%, despite 21 of the 27 EU countries being below the current ammonia emissions ceiling set out in the NEC Directive (2016/2284/EU). There is concern that without a significant reduction of the allowed ceiling, far fewer countries will be able to meeting the full reduction commitments for 2020 and 2030. In early 2018, the United Kingdom announced an air quality plan that includes reducing the nation's ammonia emissions from agricultural sources by 16% by 2030.

While the EU is looking to slash the ammonia emissions, the United States has not made limiting ammonia a priority. They have instead targeted other key smog ingredients, including nitrogen and sulfur oxides (from combustion sources) as well as particulates. There are a number of reasons for the lack of regulations. US agriculture-related groups argue that it would be a burden for them to monitor and report these levels while the lack of routine measurement makes setting regulations difficult. With research now beginning to show the role of ammonia in particulate levels, U.S. regulators could face increased pressure to act....read more.....

About Environics - World Leader in Gas Mixers, Gas Dilution and Calibration Systems
Environics is a world leader in computerized gas flow instrumentation. Our headquarters for design, manufacturing, sales and service is located in a modern 11,000 square foot facility in Tolland, Connecticut. We are ISO 9001 certified, having received ISO 9001 Quality Systems Certification in April, 1997.

We are a profitable, privately held company, founded in 1986 and incorporated in the State of Delaware.  As of April 2011, we are a Women Owned business, certified through the Woman Owned Small Business Program run by the United States SBA.  Our five-year projections show continued growth through the introduction of new products and product innovations. All service is handled factory direct. Sales are handled direct and by selected manufacturers representatives and distributors worldwide

Environics Technology
Our gas mixing technology is based on very precise control of thermal mass flow controllers (MFCs). Normally, thermal MFCs offer an accuracy +/- 1% of full-scale flow. However, when combined with Environics computerization and calibration, this accuracy specification is improved to +/- 1% of setpoint. The Full-scale error vs. Setpoint error document shows the 10x improvement in accuracy of a thermal MFC when using Environics controlling technology. Our calibrators and dilution systems exceed the accuracy required by the EPA for Ambient Calibrators (ref: Method 205, 40CFR51, 40CFR60, 40CFR75). For more technical information, see our Technical Documents section, which contains current articles and CFR's pertinent to our technologies.

We encourage you to challenge us with your most difficult requirements. We specialize in custom systems. We have thousands of systems in the field and have developed an extensive library of applications and solutions to meet our customers' needs. The application of our technology has enabled us to become the world leader in user-friendly computerized gas flow instrumentation.