RF power meters measure the strength of radio frequency signals in dBm or watts. They are also referred to as RF wattmeters. Their ultimate objective is to calculate transmitter output.

RF power meters operate at specific frequency ranges and energy levels to quantify the power from transmitting devices. Measurement methods vary depending on the meter employed.

Evaluation of the energy output attributable to a source is a crucial factor when designing RF and microwave amplifiers. Wattmeters are engaged in computing intensity levels when evaluating the performance of unique components under testing. Typical units are exploited by RF design engineers, with different configurations available for numerous modes of operation. The vast majority of products in use today are digital. They convert analog signals to digital indicators with four digits representing energy in watts, milliwatts, microwatts, or decibel milliwatts (dBm). Readouts in decibels (dBm) are the most common form of display for the calculations implemented by microwave engineers.

Thermistor RF power sensors: These devices rely on thermistor-powered sensors. They offer a convenient approach to obtaining precise data and facilitate substitution of DC power to enable system calibration. The detectors rely on energy dissipated as heat in an RF load. Elements that detect these temperature increases include:

Thermistors combine a balanced bridge technique. The resistance associated with the structure is kept at a uniform level with the help of a DC bias. When power dissipates, decreasing the resistance, it reduces the bias maintaining the bridge balance. The drop in the bias indicates dissipation of energy. Advanced mechanisms come with an extra set of thermistors to compensate for surrounding temperature changes offsetting the readings.

Thermocouples produce true averages of power as they are pure heat measuring sensors. As a result, they are capable of delivering average readings for all required signal formats. The principle of thermocouples is based on the effect of a small potential caused by the junction of dissimilar metals. When integrated with sensors, the devices are constructed within a single silicon integrated circuit chip. They function by detecting heat dissipation caused by a source located in the load resistor.

Alternative sensor modules found in RF wattmeters deploy diode rectifiers in generating an output. The elements feature arrangements allowing the sensor to dissipate the energy in a load source. At this point, the diode detector rectifies the voltage signal output across the load. This indicator assists in ascertaining the power level in the load.

This category has the following advantages:

The stored charge effects associated with conventional diodes limit the operational capacity of the detectors. Schottky barrier diodes are given preference due to their nominal stored charge levels. They feature reduced forward conduction points than most diodes. The minimum turn-on voltage characterizing Schottky components limits even the lowest detectable signal intensities. At present, gallium-arsenide (GaAs) semiconductor units are preferred due to their superior functionality versus silicon alternatives. Gallium arsenide diodes incorporated in radio frequency detectors are fabricated with planar-doped barrier technology. Though these items are more expensive, they offer marked benefits for microwave frequency detecting systems.

Diode-based equipment gained wider acceptance in modern day solutions. The capability for digital signal processing of the diode's output permits an individual detector to support numerous characteristics that are not backed by heat-based mechanisms. When diodes are engaged in detecting the envelope, a selection of waveforms is quantifiable. 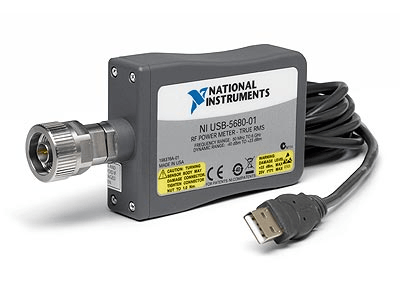 RF power meters serve a broad scope of applications, including:

Several considerations require attention when selecting RF power meters. Devices employing radio frequency power sensors based on heat are ideal for integrated measurement activities. On the other hand, diode-powered detectors are chosen when readings of a base level or instantaneous nature are necessary.

A system's suitability for recording unique indicators such as average power, pulse power, or peak envelope power must be considered as well. Absorptive type RF power meters are recommended for obtaining laboratory data of exceptional accuracy while through-line type instruments are appropriate for field tasks.

Check manufacturer's specifications to ensure a product is capable of accommodating any intended purpose.