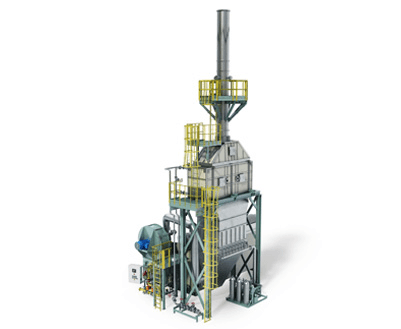 g environment to break down additional hydrocarbons and react with NOx. SCRs differ as they incorporate a gaseous or liquid reductant, generally ammonia or urea that is added to the exhaust gas stream. The exhaust gas mixes with the reductant and travels through several catalytic layers, where a reaction between NOx emissions and the injected reductant occurs. The reaction converts the NOx emissions into N2 and water vapor. The benign elements are then released into the air through a smokestack or exhaust pipes.

One common problem with selective catalytic reducers (SCR) is that they operate well only within narrow temperature bands. Consequently, control units are required to ensure the exhaust gas temperatures are within the range that will allow the catalytic reaction to occur.

Selective catalytic reducers (SCR) differ from selective non-catalytic reduction (SNCR) as they incorporate a catalyst to increase the reaction between NOx emissions and the liquid reductant, typically urea or ammonia. The use of a catalyst also allows an SCR system to operate at much lower temperatures (340° C to 380° C or 650° F to 720° F) than a SNCR system (870 °C to 1200° C or 1600° F to 2200° F). The SCR system increases the efficiency of NOx removal to achieve NOx reduction of up to 75% or more.

Flue gases exiting a power generation system or industrial processing equipment must be pretreated before entering the SCR system. Filtration units extend catalyst life by removing sulfur, soot, and other particulate matter. Air heaters are used to regulate the temperature of the flue gas before entering the SCR system. Industrial scale SCR systems that accommodate flow rates greater than 100 MMBtu/hr consume 20,000 to 100,000 gallons of reductants a week and have an average catalyst life of 25,000 to 40,000 hours.

Diesel and marine engines incorporate SCR technology. Thermal durability is particularly important for these SCR applications as the diesel particulate filter with forced regeneration generally results in increased operating temperatures. Combustion engines with SCR technology inject DEF or other urea based fluids into exhaust stream prior to the catalytic converter. Injection concentrations are controlled through a metering device and are proportional to the engines load and NOx emission measured upstream and downstream from the SCR system.

Selective catalytic reducers (SCR) are often the technology of choice for meeting emission standards. The Environmental Protection Agency (EPA) implemented the Clean Air Act in 1970 followed by amendments in1990 that required major stationary sources of NOx to install and operate reasonably available control technology. NOx emissions from industrial power plants in the United States then decreased by as much as 50% by 1995. New amendments to the clean air act target the automotive sector while global emission standards governing air pollutants are governed by regional authorities including European Union (EU), China's State Environmental Protection Administration (SEPA), and the Ministry of Environment (MOE) of Japan.

ISA 77.82.01—This standard will address the control functions associated with the selective catalytic reduction systems on fossil-fired steam boilers greater than 200,000 lbs/hr and combustion turbines greater than 25 megawatts.