Calcite polarizers are crystals used to separate unpolarized light into two separate plane polarized beams. Unpolarized light that enters a birefringent crystal is broken into two separate plane polarized beams. These are usually referred to as the ordinary (o-ray) and extraordinary (e-ray) rays. Calcite crystal is a natural birefringent material, which may be ground, cut, and polished to exact angles creating optical axis, making it a useful polarizer. 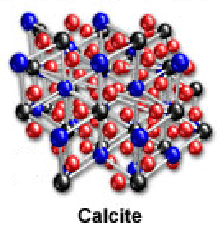 Calcite is a commonly used birefringent material. Due to its hexagonal shape, the birefringence (also known as double refraction) of calcite is extremely large, with indices of refraction for the o- and e-rays of 1.6584 and 1.4864 respectively. This gives total internal reflection critical angles of 37.08° for the o- and 42.28° for the e-rays when in contact with air. Linear polarization occurs for any angle between those two values because the o-ray will be totally reflected but the e-ray will be partially transmitted. This birefringence is so large that a calcite crystal placed over a dot on a page will reveal two distinct images of the dot. The ray through the crystal known as the o-ray behaves like glass and therefore one image will remain fixed as the crystal is rotated. The e-ray will cause the other image will rotate with the crystal, tracing out a small circle around the ordinary image.

The principle of calcite polarizer operation is based on crystalline materials having different indices of refraction associated with different crystallographic directions. Birefingent materials contain two different mineral crystals, with two distinct indices of refraction. When the y- and z- axes have equivalent crystalline forces, then the x-axis is unique and referred to as the optic axis of the material. An o-ray is caused by the independent propagation of light along the axis and an electric field perpendicular to the optic axis. An e-wave is caused by the electric field being parallel to the optic axis. 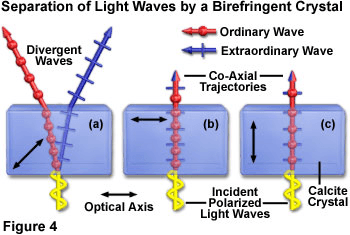 Glan Thompson polarizers are used in moderate power, visible wavelength applications where a large field of view (FOV) is important. They have high extinction ratios, < 10-5, and wide acceptance angles. Glan Thompson polarizers provide high purity linear polarization for broadband sources or multiple laser wavelengths. The large acceptance angle of these polarizers allows them to be used in highly converging or diverging beams. S-polarization is transmitted with Ts >90%, while p-polarization is reflected and absorbed into the housing. They are made from the highest grade calcite and cemented together using a UV epoxy. The optic axis is parallel to the entrance window and prism angle thereby providing a larger FOV than Glan Laser or Taylor designs. The ordinary ray is the output ray and the extraordinary ray is absorbed on the escape window.

Glan Taylor polarizers have large extinction ratios, and are ideal where the rejected beam is not required. Glan Taylor polarizers are made from high grade calcite. They are similar to the Glan Laser polarizer in that the optic axis is perpendicular to the escape window and they use an air spaced design with a prism angle close to the Brewster angle. The chief advantage over a Glan Thompson design is a lower insertion loss and lower length to aperture ratio (1.4). Unlike the Glan laser, these do not have a polished escape window (i.e. only the p-polarization is available on the output). Therefore the maximum power rating is lower and the escape port is coated with an absorbing material to minimize back reflections.

Glan Laser polarizers are a form of Glan Taylor calcite polarizers that are intended for use with high power beams. Glan Laser polarizers are designed for demanding applications requiring extreme polarization purity and high resistance to laser damage. These polarizers are air-spaced, select-grade calcite prism pairs with the prism interface angles optimized for minimum insertion loss. Two escape ports provide an exit for the rejected polarization component, avoiding dangerous absorption of laser power by the polarizer housing. This allows these polarizers to be used in Q-switched laser cavities and other multiple pass applications. Glan Laser prisms have the optic axis oriented perpendicular to the escape window providing for a much higher transmission. With an air-spaced design and prism angle cut close to the Brewster angle, these polarizers have minimal insertion loss.

Rochon polarizing beam splitters are one of the earliest designs. Both ordinary and extraordinary beams propagate collinearly down the optic axis in the first prism under the ordinary refractive index. Upon entering the second prism the ordinary beam experiences the same refractive index and continues undeviated. The extra-ordinary beam, however, now has a lower refractive index and is refracted at the interface. The angle of refraction is further increased at the calcite/air exit surface. Standard Rochons are manufactured with a cut angle of 45°, producing a separation of 10° at 500nm. The separation angle can be varied to suit customer requirements by changing the cut angle. Since both ordinary and extraordinary refractive indices vary with wavelength, it follows that the separation will also change similarly.

Wollaston calcite polarizers split beams of light into two mutually orthogonal, linearly polarized beams, convenient for double imaging of a single source. Wollaston prisms are beam splitting polarizers like the Rochon prism; however the optic axis in the first prism is perpendicular to the input beam. This creates two output beams with nearly symmetrical deviation. Like the Rochon, the angle of deviation for the Wollaston prism is a function of wavelength.

There are several important performance and polarizer surface criteria to consider when selecting a calcite polarizer. More information on these specifications, including wavelength ratio, extinction ratio, transmittance, and surface quality, can be found on Engineering360's How to Select Linear Polarizers.