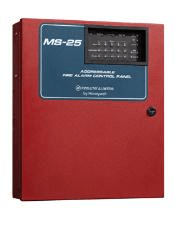 Traditional FACPs are hardwired to each device in the system. The panel recognizes when the current or resistance on a circuit increases from the activation of a detection appliance, such as a smoke, heat, or flame detector or a manual call station. Wireless panels and accompanying devices are radio-linked.

A panel accordingly triggers visual, auditory, and occasionally other types of notification devices to alert inhabitants of an emergency situation; this most often results in the building's evacuation. Important and invaluable structures will have a fire suppression system consisting of water sprinklers, dry or wet chemical dispersal systems, or a gas blanketing system. Simultaneously the panel informs a monitoring center of the alarm status and individuals at the receiving location determine ensuing procedures. The panel can also control HVAC systems, building automation controllers, access points, and elevators to isolate the fire or route personnel during an emergency.

An FACP usually contains these components.

Interface: Provides keys so operators can input commands to the FACP, often in response to updates supplied by an integral display.

Relays: Typically used to interface the FACP with other building systems, but can also be used to link appliances.

Phone jacks: Links the FACP to a digital communicator which will sever all phone connections not related to the FACP.

Cabinet: This mounted, metal casing shields internal components but typically allows access to the display, and possibly the keypad. The cabinet is easy to visually identify and protects the FACP from tampering and mild environmental threats (dust, moisture, etc.).

Modern FACPs are distinguished by how fire alarm devices are wired to the panel, which also indicates how the panel identifies the location of a fire.

This type of FACP terminal pinpoints which component or components of the fire alarm system have been activated, significantly narrowing the probable location of the fire and providing responders a better chance to extinguish the fire before it spreads. Addressable FACPs connect all system appliances using a signaling line circuit with both ends terminating at the panel. It is more reliable than a conventional FACP due to the fact that if one side of the wire is severed, loop isolation modules ensure the device can communicate with the control panel. Addressable FACPs are more expensive but are easier to install, and their complete versatility may prove efficient in the long run, especially for medium- to large-sized buildings.

Wireless FACPs are short range devices that are a common, modern, and credible alternative to hardwired FACPs. Panel and appliances communicate at a low transmission power level in accordance with legislation. This communication can be unidirectional (transmitter→receiver) or bidirectional (transceiver). System appliances are typically battery powered, and there is a low chance FACPs will create or receive RF interference. The most common modulation schemes and data transmission protocols are amplitude shift keying (ASK), frequency modulation (FM), and frequency shift keying (FSK). Wireless detection and alarm devices have a maximum range of 250 m, but signal repeaters, networked panels, and additional nodes extend this matrix. Several hundred devices can be uniquely identified by some wireless FACPs.

Also known as collective FACPs, this type of control panel sections the structure into zones. Each zone has devices wired in parallel, and therefore the panel serves to identify which zone of detection equipment has been triggered; the panel only displays the alarm or fault status of the circuit, but this type of protection is usually sufficient for smaller-sized buildings. Since each zone is individually wired to the panel, if the circuit is broken integrated devices will become unresponsive. Conventional FACPs have less capital expense than the addressable variety, but have longer and more costly installations.

Large buildings and campuses are best protected by multiple panels that have been linked within a local area network and communicate via a proprietary protocol (BACnet, Arcnet, etc.). All integrated detection systems can be addressed and monitored from a single panel or monitoring station. The redundancy prevents system downtime from failures or maintenance. Network hierarchies determine which panel has priority during an alarm.

Wireless panels are often linked via mesh networking, a system where each appliance is outfitted with a transceiver and can communicate with other local devices. This is useful in complex, large, and unpredictable environments. Hardwired panel networks must determine with which layout topography to wire panels.

It is possible to create a hardwired/wireless hybrid FACP network through the use of translator units.

A comprehensive FACP will provide these capabilities. 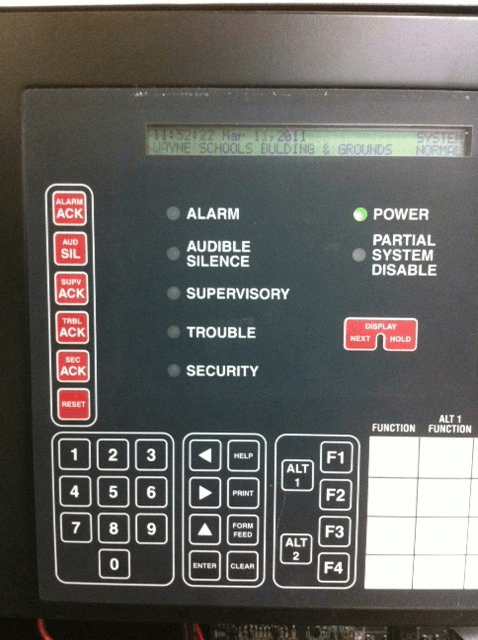 Acknowledge (Ack): A user-input command to indicate the receipt of an alarm, trouble, or supervisory signal.

Circuit supervision: By applying a pulsed or time-dependent variable voltage to the circuit, the panel and operator can determine if there is a fault in the alarm circuit.

DC power: The panel has an integrated battery or capacitor to run the panel in the event AC power has been discontinued.

Disable mode: Appliances in zones or circuits of the system can be temporarily suspended from activating.

Drill: Activates alarm appliances only for the purposes of conducting a building evacuation exercise.

Flash test: Tests the status of LED indicators on the panel.

Reset: All system appliances and the panel are reverted to monitoring status.

Silence: During an alarm status, it eliminates all audible alarm devices, but may or may not shut off strobes or other visual alarms.

Supervisory: Communicates that a portion of the fire alarm system has been disabled, or that a low-priority detector has been activated.

Trouble: This indicates that a device, circuit, or power supply has been compromised.

Walk test: Alarm inputs will operate notification appliances for a predetermined increment. This allows personnel to inspect devices without having to continually trigger the alarm.

Alternative operations: The panel can elicit security personnel or alert building inhabitants of localized, non-fire threats, such as a tornado or flood. Audible notifications are usually limited or disabled.

Annunciator: LEDs visually indicate the status of devices wired to the FACP, which is integral or connected to the panel.

Auto-program: This mode will automatically identify all devices on the circuit and assigns each an address, as well as determine appliance activation sequences.

Connectivity: Panel has ports or configurations for plug-in external keyboards or printers.

Pre-alarm: A two-stage alarm that requires more than one device to be activated or a preconfigured amount of time to pass before initiating the notification phase.

Remote access: Panel can be programmed or interrogated from a central control station.

Second priority: Allows a secondary monitoring system, such as a security or building control system, to have an input into the FACP. This may or may not result in an alarm triggered by the FACP.

An essential component to most commercial, networked, or large-scale FACPs is a centralized monitoring station where the FACP reports its operational status. This station can be an on-campus security or management office; a contracted third-party monitoring center; or, rarely, municipal emergency services. Furthermore, the panel can be operated from this remote location. This operational redundancy ensures that the alarm panel can be addressed even if inaccessible due to smoke or flames, and that appropriate individuals are notified. Older-style FACPs and those located in rural settings typically link to control centers via POTS (plain old telephone service). More recent FACPs link via web access, cellular networks, or RF transmission.

Local and regional governments often adopt codes that have been outlined by trade and standards organizations as official policy, such as the International Building Code or National Building Code of Canada. Fire alarms and associated instruments are typically regulated by a specialized body or panel, and the aforementioned codes utilize National Fire Protection Association 72. Underwriters Laboratories evaluates fire alarm products and records conclusions in an effort to provide code-making bodies with the most relevant and up-to-date data regarding life safety code.

As a result, there are several important documents to reference when considering fire alarm control panels, and they have been listed according to priority.