Signal isolators provide electrical (galvanic) isolation between the input and output circuits. They couple the signal to the output through a transformer or optical isolator. Signal isolators also break the direct electrical galvanic path between two or more loop points. They protect against dangerous measured-variable voltages and increase protection from surges and spikes. For example, if a differential pressure transmitter is sending a 4-20mA measurement to a receiver, such as a recorder, and the two ground points are different, an additional and unpredictable amount of current can be introduced into the loop, distorting the true measurement. This current path is known as a ground loop and is a very common cause of signal inaccuracies, along with the current path having two grounds, the ground at different potentials, and a galvanic path between the grounds. In order to remove the ground loop, the galvanic path between the grounds must be removed.

Signal isolators are especially important since the other two causes for ground loops cannot always be removed safely. The ground may be there for safe operation of the electronic device.

There are two prevalent methods for galvanic isolation.

Optical isolation uses light to transfer a signal between elements of a circuit. The isolator is usually in a small module mounted on a circuit board. The isolation circuit is composed of an LED and a photo-sensitive detector, such as a phototransistor. The insulating air gap between the LED and the photo transistor serves as the galvanic separation between the two circuits.

Transformers are very efficient at transforming AC signals. This is a disadvantage since many process control signals are DC and must be changed into an AC signal so they can pass across the transformer. Once passed, they have to be rectified and amplified back into the desired DC signal output.

Signal isolators are often specified by what the isolation levels are from input to output. Two-way (input-to-output) isolation is used to describe a 2-wire transmitter since it is powered from either its input or output terminals. 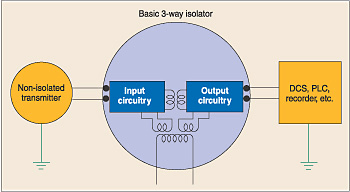 Three-way isolation is defined as input-to-output, power-to-input, and power-to-output isolation. It is important to note if the isolator is powered by a DC supply which could cause a problem with common mode noise, or failing to switch power supply, creating unwanted output signal errors.

If the signal isolation is a 4-wire device it may require 24Vdc, 110Vac, or 220Vac to operate its circuits. For these devices, it is important to ensure the isolator has full three-way isolation.

Due to the widespread application of signal isolation many devices are available with built-in safety features for use in various environments.

For example, intrinsically-safe, nonincendive, and explosion proof options are all available for hazardous areas within a plant. Hazardous conditions also include the amount of heat the electronics will be exposed to while installed in the plant.

Other devices may need protection from radio frequency interference (RFI) and electromagnetic interference (EMI) which can cause unpredictable and non-repeatable degradation in instrument performance.

Variable frequency drives (VFDs) are also known to cause noise that interferes with signal isolators and are common in plants. This interference can be avoided by installing a 4-wire isolator to filter the unwanted common mode noise.

Signal isolators are used in industrial, medical, and other environments in which electrical isolation is essential for safety. Signal isolators can also be used to amplify signals, enable instruments to be added to an overburdened loop, or to step down dangerous, high-voltage signals to safer levels.

Specific examples of applications include resistance input for use in RTD, slidewire, strain, and potentiometer transmitters, and current/voltage isolators for use as alarm tripping and deviation alarm notification.