Ion lasers are lasers which use ionized gas as their lasing medium.

As discussed in the Lasers Selection Guide, lasers consist of three components: an energy source (or pump), a gain (also known as laser) medium, and an optical resonator. These components are labeled in the image below. The pump provides energy which is amplified by the gain medium. This energy is eventually converted into light and is reflected through the optical resonator, which then emits the final output beam. 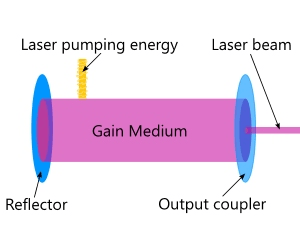 All gas lasers rely on the excitation of gases to amplify energy; considering the image above, the gas functions as the laser medium. Ion lasers in particular are comprised of the following components:

Argon and krypton ion lasers work in a fashion similar to other gas lasers (HeNe or carbon dioxide types, for example), excepting the fact that ion lasers excite positive ions instead of atomic particles in general. Because ion excitation requires considerably more energy than that used in other gas lasers, ion lasers use significantly more pump current and generate more heat; for this reason they are almost universally water-cooled.

The image below shows a deconstructed ion laser. Note that the majority of the lasing operations occur within the ceramic tube, which contains the gas as well as the anode and cathode necessary to transfer pump current. Like many ion lasers, this particular device includes equipment necessary to establish a magnetic field around the laser medium, which serves to increase lasing power by better containing the excited plasma within the tube.

Ion lasers are expensive relative to other gas lasers; this is largely due to the increased need for pump current (resulting in a larger power supply) as well as the high cost of the gas tube itself (a previously used gas tube alone may be sold for thousands of dollars). A multiwatt argon laser requires tens of kilowatts of electrical power, and even a 20 mW laser must be pumped using hundreds of watts. For this reason, ion lasers are typically relegated to high performance applications, as discussed below, and are less-commonly used by laser hobbyists.

Argon and krypton lasers are typically used in high performance applications due to their high cost and demand for electrical power. The uses listed below are typical for ion lasers.

The use of argon or krypton within an ion laser tube determines several of the laser's characteristics, including ideal wavelengths and power.

Argon ion lasers typically feature higher power ratings than krypton types. They are most often used within the wavelength range between 450 and 550 nm, although some low power argon lasers are effective on certain ultraviolet (UV) and near-infrared (NIR) wavelengths. UV wavelengths are particularly difficult to obtain and can only be achieved by double ionized transitions, resulting in the need for even higher pump current to produce disproportionately small output power. Argon lasers are most effective (and most frequently used) at 514.5 nm (green) and 457.9 nm (blue).

Krypton ion lasers operate identically to argon types but use different wavelengths. The ideal krypton laser wavelengths — 647.1 and 676.4 nm — both produce red beams. Like argon lasers, krypton lasers can be manufactured to emit UV spectrum radiation, but with mixed results.

Safety is an important topic when discussing ion lasers due to their relatively high power and high current requirements. A split-second direct exposure to a 200 mW laser emitting 100 yards away can cause permanent eye damage; in light of this fact, an 514.5 nm argon laser, which can emit up to 20 W of continuous power, is capable of considerable damage to an operator's eyes or skin.

To address the concerns above, the Center for Devices and Radiological Health (CDRH) — a division of the US Food and Drug Administration (FDA) — provides a laser safety classification scheme based on six product classes. Lasers are also specified by different classes described in the international IEC 60825 standard. The table below describes US domestic and international classes for laser safety.