Excimer lasers are powerful ultraviolet lasers which use a mixture of noble gases and halogens as a gain medium.

As discussed in the Lasers Selection Guide, all lasers consist of three components: a pump (energy source), a gain (or laser) medium, and an optical resonator. The pump provides energy which is amplified by the gain medium. This energy is eventually converted into light and is reflected through the optical resonator which then emits the final output beam.

Diagram of a basic laser. Image credit: Enlighten Your Mind

Like most gas lasers, excimer laser power is provided by an electrical current source. The laser medium is a tube filled with three different types of gases:

Excimer lasers rely on the interaction between the noble gas and the halogen gas to produce a high-powered beam. The current source pumps the gas medium using very short, high voltage pulses transmitted through metal electrodes; the pulse excites the gas atoms and causes them to fuse together into atomic pairs called dimers. (The term "excimer" stands for excited dimer.) For example, pumping an argon flouride (ArF) laser causes asymmetric molecules of ArF to form. Excimers only remain bound in an excited state, so that following the pulsed electrical discharge the atoms separate once again. While active, though, the excimers emit a burst of electromagnetic radiation before quickly dissociating into separate gases. This rapid dissociation prevents molecular reabsorption of the emitted radiation, making it possible to achieve high gain using a relatively small concentration of excimers. The radiation is then reflected by mirrors placed at both ends of the gas tube (representing the optical resonator) until the beam is emitted via the front mirror.

The image below lays out the basic parts of an excimer laser. Many such lasers include an integral fan as shown to reduce device corrosion. 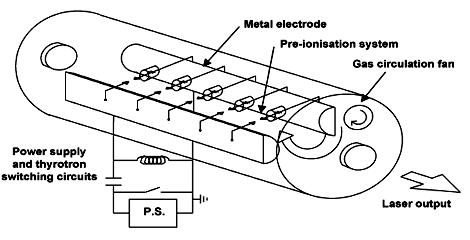 A basic excimer laser, explicitly showing all parts except the reflective mirrors.

An excimer laser's need for buffer gas (as described above) and other unique safeguarding materials stems from the fact that gases used in these lasers are highly corrosive. For this reason, they are often designed using materials such as stainless steel, polyvinyl, and teflon to prevent corrosion. While excimer lasers look nearly identical to CO2 lasers, using noble gases and halogens within a basic gas laser would result in almost immediate failure of the device.

The principal advantage of excimer lasers is that they are capable of producing a very small, precise spot at a very low (UV) wavelength. Excimer lasers are excellent for removing excess material through laser ablation due to the fact that they are able to precisely destroy material with little to no thermal buildup. This contrasts with carbon dioxide lasers, which rely heavily on thermal buildup to "boil off" material during ablation.

Other common excimer laser applications are listed below.

An excimer laser's wavelength depends upon its laser medium gases, while the wavelength in turn determines the laser's applications. For example, a 308 nm XeCl laser is most effective in skin surgery applications, while a 193 nm ArF device is commonly used in eye surgery.

Safety is an important topic when discussing excimer lasers due to their high power ratings within the UV spectrum. A split-second direct exposure to a 200 mW laser emitting 100 yards away can cause permanent eye damage; excimer lasers, which are capable of power levels of several hundred watts, are easily capable of considerable damage to an operator's eyes or skin.

Due to these concerns, the Center for Devices and Radiological Health (CDRH) — a division of the US Food and Drug Administration (FDA) — provides a laser safety classification scheme based on six product classes. Lasers are also specified by different classes described in the international IEC 60825 standard. The table below describes US domestic and international classes for laser safety.