Laser pointers (sometimes known as laser pens) are compact, handheld laser devices. They are typically used to highlight an object or point of interest by illuminating it with a bright spot of colored light.

As shown in the Lasers Specification Guide, all lasers consist of three components: an energy source (also known as a pump), a laser (or gain) medium, and an optical resonator; these components are shown in the image below. Essentially, the pump provides energy which is amplified by the gain medium. This energy is converted into light and is reflected through the optical resonator which then emits the final output beam.

While early laser pointers were pumped by helium-neon (HeNe) gas, nearly all modern laser pointers use electrically-powered laser diodes as their energy source. The image below shows a deconstructed laser pointer and identifies its main components. In the image, the 1064 nm laser diode — which is controlled by a separate circuit and current from a battery pack — represents the pump, the KTP/YAG crystal represents the pointer's gain medium, and the focusing barrel is the optical resonator. 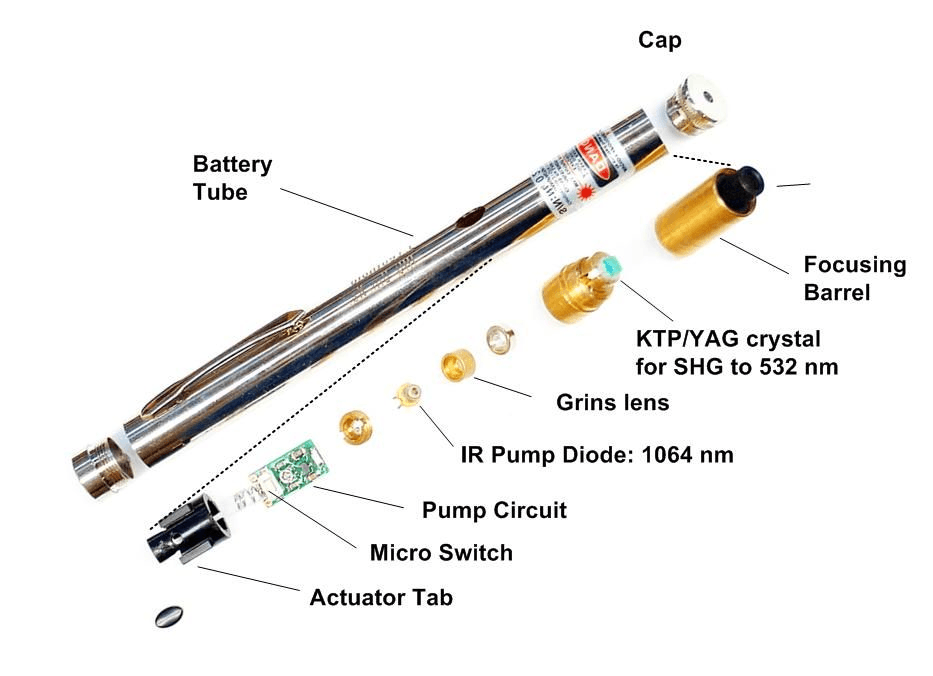 Laser pointers are used in a variety of industrial, commercial, and consumer applications, including:

The color of a laser pointer's dot or beam corresponds directly to the wavelength it emits. While all lasers are capable of emitting visible as well as ultraviolet and infrared light, laser pointers are typically confined to the visible spectrum due to the inherent need for a viewer to see its output.

Laser pointer colors often have a profound impact on the simplicity or complexity of the device. For example, a red laser pointer may consist of only a 671 nm laser diode, batteries to power the diode, and a simple lens to collimate the output beam. (Note that this is possible because the laser diode's output falls within the red spectrum.) Conversely, because laser diodes which output light in the green spectrum are not commonly available, green laser pointers must include more components. As seen below, a green laser pointer begins with an infrared 808 nm laser diode, which pumps energy through a yttrium aluminum garnet (YAG) crystal to further increase the beam's wavelength to 1064 nm. The energy then passes through a second crystal designed to double the radiation's frequency, therefore halving the beam's wavelength to 532 nm (which will produce a green output beam). Only after these changes in wavelength and frequency can a beam finally be emitted. This process is often replicated to produce blue and violet output beams.

The image below compares the physical structure of a red and a green laser pointer; note the increased complexity of the green device as noted above. The DPSS (double-pumped solid state) module shown within the green pointer is where frequency doubling takes place.

Laser pointer colors, as well as their specifications and attributes, are listed below.

As high power laser pointers have become widespread and freely available to consumers, manufacturers and industry groups have correspondingly increased awareness of the dangers of such devices. While most early laser pointers intended for use in classrooms were limited to 5 mW of power or less, inexpensive high power devices — emitting as much as 1000 mW of power — are now easily obtainable. Even a split-second exposure to a 200 mW laser emitting 100 yards away can cause permanent eye damage.

A typical laser warning sign, including specs and class.

To address the concerns above, the Center for Devices and Radiological Health (CDRH) — a division of the US Food and Drug Administration (FDA) — maintains a laser safety classification scheme based on six product classes. Internationally, lasers are specified by different classes described in the IEC 60825 standard. The table below describes both US domestic and international classes for laser safety.