Electronic filters are electrical circuits designed to remove, attenuate, or alter the characteristics of electrical signals. In particular these devices reduce the magnitude and the phase of unwanted signals with certain frequencies. A common example of an unwanted signal is noise, typically at 60 Hz. Filter operate by passing the system signal (voltage and noise) through a filter. If the filter is designed to suppress or attenuate the magnitude of the noise, its output will contain only (or mostly) the system signal. A typical radio receiver such as a car radio provides another good example. By tuning to a particular station the radio selects a particular signal while attenuating the signals of the other radio stations. This process is accomplished by a filter.

As an example, suppose a signal with frequency f1 is useful for a system, but an undesirable signal (noise) with frequency f2 has mixed with the useful signal, as shown below. Filters are used to suppress the second signal or reduce its amplitude. Part (a) of the figure shows the frequency response of the system, where the unwanted signal is prominent. After passing the signals through a filter designed to attenuate f2, the signal is reduced in amplitude with respect to f1.

The video below provides a comprehensive look at the material covered on this page, in lecture format.

Suppose a medical technician is measuring a 5 Hz EKG sine wave signal from a patient. The measuring device, however, picks up instrument noise of 50 Hz, so that the actual measured signal is a mix of the noise and desired signal. The two signals must be separated to eliminate the noise. A low-pass filter similar in design to the above diagram is ideal in this situation. The compounded signal is passed through a filter with appropriate design values so that it almost completely attenuates the noise and extracts the EKG signal, as shown below.

The first and second plot of the figure show the original EKG desirable signal and the noise, respectively. The third plot shows the compounded signal, the input signal to the filter circuit. The last plot shows the extracted output signal from the filter. This output is the desired EKG signal. Notice that the peak-to-peak value of the output signal is smaller than the original desirable signal (the first plot in the figure). This is due to the fact that the filter did not completely remove the noise, but this output is reliable enough as to use it as the EKG signal. The output can be improved by selecting better filter parameters. 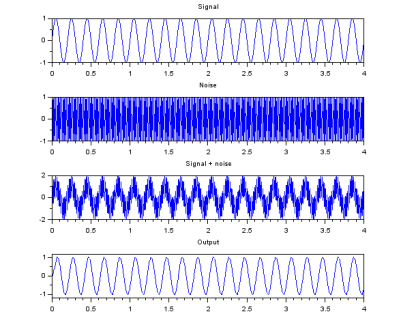 Filters are broadly classified according to the type of frequencies that the filter is able to suppress or attenuate. In this regard, there are four main categories: 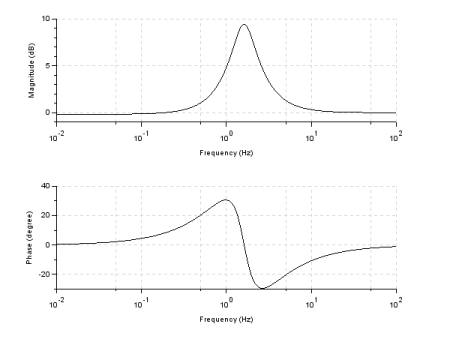 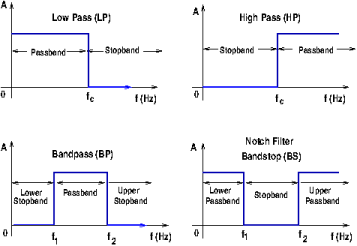 If the filter circuit contains only passive elements (resistors, capacitors, inductors, etc.) the value of the amplitude for an ideal filter is 1.0, but if the filter is built with active components (transistors, op-amps, etc.) the value of the amplitude (the gain) is different from 1.0. (For more information about passive filters, visit the Passive Filters Specification Guide.)

It is convenient to express the amplitude of the response in decibels (dB). The following equation converts the amplitude from raw numbers (ratio) to decibels.

For passive filters the constant amplitude expressed in dB is zero, or 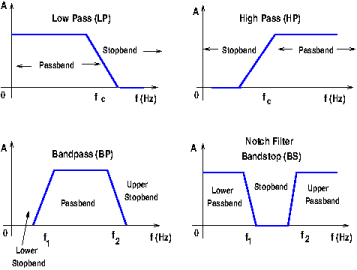 However, this figure still does not represent a practical, real-world filter. The response amplitude passband is typically not a straight, flat horizontal line: it may have attenuation ripples. The transition is not a straight line either. There are oscillations produced by real components that must be taken into account. The stopband may have ripples as well. A more accurate depiction of the frequency response is shown in the low-pass filter response graph below.

As shown in the above graph, there are several parameters in a practical filter:

The nominal value in this figure is 1.0, but it can be larger, particularly in active filters.

The most important response shapes are named after a researcher who studied the particular filters. These include Butterworth, Chebyshev (types I and II) , elliptic (or Cauer), and Bessel types. Each one of these filter types has a particular advantage in certain applications.  The characteristics of four low-pass filters, each one of three-poles and cutoff frequency of 10, is shown below. 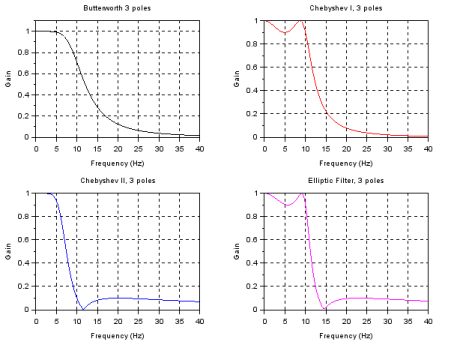 For the system shown above the transfer function is

where Vi(s)  and Vo(s) are the input and output voltages and s is the complex Laplace transform variable. In terms of the frequency of the system the Laplace variable is given by

where ω=2πf is the angular frequency in radians per second and σ is the Neper frequency in nepers per second. For casual systems with output dependent on present and past inputs only, σ=0. Therefore s=jω for the filter's characteristics.

Most electrical systems are frequency-dependent because the impedances of capacitors and inductors are frequency dependent, given by

or, for a capacitor with capacitance C (farads)

and for an inductor with inductance L (Henry)

Two important sub-equations are derived from the transfer function. The amplitude response represents the magnitude of the complex transfer function as a function of frequency. This describes the effect of the filter on the amplitudes of input signals at various frequencies. The second sub-equation is the phase response of the filter. This equation tells us the amount of phase shift introduced in sinusoidal input signals as a function of frequency. A phase shift of a signal represents a change in time of the output with respect to the input.

Replacing s with jω in the transfer function equation determines the amplitude and phase response. The amplitude response is the magnitude and is given by

and the phase response is written as

H(s) is a rational function in s and with real coefficients. It is convenient to factor the numerator and denominator polynomials and to write the transfer function accordingly:

where N(s) and D(s) are the real coefficient numerator and denominator, respectively and K=bm / an. In this equation the zeros (zi) are the roots of

and the poles pi are the roots of the equation

and the transfer function becomes

Likewise, for the denominator.

So if a Butterworth filter has 3 poles, and no zeros the slope of the transition band is -60 dB/decade.

As an example consider the second order low-pass filter with implementation as shown in the following figure.

The transfer function can be found by applying the voltage divider rule across the resistance:

Substituting the values of the circuit, the equation becomes

Factorizing the denominator, it becomes