Rechargeable (or secondary) batteries contain active materials that can be regenerated by charging. All batteries have positive and negative terminals, marked (+) and (-) respectively, and two corresponding electrodes.  The electrodes must not touch each other, and are separated by the electrolyte, which facilitates the flow of electric charge between the electrodes.  A collector conducts the charge to the battery's exterior and through the load.

When a battery is inserted into an electrical device, the device completes the circuit between the two terminals and triggers electrochemical reactions within the battery.  The anode undergoes an oxidation reaction with the electrolyte and releases electrons, while the cathode undergoes a reduction reaction and absorbs the free electrons.  The product of these two reactions is electricity, which is channeled out of the battery and into the device.

When a secondary battery is recharged, its electrodes undergo an opposite process to the discharging action described above.  As the battery charger passes electricity through the battery, its cathode is oxidized and produces electrons which are then absorbed by the anode.  When the battery is fully charged, it can be connected to a load and discharged again.

Manufacturers produce batteries using many different types of chemicals.  A battery's chemistry determines its size, voltage, and intended use.

Nickel cadmium (NiCd) batteries use nickel oxide hydroxide and cadmium as electrodes.  They are commonly available in consumer sizes as well as in battery packs.  NiCd batteries are manufactured for a wide range of applications, from toys and phones to electric vehicles and aircraft.

Silver oxide batteries use zinc and silver oxide as the negative and positive electrodes, respectively.  They have a very high energy-to-weight ratio but are expensive to produce due to the cost of silver.  They are typically manufactured as small cell batteries in order to limit the amount of silver used.

Nickel-metal hydride (NiMH) batteries are similar to the NiCd type and feature a metal alloy electrode in place of a cadmium one.  NiMH batteries are a relatively recent development, and can have two to three times the capacity of a NiCd battery.  A low self-discharge NiMH (LDS NiMH) battery, which features a longer shelf life, was introduced in 2005 by Sanyo.

The following table compares the most common types of secondary batteries.

The GlobalSpec SpecSearch database contains information about a variety of standard sizes and shapes pertaining to both primary and secondary batteries.  These specifications can be classified by consumer sizes commonly available for general purpose applications, and non-consumer sizes for specialized uses such as photography and instrumentation.  Batteries manufactured for specialty use come in a variety of shapes and sizes.

Round batteries are taller than their diameter and have terminals on each end.  Depending on the active materials used, they typically produce between 1.2 and 3 volts when fresh.  Round batteries are commonly available in a variety of sizes, including AAA, AA, C and D.

9-Volt or PP3 batteries consist of six individual 1.5 V cells within a can.  They are typically used in smoke detectors, alarms, and other consumer products. 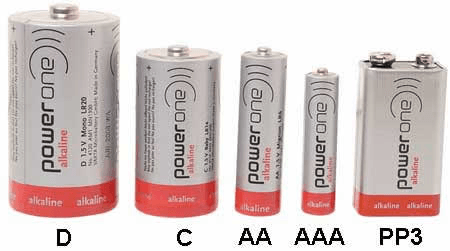 AAAA batteries are used in small devices such as laser pointers, penlights and glucose meters.

A batteries are approximately the same length as the AA size, but with a larger diameter.  They are commonly used in older laptop batteries and consumer battery packs.

N batteries are roughly three-fifths the length of an AA battery.  Similarly to AAAA batteries, they are used in small device applications. 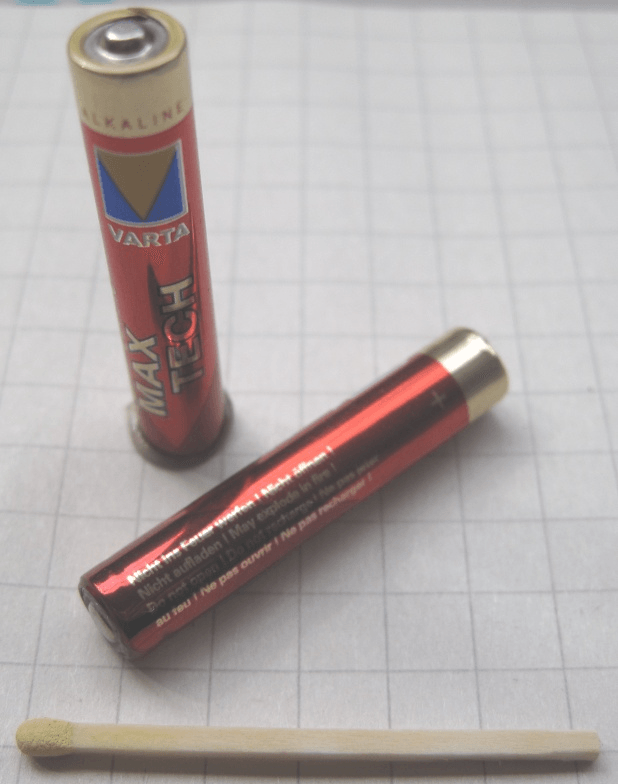 Battery packs consist of primary or secondary batteries bundled together with a connector for use in phones, radio-controlled vehicles and other consumer devices.

Coin or button cells are available in numerous sizes and are used in watches, calculators and hearing aids.

Prismatic cells are rectangular batteries which have slightly lower energy densities than traditional cylindrical cells.  Although prismatic cells are expensive to manufacture, their unique construction offers a more efficient use of space, especially in designing battery packs.

Sachet cells are a relatively recent battery development designed to fit in a specific space.  Their electrodes are surrounded by a flexible foil packaging which replaces the hard case of traditional batteries, making sachet cells lighter.

Thin film batteries are very thin devices which can be integrated into circuits or plastic cards.

Battery voltage refers to the electric potential difference between the positive and negative terminal.  Manufacturers typically specify the battery's nominal voltage, although its actual discharge voltage can vary depending on the battery's charge and current.  For example, a battery cell with a nominal voltage of 2 V actually discharges between 1.7 and 2.0 V at a given time.  Most round consumer batteries carry a nominal voltage of 1.5 V, while a car battery is typically 12 volts.  Depending on the battery materials and application, voltage can range from a fraction of a volt to several kilovolts.

The amount of charge a battery can store is known as its capacity.  Charge is typically measured in amp-hours or milliamp-hours (Ah or mAh).  Most manufacturers specify capacity as the constant current that a new battery can supply for 20 hours.  For example, a battery rated at 200 Ah can supply 10 A over a 20 hour period at room temperature.  If the current supply to the same battery is increased, the capacity will then decrease.