Lenses, control panels, and ingress protection are additional factors to consider when selecting navigation lights. The lens and body should protect the lamp, electronics, and electrical power components from rain, snow, seawater, and dust damage as well as from severe temperatures. Lenses should allow the navigation light to be viewed throughout the required angle. A proper navigation lighting control panel should be selected to maintain control and monitor a craft’s nav lights. In the event of a light failure or open circuit, the controller should trigger an audible or visible alarm to notify the crew. The navigation lighting system should also have a back-up or reserve power supply to keep the craft visible in the event of a main power supply system failure.

The bodies or housings of navigational lights are typically manufactured from corrosion resistant materials such as aluminum, brass, bronze or copper alloys, stainless steels, and composites or plastics. The lenses are manufactured from glass or transparent plastics. The materials of construction and seals between components should be able to resist climate and environmental contaminants.

Nautical navigation lights: In U.S. waters, navigation lighting requirements for boats and marine vessels are prescribed by the U.S. Coast Guard in their Navigation Rules Part C – Lights and Shapes (Rules 20 to 31) or USCG Nav Rules PDF. As a military branch, the U.S. Coast Guard is part of the U.S. Department of Homeland Security. Other countries will have specific navigation light rules, which apply when a vessel enters foreign territorial waters. In addition, international rules apply in international waters. The rules define required colors, shapes, and location of the navigation lights dependent on the vessel length and type (e.g., sail, power boat, large ship, fishing vessel, barge). The pattern of lights visible to a mariner can tell the mariner the orientation and direction of the observed vessel, which allows the mariner to make course corrections to avoid collision, when necessary. 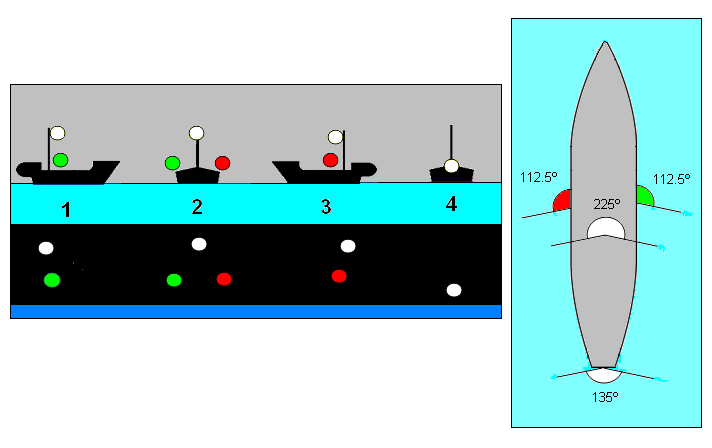 The rules for large vessels and specialized commercial marine vessels can require navigation lights with more complex configurations with visibility extended to several miles (e.g., Positioning of Lights Vessels 50M in Length and Above). Dredging vessels, piloting vessels, fishing vessels, trawling vessels, submarines, diving support vessels, towed vessels, towing vessels, seaplanes, and vessels restricted in their ability to maneuver all have different navigation lighting configuration requirements. A vessel “restricted in her ability to maneuver” is a vessel (often a work boat or ship) where the ability to deviate from her course is restricted due the nature of the work, such as laying, servicing, or picking up a navigational mark, submarine cable, or pipeline; dredging, surveying, or underwater operations; transferring persons, provisions, or cargo while underway; launching or recovery of aircraft; mine clearance operations; and towing. Very high tonnage and large ships may have limited maneuverability and should be given a wide berth by smaller boats.

Towing lights that magnetically attach to a steel hull are often used when a vessel or barge is towed. Towing lights are typically yellow, and dredges must also mark the dredge line with lights. Fishing craft may use drift lights to mark the positions of fish gillnet and lobster traps. Moored and towed barges present a serious danger because these unpiloted vessels cannot change position on their own and personnel are not on board to radio an oncoming vessel or blast a warning horn signal. The U.S. Coast Guard released a safety alert on barge fleet lighting because, “Within the U.S. Coast Guard Eighth District alone, marine  casualty  data  indicates  that  over  the  past  12  years,  44  recreational  vessels  have  struck  (allided)  moored  barges within barge fleets, resulting in 26 fatalities and 44 injuries.” Unmanned barges should have, “an unobstructed white light of sufficient intensity to be visible for at least 1 nautical mile.” Blue and red flashing lights are restricted for use on police and rescue watercraft. Amber lights are used in some specialized marine craft applications. The distance a light should be visible to an onlooking mariner is described in Rule 22 Visibility of Lights (see below). On larger marine craft, the masthead light should be visible to a mariner six miles away from the vessel. A masthead light for a larger vessel is a white light placed over the fore and aft centerline of the vessel, which shows an unbroken light from clear ahead to 22.5° abaft the beam on either side of the vessel.

In addition to navigation lights, boats and ships also have several illumination lighting systems and hundreds or thousands of on deck and below deck light fixtures. None of these are navigational lights.

Aircraft navigation lights: Aircraft have many different types of lights used during the operation of the craft. 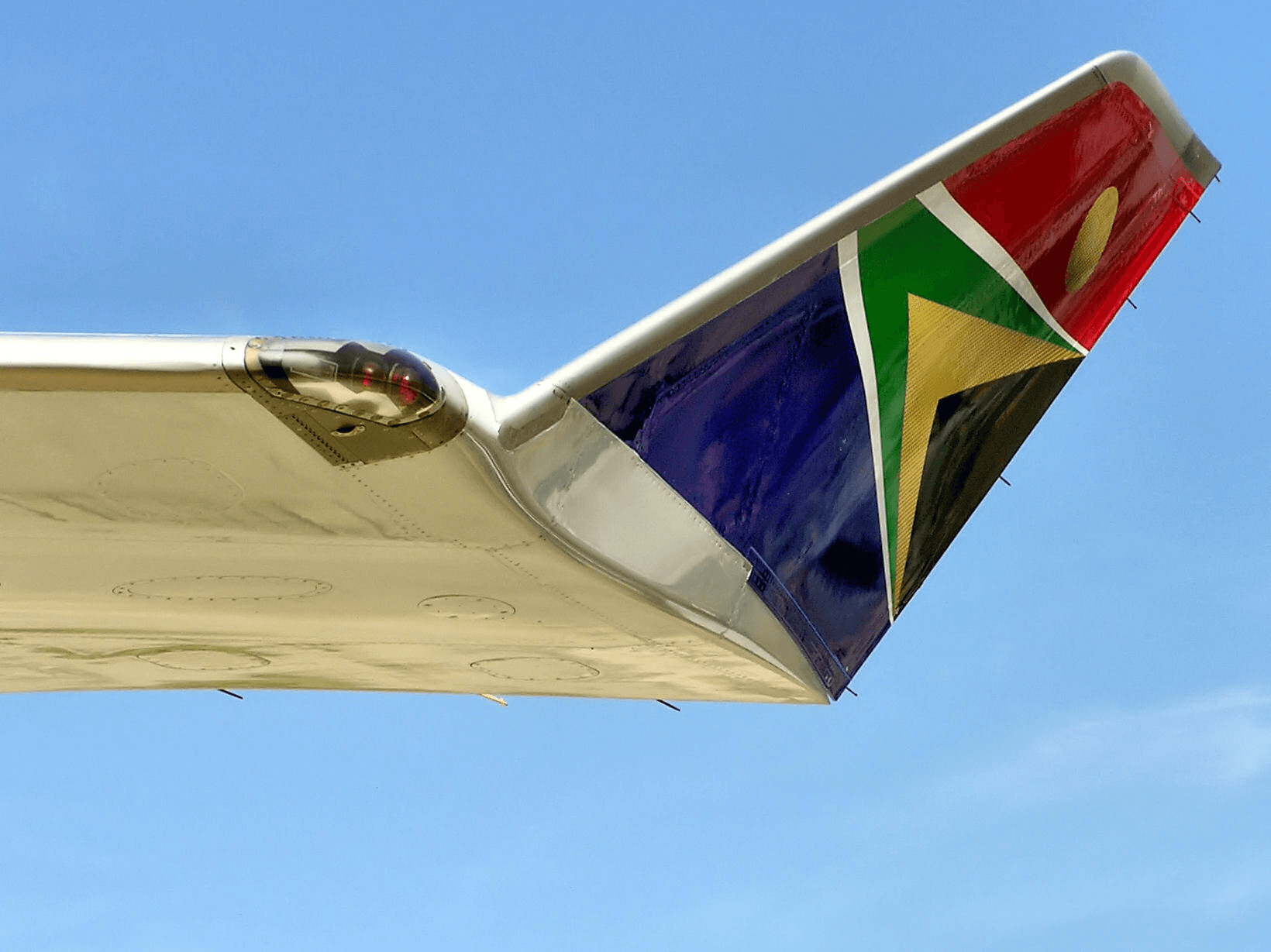 UAVs, drones, RC model aircraft: According to FAA regulations, the “appropriate anti-collision lighting” is required on UAVs. UAVs should be operated during daylight hours and civil twilight hours (30 minutes before dawn, 30 minutes after dusk).  Additional recommendations on drone navigation or running lights are available from various trade or professional organizations such as Air Medical Operators Association, AirTractor, Professional Helicopter Pilots Association, and CropLife America. Small UAVS, drones, or model radio controlled aircraft can be very small and hard to see. The hovering ability of some of the craft can further impair detection. Many organizations recommend strobe or flashing LED lights or a lighting system intense enough to enhance a UAV’s visibility to other UAV operators as well as to larger commercial aircraft during daylight conditions. According to the FAA regulation, “Operation and Certification of Small Unmanned Aircraft Systems," the FAA currently has no data indicating what color(s), if any, would enhance the conspicuity of small unmanned aircraft.  Unlike boats, ships, or large aircraft, many of the UAVs, such as quadcopters, do not have a bow (front) or stern (back) and they can move in any direction. The craft are so small and “there is not a clearly defined relative position on the aircraft, so navigation lights would not be practical."

Bicycle lighting: Bicycles are usually fitted with lights and/or reflectors to increase their visibility to motor vehicles and other bicyclists. A front white or yellow light and a rear red light or reflectors are common requirements or regulations in many locations. Country or state authorities usually define the specific regulations.

Amalgamation of the International (72 COLREGS) and Inland Navigation Rules