Chip antennas are a particular type of antenna valued for their small footprint. They are most commonly integrated in circuit boards to radiate high frequency electromagnetic waves. They have a limited range, making them optimal for small devices such as cell phones and WiFi routers.

Chip antennas radiate and receive electromagnetic waves as do regular antenna, but their most notable difference is their small size. This means they can often be internalized within small electronic devices; they are also inexpensive considering their quality. Chip antennas are the best alternative when a larger-sized antenna is impractical. 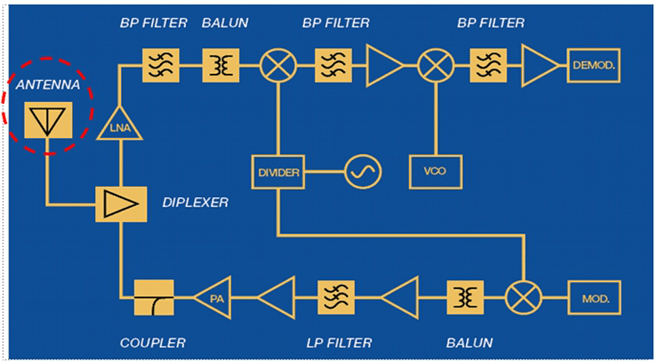 One means of creating an antenna which can be integrated into a PCB would be the use of fractal geometry. A fractal is a complex pattern constructed from the repitition of a simple shape which maximizes the length or increases the perimeter of the material thats radiates an electromagnetic signal. These antennas must be in proportion to the signal wavelength, and the fractal must retain at least two different ratios of the pattern. These antennas can be customized into a variety of footprints and are becoming increasingly common in mobile electronics. Overall, the gain and bandwidth of fractal antennas is exceptional. Fractal antenna designs do not require any additional components to work, which further enables their flexibility.

Since antenna geometry is related to the frequency of the signal, manufacturers must design an antenna that is inversely proportional to the wavelength. To efficiently broadcast and receive a signal, the antenna length should be no smaller than λ/10, where λ is the wavelength; other ratios such as λ/4 are common. An antenna must be rather small to be incorporated in a printed circuit board, and therefore high frequency chip antennas are most common. Chip antennas are most commonly manufactured for frequencies between 300 MHz and 2500 MHz, and this accounts for their limited range as well (usually just a few hundred feet or less). Chip antennas are also very precise in their frequency tuning, resulting in a narrow bandwidth which also assists in the antenna's efficiency. The gain of chip antennas is relatively high, provided the Voltage Standing Wave Ratio is kept to a minimum. VSWR is a measurement of how much energy is reflected back to the power source due to impedance mismatching of the circuit (feedline, microstripline, capacitor, inductor, antenna), and this value is most commonly established as 50Ω.

Polarization is parallel to the long axis of the chip antenna, so frequencies are radiated perpendicularly to this axis. As such, noticeable null zones are found at the furthest ends of the antenna. This can be relieved by implementing two antennas with long axes that are perpendicular or at 45°, or by positioning the antenna in vertical fashion within a device. The orientation of the electromagnetic waves are usually linear or circular in orientation.

Most manufacturers will provide peak gain, bandwidth, return loss, and the radiation pattern for an antenna, but all these values are stated for a precise ground plane and predetermined application. For these reasons, chip antennas can become detuned from hand effects, ground plane geometry, the wrong thickness and dielectric of the PCB, and the distance from the ground.

The following aspects of chip antenna use will greatly alter the efficiency of the antenna.

How components on the PCB are spaced and oriented greatly affects the efficiency of a chip antenna.

Chip antennas are ground plane dependent, meaning they require an appropriately-sized and positioned ground plane to form a complete resonant circuit. A ground plane of 3-4 cm long and 1-2 cm wide will create a dipole, but if the plane is large enough than it will act as a monopole antenna. While the PCB can act as the ground plane, the antenna itself is required to be placed on the edge of the PBC on top of an isolated section which is free from ground and metal components that would distort its radiation. The microstrip line should be in proportion to the ground plane as well. Furthermore, the feedline should be minimal in length and perpendicular to the microstripline, lest it becomes a parasitic part of the resonance system. Vias, which are through holes placed strategically in the PCB, minimize the electric field generated at the PCB edge.

To be truly omnidirectional, a PCB with a single chip antenna needs to be mounted within the device in a vertical orientation. This puts the null zones immediately overhead and below the antenna, thereby propagating waves in other directions. 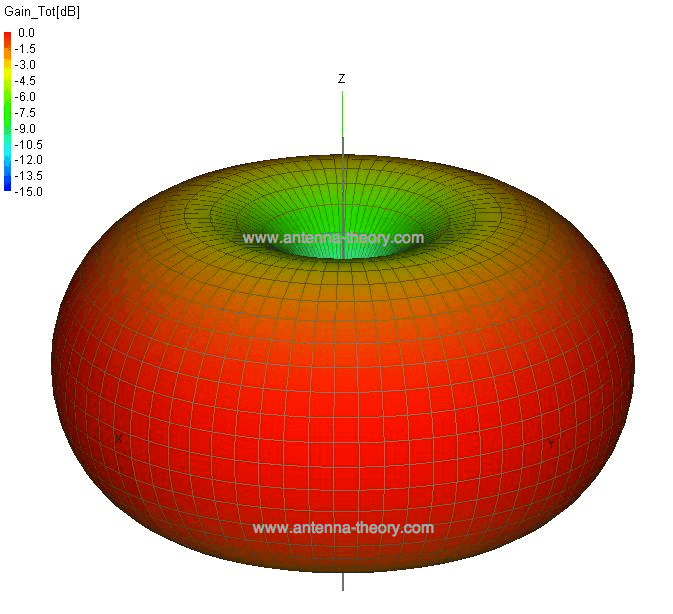 By matching the impedance of the materials which transmit the charge and resulting electromagnetic wave (radio, feedline, antenna), a minimal amount of energy is reflected back to the source, resulting in optimal charge to transmission efficiency. The amount of energy that a receiving antenna harnesses, once all losses and sources of impedance are accounted for, is known as the antenna aperture.

Since chip antennas are common in handheld electronics they are often incorporated into polymer or rubberized enclosures meant to protect the PCB from harsh environmental factors, such as shock, vibration, moisture, dust, or chemicals. Metal components are in these radomes and casings should be minimized. These cases and enclosures may affect the chip's radiation pattern and should be thoroughly evaluated. In limit instances, chip antennas may be used in a panel array in increase directionality, in which case the antenna is similarly protected and possibly restricted.

Chip antennas commonly radiate in the following bands depending upon the application.

Chip antennas must comply with electronics standards published by the Institute of Electrical and Electronics Engineers (IEEE). IEEE 802.11 is a widely accepted wireless networking standard.