Antennas are mechanical components which either transmit or receive radio frequency signals. For transmission, an oscillating RF electrical current is fed to the antenna's terminals, where the conduit radiates the signal as electromagnetic waves. For reception, an antenna captures some of the original signal to produce a voltage upon its terminals which is then amplified. Antennas are used in every instance of RF communication, including radio and TV broadcasts, handheld transceivers, cell phones, radar systems, satellite communications, Wi-Fi networks, and remote controls.

Radio frequencies transmit audio, video, or data via electromagnetic waves produced by a variable voltage or alternating current applied to an antenna. Atoms excited by this charge have one or more weakly-held electrons in their outer shells and these can transition from atom to atom. The slight motion of electrons along the antenna is enough to cause electromagnetic waves to pulse at the same frequency as the charge applied to the antenna. The rate of oscillation is known as frequency and is measured in hertz, and RF is transmitted between 3Hz to 300THz.

In order to encode information within the wave, an operator needs to modulate the wave accordingly.

Other methods of modulation exist, especially in digital communication applications, but they are based on the aforementioned methods.

An antenna is also utilized to receive electromagnetic waves, but in this case to divine the signal from the environment. The antenna's metal construction conducts enough RF waves that a tuner must be able to isolate the signal indicated by the operator. Just as the excited electrons transmit oscillating electromagnetic waves, electrons in the reception antenna receive them. The number designations provided by a tuner is representative of the hertz of the RF signal. Tuners demodulate the signal by interpreting the amplitude, frequency, or phase of the wave. A transistor amplifies the signal for auditory, visual, or data output.

There are essentially two types of antenna constructions: omnidirectional and directional. Omnidirectional antennas radiate RF uniformly in all directions, with the power decreasing at elevations above or below the plane to reduce power waste and increase transmission distance. Directional antennas are designed to propagate radio waves in a specific direction with a high concentration of focus. These are excellent for direct communication between two points. In reality, no antenna is completely directional or omnidirectional, but such terminology distinguishes how the signal is applied. 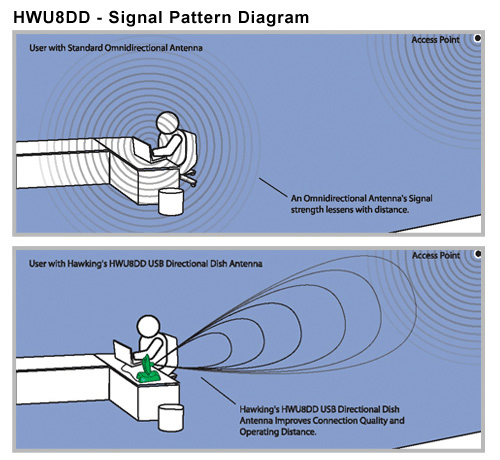 Antenna configurations to increase directionality include:

Other types of antennas can be adjusted to transmit directionally:

Omnidirectional antennas feature no design alterations to affect the direction of a signal.

Furthermore, it becomes possible to adjust the directional capabilities of an array by making the array a broadside array or end-fire array. In broadfire arrays, all antenna elements are placed parallel to each other along an axis, and radiation is maximized along the direction in which the elements point. End-fire arrays require the elements to share an axis as well, but RF radiation is maximized along the axis direction instead. 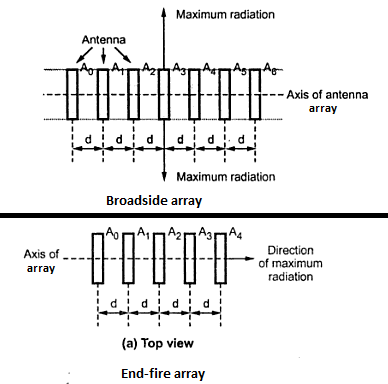 The term gain can be somewhat misleading, because an antenna is a passive component and it does not amplify anything. Gain is the ratio of the maximum power density of a directional antenna at a specific distance, in contrast to the power density of omnidirectional antenna (assumed to be operating at 100% efficiency, though it is impossible) when both antennas are supplied identical charge. An omnidirectional antenna with equal radiation in every direction has 0 decibels (dB). The decibel is a unit of measurement which quantifies power or intensity in relation to a known reference. In this instance, it is the quantity of RF produced by the antenna.

Explore Gate's Yuval Tsur explains the differences between far fields, near fields, and Frennel zones and how electromagnetic waves behave in each classification.

Efficiency is a measure of how well the antenna converts a supplied charge into radiated power. Due to the physical limitations of antennas, it is virtually impossible to achieve 100% efficiency. Voltage standing wave ratio (VSWR), the amount of power that is transmitted but then reflected back to the source, is due to impedance mismatching between conduits. There are other sources of inefficiency:

The efficiency of an antenna is frequently presented as a percent or in decibels. By matching the impedance of the materials which transmit the charge and resulting electromagnetic wave (radio, feedline, antenna), a minimal amount of energy is reflected back to the source, resulting in optimal charge to transmission efficiency. The amount of energy that a receiving antenna harnesses, once all losses and sources of impedance are accounted for, is known as the antenna aperture.

Bandwidth is the range over which the antenna can transmit/receive radio. Broadcasts are entitled to a range of specific frequencies and the difference between the high and low is the bandwidth. An antenna transmitting between 20MHz and 40 MHz would have a bandwidth of 20 MHz. Manufacturers also supply an antenna's VSWR so users can determine any operating loses.

The direction of the electrical part of the electromagnetic wave determines the wave's orientation. When antennas are mismatched, at least some of the signal is lost in what is called polarization loss. Therefore, a transmission is best-served by emitting and receiving antennas which have the same polarization. Polarizations include:

Manufacturers typically supply this information as a three- or two-dimensional graph. Power emitted by an omnidirectional antenna with 100 percent efficiency would be presented as a torus in a three-dimensional graph, and a circle on a two-dimensional graph. However, radio waves from the same antenna can interfere with each other and create amalgamated waves which are out of phase, effectively eliminating reception at some angles with respect to the antenna. Directional antennas are designed to have exceptional range in one direction, and when represented in a graphical format the 'lobes' (i.e. coverage) of an area becomes clear. 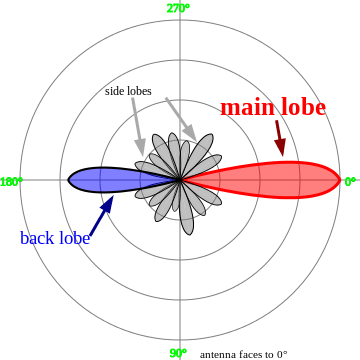 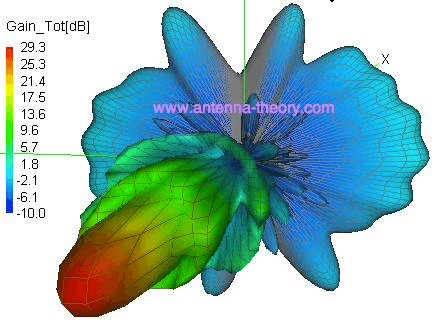 These features may prove important when selecting antennas.

A radome or dielectric coating provides circuit protection to sensitive antenna components. Though additional impedance is encountered by the signal, it can usually be overcome with design changes. Such measures ensure antenna up-time in poor weather and harsh environments. Panel and chip antennas frequently utilize some type of protective housing.

Antennas used for the propagation of radio waves are exceptionally common and nearly innumerable. Every modern vehicle -- automobiles, trains, boats and ships, aircraft, spacecraft-- relies on an antenna for either communications or entertainment. Militaries require more robust antenna designs which operate within a specified range of the electromagnetic wave spectrum. Cell phones and the networks in which they operate require a series of antennas for operation, and cell phone companies pay governments a licensing fee to broadcast data as RF. GPS relays RF between extraterrestrial satellites and handheld GPS units. WiFi, radar, Bluetooth, and RFID tags all utilize antennas. One of the most radical developments in antenna applications is wireless electricity, where antennas transmit RF at a high enough efficiency to supply an operating charge to the device. Though this technology has been around since 1891, it has yet to catch on.

Depending upon the antenna's end-use application, the following standards may be useful in considering antenna designs.

Intuitor - The Physics of Resonance: How Antennas Work