An IC PCI bridge is an electronic device or chip that connects a device with a particular PCI protocol to another PCI type, or to another device with a different protocol. It can also be used as a hub to expand the number of PCI slots available in a PCI system.

There is a PCI bus common to all PCI-based peripherals connected to the bus. Data from each device transmits at 32 bits per second for standard PCI. In order for the host (CPU) to receive data from only one of the connected devices, the PCI protocol contain features that allows the bus to decide which peripheral gains access to the host. For a standard PCI system, no more than five devices can be connected in order to minimize interference. 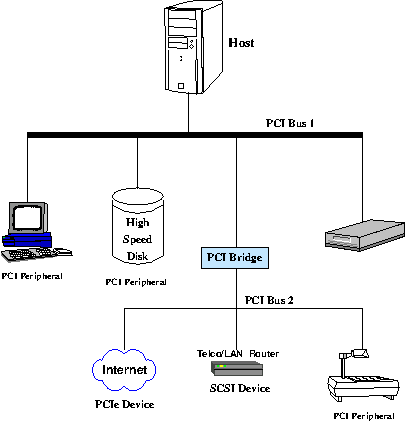 Example system with a PCI bridge connected to the main bus and managing a secondary bus with connected devices.

The standard, basic PCI protocol transfers data at a rate of 32 bits per second, at a maximum clock speed of 33 MHz, so the bandwidth is 132 megabytes per second.

The protocol enables the replacement of system devices without needing to turn off the system. This reduces the mean time to repair (MTTR), an important factor in comptemporary computer networks.

PCI is a "smart" protocol. If a new devices are added to the system then the PCI protocol configures the new layout automatically, without human intervention.

There are several modalities of PCI protocol. Some of the most important are as follows.

This is the standard protocol with a typical speed of 32 bps and maximum bandwidth of 132 MB/s, as defined earlier.

A PCI variety that is operates at a speed of 64 bps and clock speeds of 66 MHz and 133 MHz. This combination produces bandwidths of 528 MB/s and 1064 MB/s respectively.