The sensor head of these devices essentially consists of a coil of wire wrapped around a magnet. As gear teeth (or other target features) pass by the face of the magnet, they cause a time-varying magnetic flux that induces a proportional voltage in the coil. Electronics massage this signal to get a digital waveform that can be counted and timed. This image illustrates the sensor and toothed target. 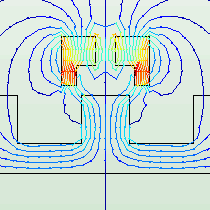 VR sensors are a type of inductive sensor, meaning they can detect the presence of metal objects without touching them. These sensors are also deemed passible sensors because they require no power supply.

VR sensors have a number of important specifications used to describe performance.

Features for VR sensors may be important to consider based on the application.

Because the magnitude of the signal developed by the VR sensor is proportional to target speed, Hall Effect sensors are many times the better choice. Although VR sensors have low cost transducers, additional circuitry may be required to accommodate the very-low-speed signals. However, these sensors excel in high-temperature applications. VR sensors can be made to operate at temperatures in excess of 300°C. They are used in automotive engines, aircraft turbines, oil pumping equipment, ships at sea, and industrial applications utilizing conveyor belts.

Hearst Electronic Products - Hall vs. VR: Which speed sensor is wrong for you?