Optical triangulation position sensors use reflected waves to pinpoint position and displacement. They are noncontact height or range measurement devices.

These sensors use an optical transmitter to project light on the target. The reflection of that light is focused via an optical lens on a light sensitive receiver. The distance is calculated from a reference point by determining where the reflected light falls on a detector. If the target changes position, the reflected light changes as well. Conditioning electronics provide an output signal proportional to target position.

Resolution is defined as the smallest amount of distance change that can be reliably measured. When properly designed, laser triangulation sensors offer extremely high resolution and stability. Optical triangulation sensors have the ability to detect small motions and have been successfully used in many demanding, high-precision measurement applications. Resolution can be determined by looking at the system's electrical noise. If the distance between the sensor and target is constant, the output will still fluctuate slightly due to the white noise of the system. Most resolution values are presented based on the peak-to-peak value of noise and can be represented by the following formula: 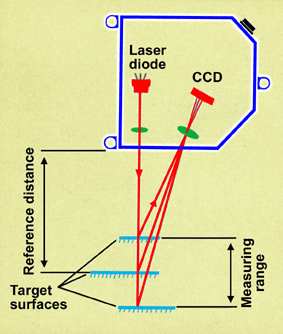 Most optical triangulation position sensors house the sensor itself with the emitter. The sensor detects the beam that is reflected from the surface or object and provides an output that varies with the distance.

Triangulation sensors are either diffuse or specular depending on the reflectance characteristics of the materials.

Diffuse are irregular, which results in scattered reflections. They are used for surfaces that scatter light easier.

Specular are mirror-like and produce a predictable reflection. They are used for smooth or shiny surfaces.

Source—The source or transmitter, projects a beam that illuminates the target object. The light source should be relatively high intensity and should create a small spot on the surface.

Receiver—The receiver gathers the light reflected off the target and projects the light onto a detector, which reports the spot position to the processor to determine the range or height. There are two common optical detectors for triangulation sensors:

Photodiode (PSD) - PSD triangulation is a long-standing technology. They are analog detectors that use single dimension detectors with electrical current output at each end. The spot's position is proportional to the amount of current from each output. They are fast and efficient but reliability can be compromised by light intensity or color, surface conditions, target texture, or tilt change. PSD is ideal for pass-fail applications.

Diode arrays- An array photosensing diode is a digital detector, which can also be arranged to receive the reflected laser light from the object. They allow the user to view the intensity distribution of the imaged spot and understand the nature of the material or part being examined. They require more post-processing and are slower and larger than PSDs. 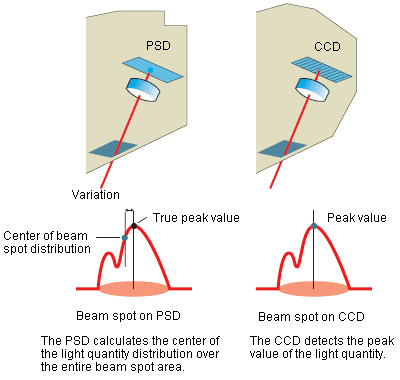 Sampling rate is important, as this specification may determine the suitability of optical triangulation position sensors for specific applications.

Beam patterns are designated as

Working range is either more or less the reference distance and usually given as a value.

Reference or standoff distance is the mid-point in the working range.

Optical triangulation position sensors may use either visible or invisible light beams. Sometimes, a visible beam can make the sensors easy to mount and aim at a target. Occasionally, a visible beam can be undesirable. For instance, in a factory or processing center where personnel are working, a visible beam may be distracting and potentially lead to accidents.

Resolution is the smallest unit of distinction that optical triangulation position sensors can detect.

Accuracy indicates how close the device's measurements are to actual values. It is a percentage of full scale.