Capacitive linear position sensors measure position, displacement, vibration, and run out (thickness), primarily in a noncontact manner. They have good accuracy and very high resolution, but may be sensitive to environmental factors.

Noncontact capacitive sensors measure changes in capacitance. Capacitance describes how two objects with a space between them respond to a voltage difference applied to them. This video illustrates: 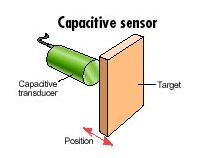 For nonconductive targets, a stationary target plate may be used. When the nonconductor is placed between the probe and the target, the thickness, density, and/or position of the material changes the dielectric constant of the interval space.

In cases of nonconductive sensing without a reference, the sensing electric field wraps back to the probe, creating a "fringe field." When a nonconductive material nears the probe, its ectric changes the field.