RF inductors are special inductors designed to be used in radio frequency (RF) and microwave applications.

RF inductors are inductors designed to handle radio frequency signals, which are much higher in frequency than alternating or direct (AC or DC) current. Along with capacitors and resistors, inductors make up a large majority of the components found in resonant (tunable) circuits essential to radio communication devices.

The image below shows an inductor/capacitor pair in a parallel tuned circuit. If the capacitor and inductor are properly matched, this circuit will pass only signals of a specified frequency and cancel out all others. This capability is especially useful in radio communications for cancelling all signals except a desired frequency.

Typical inductors used for lower-frequency operations are constructed as wire coils wrapped around a ferromagnetic core. All inductors using magnetic cores, however, are subject to undesirable current loss dissipated as heat or noise. Core losses can be caused by two conditions:

Because core losses increase as a current's frequency increases, ferromagnetic cores are not used in RF inductors. Instead, these inductors use air cores, which have lower inductance but much higher resistance to losses. This term may refer to actual air (to the effect that the coil seems to be wrapped around an "empty" core) as well as nonferromagnetic materials such as glass or polymers.

While air cores cut high-frequency signal losses, their higher resistance values lead to unique losses which can reduce a circuit's Q factor. The Q factor describes a tunable circuit's resonance by relating its bandwidth to its center frequency; higher Q values indicate lower losses in relation to higher stored energy. Q factor losses in air core inductors are caused by the factors below.

To reduce these conditions, RF inductors are typically designed with coils spaced further apart than low-frequency inductors. They may also feature tubular wire or metal strip to increase surface area. The methods listed below are common means for abating air core losses.

In addition to the multilayer designs above, RF inductors may be manufactured as single-layer coils. These have two distinct advantages: they are effective against hysteresis and eddy current losses, and have low self-capacitance and high self-resonance, making them effective for frequencies above 3 MHz.

A single-coil inductor. Note that the coils are well-spaced and are composed of flat metal strip to decrease signal loss.

The inductance of a low-frequency single coil can be calculated using the formula below. Because RF inductors are typically high-frequency devices, 2% of the inductance value must be subtracted for devices designed for frequencies high enough to experience skin effect.

Optimum inductance is typically achieved when the length of the coil (l) is the same as its diameter (or twice its radius, 2r).

Most of the important RF inductor specifications are discussed above and are specified by a manufacturer. Inductance is the most important and is specified in henries, millihenries, or nanohenries (H, mH, or nH). Suppliers may also specify an inductance tolerance value which describes the allowable variation from the specified inductance.

Self-resonant frequency (SRF) is the frequency at which an inductor's distributed capacitance resonates with its inductance. At SRF, inductance reaches its minimum value while impedance spikes and then decreases with increasing frequency, causing the inductor to function as a purely resistive component with a Q value of zero. At frequencies below SRF, the device operates as an inductor, while above this frequency it behaves more like a capacitor. In the context of this discussion, then, inductors intended for high-frequency applications must have relatively high self-resonant frequencies to function as designed. 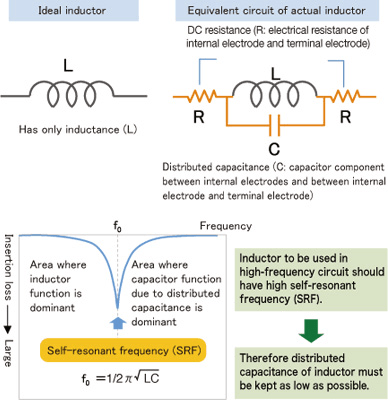 The design and use of RF inductors often adheres to specifications described in published standards, some of which are listed below.