When a capacitor is connected to a voltage source such as a battery, current will flow from the battery's negative terminal to the plate closest to this terminal, which becomes the negatively-charged plate. Electrons on the other plate simultaneously move toward the battery's positive terminal due to Coulomb's Law; this plate therefore becomes the positive one. When the negative plate becomes saturated with electrons, the capacitor is said to be fully charged, and an electric field is developed across the plates.

Two related formulas can be used to calculate the quantity of charge on the plates or the device's maximum capacitance.

Capacitance is calculated as:

By rearranging this formula, we can also find the charge if the applied voltage and capacitance values are known:

Capacitance can also be calculated in relation to a capacitor's geometry:

This equation proves that capacitance is independent of the applied voltage and charge, and is only a function of the device's geometry and dielectric material.

Capacitance is measured in farads, which are extremely large units. Most capacitors are rated using smaller units, such as micro- or picofarads.

Capacitors are versatile components used in a number of general and specialized applications. The table below illustrates the versatility of capacitors and the wide range of applications they are suited to.

Variable capacitors can be adjusted by the user, using either mechanical or electronic means. These are also known as tuning capacitors due to their common applications in radio and antenna tuning. Mechanical variable capacitors are constructed with two sets of overlapping metal plates: a stationary set (stator) and a rotating set controlled by a shaft (rotor). Turning the knob changes the distance between plate sets, thus adjusting the device's capacitance according to the formula above.

Another type of mechanical variable capacitor, known as a trimmer capacitor, uses a mica dielectric between two plates and is adjusted using a screw.

Variable capacitors may also be produced in chip form, in which case they are digitally tuned.

Capacitors may be manufactured to comply with various standards, including:

The Restriction of Hazardous Substances Directive, or RoHS, is legislation adopted by the European Union in 2003. Although RoHS products are commonly known as "lead-free", the directive also restricts the use of mercury, cadmium, hexavalent chromium, polybrominated biphenyls, and polybrominated diphenyl ether in electrical and electronic products. The RoHS directive is designed to reduce medical hazards in third-world countries inundated with "high-tech trash." While there is no standard RoHS mark, the one to the right is typical.

Capacitors are primarily manufactured as through hole (THT) or surface mount (SMT) devices.

Through hole components have long leads which are passed through holes on a printed circuit board (PCB) and soldered onto the opposite side. While THT mounting ensures a very strong mechanical connection, through hole products must be relatively large by necessity. THT has largely been replaced by surface mount technology, or SMT.

Through hole capacitors may feature one of several lead arrangements:

Surface mount devices are mounted directly onto a PCB using short leads, flat contacts, BGAs, or other terminations. SMT devices can be manufactured to be much smaller than THT capacitors and are easier and cheaper to assemble due to the lack of necessary drilled holes. 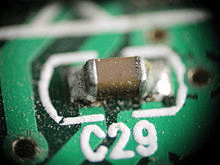