Ceramic capacitors are passive electronic components constructed using a ceramic dielectric. Ceramic materials have been used as insulators since the beginning of the study of electronics. Early ceramic insulators included mica, steatite, and titanium oxide, while modern technical ceramics include barium titanate, silicates, and aluminum oxide.

Ceramic capacitors consist of two electrical conductors separated by a dielectric material, in this case a type of ceramic. They are among the most commonly produced capacitor types. Like other capacitors, ceramic types are used to store potential energy, delay voltage changes, and filter unwanted signals. 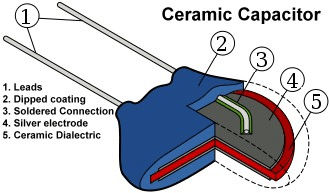 Cross-section of a ceramic disc capacitor. 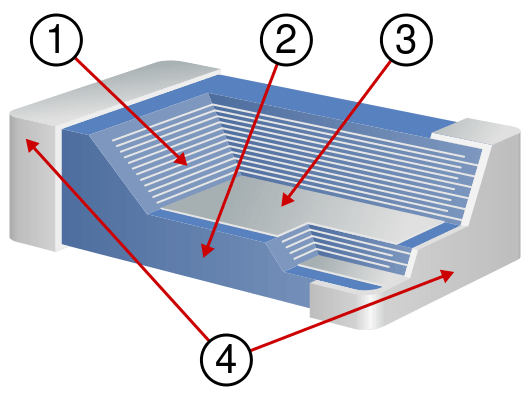 MLCCs are some of the most common capacitors and are extensively used in electronics applications. They can be produced as very small chips and feature excellent temperature stability and frequency characteristics.

Ceramic capacitors can also be classified by their specific type of dielectric. Most ceramic dielectric types can also be labeled with an EIA (Electronic Industries Alliance) class designation as defined in EIA 535. Note that classes do not determine a product's superiority or inferiority, but exist to group capacitors with similar characteristics and applications. The EIA labels capacitors using a three digit code to represent the dielectric's capacitance/temperature slope. More information on using these codes can be found here.

C0G (EIA designation) or NP0 ("Negative-Positive Zero"; industry term) materials are typically comprised of titanates, such as titanium dioxide, and are known as EIA Class 1 dielectrics. They have low dielectric constants and remain stable under variable voltage, temperature, and frequency conditions. Class 1 products are typically used in timing circuits and low-loss applications.

Z5U is a Class 3 dielectric material. They feature better volumetric efficiency than Class 2 products but are susceptible to very wide electrical variations under variable temperature conditions. Class 3 devices have generally been replaced by superior MLCCs and are considered nearly obsolete.

In addition to the EIA standard linked above, some ceramic capacitor standards include: