Resistors are electrical components that oppose the flow of either direct or alternating current. They can be used to protect, operate, or control circuits. In combination with other components, resistors can also be used to make electrical waves into shapes suited to the designer's requirements. Resistors can have a fixed value of resistance, or they may be variable or adjustable within a certain range. As passive components, resistors can only reduce voltage or current signals and cannot increase them.

The resistance of an element measures its opposition to electric flow, expressed in ohms (Ω). Every material has a specific resistivity, which measures the strength of this opposition. For an even cross section of an element, the resistance (R) is proportional to the material's resistivity (ρ) and length (L), and inversely proportional to area (A).

Resistance values can be shown on an element using color bands which follow a standard color code system. Between three and five bands are placed on the resistor for indication. Bands read from left to right (end to center). The first band will be close to filament and will not be isolated; the last band is generally spaced farther apart from the rest. The chart below gives the color code representations: 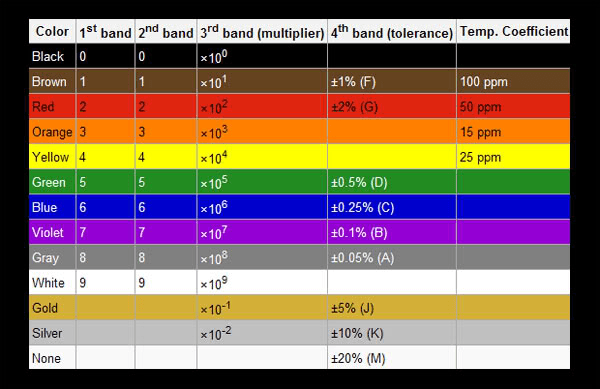 • The first band represents the first digit of resistance.

• The second band represents the second digit of resistance.

• The third band indicates the multiplier.

• The fourth band indicates the tolerance.

Take the resistor below as an example.

The first band (brown) and second band (orange) indicate a number of 13. The third band (red) indicates a multiplier of 102. The fourth band (silver) indicates a ±10% tolerance. Therefore the resistance is:

Five band resistors read the same as four band resistors, except an extra band is inserted between the second and third which indicates a third digit of resistance.

Three bands are placed on some unique or small-value resistors. They read the same as four band resistors except that the absence of a fourth band assumes a tolerance of ±20%.

This video gives a further explanation of resistor color codes and how to read them:

When selecting resistors, industrial buyers should consider the configuration type, performance specifications, and physical parameters such as construction and mounting.

Resistance (R) is the main specification for resistor elements which indicates the single resistance value or range of resistance which the element provides.

Using Ohm's law, the voltage (V) and current (I) of the system can be used to find the required resistance value for the resistor element.

Power rating is the maximum power supported by the resistor. This rating is measured in watts (W) to describe how much heat energy a resistor can dissipate without overheating and sustaining damage. Resistors can be operated at any combination of voltage and current as long as the power rating is not exceeded, and provided that neither the current rating nor the voltage rating of the element is exceeded.

Using Joule's law, the voltage (V) and current (I) of the system can also be used to find the power in the system.

By substituting Ohm's law in the equation, power can be determined using the resistance and system current.

Physical parameters include the resistor element's construction and mounting options.

Carbon composition resistors consist of powdered carbon, an insulating material, and a resin binder. Their resistance value is determined by the ratio of powdered carbon to insulating material. Carbon-composition resistors usually have a precision of no greater than 5%. This means that a 100-ohm resistor can range from 95 to 105 ohms in actual value.

Carbon film resistors are similar in construction to metal film resistors but generally with wider tolerance (typically ±5%) relatively inexpensive and readily available. They have resistance values within ±10% or ±5% of their marked or nominal value.

Ceramic composition resistors are solid-body devices made of a high-temperature, ceramic resistive material. They have bonded metal contacts. The construction of ceramic-composition resistors concentrates nearly all of the component mass into the resistive element, resulting in a rugged device with high-energy capacity.

Metal film resistors are produced by depositing a resistive element on a high-grade, ceramic rod. The metal film's resistive element may be carbon, nickel chromium, a mixture of metal and glass, or metal and metal oxide. The precise resistance is achieved by removing part of the metal film in a spiral pattern around the rod. Typically, the tolerance is within ±2% or ±1% of the nominal value. When a tolerance of 1% is achieved, a 100-ohm, 1% resistor falls in the range of 99 to 101 ohms.

Common configurations for mounting include through-hole mounts and surface mounts.

Through hole technology (THT) mounts resistors on a printed circuit board (PCB) by inserting the component leads through holes in the board and then soldering the leads in place on the opposite side of the board. It provides stronger mechanical bonds than surface mount techniques, but requires more expensive boards due to the additional drilling required. Surface mount technology (SMT) adds resistors to a printed circuit board (PCB) by soldering component leads or terminals to the top surface of the board. SMT devices (SMD) have a flat surface that is soldered to a flat pad on the face of the PCB. Typically, the PCB pad is coated with a paste-like formulation of solder and flux. SMT resistors normally have very low power dissipation. Their main advantage is that very high component density

can be achieved on the board.

All About Circuits - Resistors