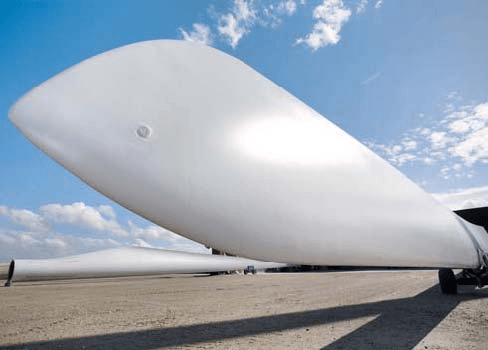 Wind turbine blades are airfoil-shaped blades that harness wind energy and drive the rotor of a wind turbine. The airfoil-shaped-design (which provides lift in a fixed wing aircraft) is used to allow the blades to exert lift perpendicular to wind direction. This force vector acts on the rotor and is the driving force of the wind turbine.

Wind turbine blades are considered to be the most critical piece of a wind turbine. They are subject to enormous stresses and are manufactured to tight tolerances. They must be balanced and held to these tight tolerances in order to minimize any amount of vibration that would otherwise destroy the wind turbine.

The aerodynamics of wind turbine blades are optimized in a thin blade design, while the structural integrity of an oblique airfoil design increases the life expectancy and survival speed. These two extremes are carefully balanced as to optimize the efficiency of the turbine while increasing its life expectancy.

Modern wind turbine blades have a twist along the length of the blade. The airfoil's optimal angle of attack is affected by the apparent wind direction. The apparent wind direction changes as the speed of blade increases, even when a uniform wind velocity exists across the rotor swept area. As the tip of the blade travels much faster than segments of the blade closer to the hub of the rotor, the blades have incorporated a twist as to achieve an optimal angle of attack along the full length of the turbine blade. Straight blades are those that do not have a twist and are cheaper to manufacture. 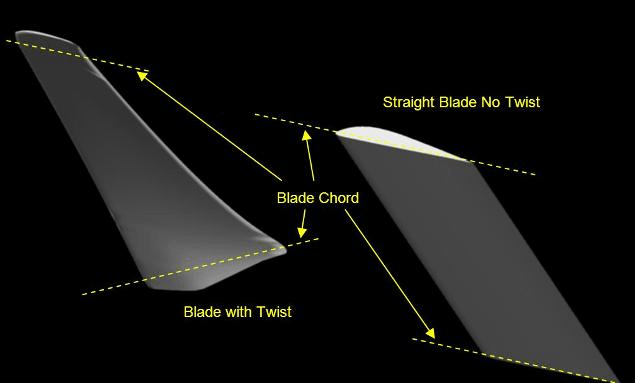 The tip speed ratio of a wind turbine blade is the ratio of the speed of the tip of the blade to that of the wind. TSR is a vital design criterion for all lift-type wind turbines. As the blades of a wind turbine rotate they interact with the wind. If the rotation of the rotor is too slow, wind passes through the rotor swept area without interacting with the turbine blades. If the rotation is too fast then the rotor swept area acts as a barrier and deflects the wind, causing turbulence and loss of wind power. The optimal TSR for horizontal-axis, three blade turbines, which are predominantly used in onshore and offshore wind farms, is approximately 5:1 to 6:1. 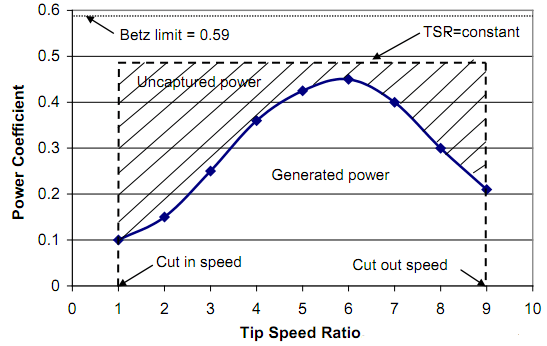 To calculate the TSR for a VAWT you need to record the rotational speed of the rotor (ω), the radius of the rotor, and the wind speed. With these three values the TSR can be calculated with the following formula.

Radius of the Rotor (meters)

As it may not be practical to record the rotational speed, a tachometer can be used to record the time period (t) for one full rotation of the rotor. The distance traveled is equal to the circumference of the rotor-swept area as tip of the blades travel 2ΠR meters every full rotation. The blade tip speed is then 2ΠR/t and this can be divided by the wind speed from a digital anemometer to give a field measurement of the tip-speed ratio.

Another method used to increase the efficiency of a wind turbine is the use of a variable pitch control system. The variable pitch control system is used to adjust the pitch of the turbine blades so that the power co-efficient (Cp) equals the maximum attainable power co-efficient (CP max) for a range of wind speeds. Or more simply put, it allows you to control the pitch of the blades so that CP = CP max, by maintaining a constant tip-speed ratio as illustrated by the following graph: 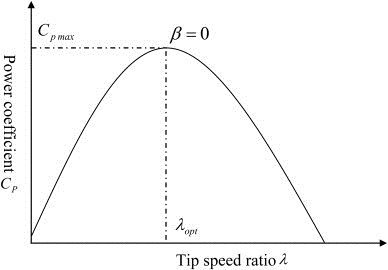 Industrial standards and regulations are critical references used in the design, manufacture, testing, installation, and maintenance of wind turbine blades. Following the guidelines set forth by industrial standards and regulations minimalizes liability, ensures compliance, and collectively lowers the overall cost by eliminating wasted time and effort.

This standard encompasses details regarding the design and manufacture of offshore and onshore wind turbine blades.

This part of IEC 61400 deals with safety philosophy, quality assurance, and engineering integrity and specifies requirements for the safety of small wind turbines (SWTs) including design, installation, maintenance, and operation under specified external conditions. Its purpose is to provide the appropriate level of protection against damage from hazards from these systems during their planned lifetime.

This technical specification provides guidelines for the full-scale structural testing of wind turbine blades and for the interpretation or evaluation of results, as a possible part of a design verification of the integrity of the blade.