Videoscopes (or video borescopes) are advanced borescopes which use image sensors to relay images to an operator.

of capabilities, quality, and operation. While simple borescopes use optical lenses to project an image from the tip (or distal end) to a viewer's eyepiece, videoscopes use an image sensor to send the image to a video screen. Note that this does not mean a videoscope contains no other optics; as seen in the image below, typical videoscopes have an optical lens, an image sensor, and some form of illumination in order to capture an image.

A typical videoscope setup is shown below. Unlike simple borescopes and most fiberscopes, videoscopes require a control unit and readout monitor, which in the image below consists of both an integral control unit/monitor and a separate remote control for convenience. Note that, while a rigid borescope's tube contains a series of optical components, a videoscope's contains only a signal bus for transmitting the digital image signal. As shown in other images on this page, the control unit and monitor may be integrated into a single handheld package.

Many videoscopes have the ability to transmit as well as record real-time video and still images.

Videoscope technology is one solution to creating a flexible borescope. (The other type, fiberscopes, use optical fiber for image transmission.) Because both of these designs use markedly different components than rigid borescopes, they are considerably more expensive and are regarded as "higher end" products.

This fact has led to difficulty in classifying and referring to different types of scopes. While videoscopes and fiberscopes are technically types of borescope, the term "borescope" is typically used to describe an inexpensive, rigid scope used to inspect straight pipes and other bores. Videoscopes and fiberscopes are therefore colloquially considered to be standalone products independent from borescopes.

A common videoscope application is the visual inspection of aircraft turbines. The image below shows turbine components which can be inspected using a scope. Access to these internal components is achieved by threading the scope through an ignitor port, air inlet, or specially-designed borescope access hatch.

A videoscope's viewing angle (or direction of view [DOV]) and field of view (FOV) are specified in degrees. The

viewing angle describes the scope's view relative to an imaginary longitudinal line through its tube. A distal end which views straight-on has a 0° viewing angle, while a tip which provides a view out the side of the tube is said to have a 90° angle. Videoscopes with the latter viewing angle are able to inspect piping and other narrow cavities with greater detail than a straight-ahead scope.

Depth of field (DOF) is a specification closely related to FOV. DOF describes the distance from the tip of the tube to the furthest object which appears clearly focused.

The image below shows both of these angles for a side-view videoscope. This particular scope is adjustable between 45° and 115° DOV, with a possible FOV of 120°. Note that, as marked, a 90° DOV points straight up, and a 115° DOV points somewhat backwards from the distal end of the tube at left. 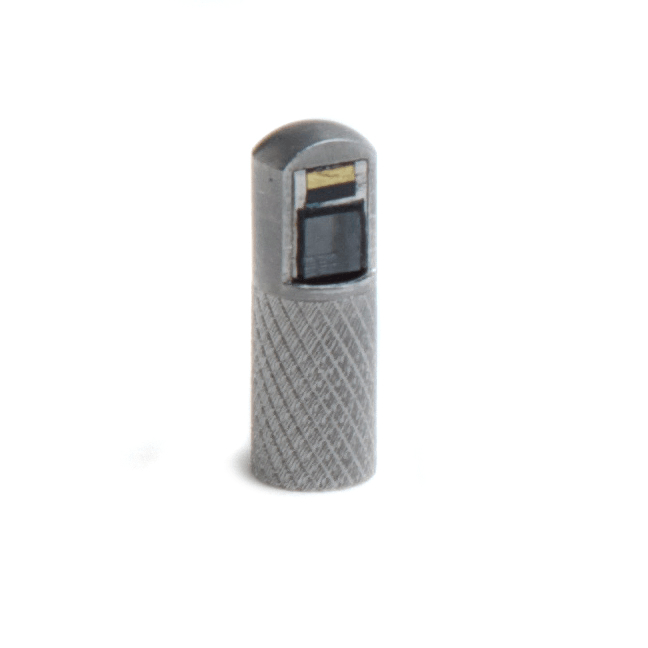 ideoscopes differ from borescopes in that all of the scope's optics are contained within the distal end of the tube. For this reason, manufacturers may provide interchangeable tip adapters to achieve various viewing angles and fields of view using the same device. Adapters may also change the brightness, quality, and/or magnification of an image.