Fiberscopes are borescopes which use fiber optic technology to relay images to an observer.

Fiberscopes use optical fiber to transmit an image from the end of a flexible tube to a viewer's eyepiece. Fiber optic technology is one of two prominent methods of facilitating flexible bore inspection, the other of which is the image sensor technology used in videoscopes.

Like all borescopes, fiberscopes consist of the three main parts described below.

These components are shown in the image below. Many fiberscope tubes feature a semi-rigid section at the distal end (tip), so that the tip can be bent before inserting the tube into a space.

A fiberscope's fiber is typically bundled into an image guide running the length of the insertion section. Most optical fiber used in scopes is made of glass and can reach lengths of 30 feet, but specialty quartz fibers can theoretically produce a 300-foot insertion length.

Typical fiberscope images are unique in that each fiber can relay only one color or similar group of colors. This results in a transmitted image of similar quality to a night-vision camera image, with each individual fiber discernable as a separate pixel-like dot, as shown in the image below. Higher quality, more expensive optics result in more cohesive images.

The image below compares three different borescope images obtained through endoscopy. (A) is a view through a high-quality fiberscope. (B) represents a typical low- to medium-quality fiberscope image, showing pixellation. The black pixels are "dropout" pixels which indicate damaged individual fibers. (C) is a videscope image for comparison.

Comparison of fiberscope and videoscope images.

Because both fiberscopes and videoscopes use markedly different components than rigid borescopes, they are considerably more expensive and are regarded as "higher end" products.

This fact has led to difficulty in classifying and referring to different types of scopes. While fiberscopes are technically a subtype of borescope, the term "borescope" is typically used to describe an inexpensive, rigid scope used to inspect straight pipes and other bores. Fiberscopes as well as videscopes are therefore colloquially considered to be standalone products independent from borescopes.

Fiberscopes are commonly used in nondestructive testing (NDT) applications for inspecting hard-to-reach cavities. Borescopes in general are used to inspect pipes, turbines, engines, tanks and vessels, pumps, valves, manifolds, and many other equipment types. They are also used to aid in finding and removing loose components when used in conjunction with retrieval tools.

Specialized fiberscopes for inspecting organs and cavities within a living body are referred to as endoscopes.

Fiberscope manufacturers typically provide the tube's diameter and length. These two specs must be carefully considered after determining the size and depth of the object or space to be inspected. Diameter is most often specified in millimeters (mm) while tube length is expressed in millimeters, meters, or feet.

While manufacturers do not typically specify the brightness of the illuminating light source, the reflectivity and lighting of the cavity to be inspected must be taken into account before selecting a scope.

Viewing Angle and Field of View

Viewing angle (also known as direction of view [DOV]) and field of view (FOV) are both specified in degrees. The viewing angle describes the device's view relative to an imaginary longitudinal line through the scope's tube. A fiberscope which views straight-on has a 0° viewing angle, while a scope which provides a view out the side of the tube is said to have a 90° angle. Fiberscopes with the latter viewing angle are able to inspect piping and other narrow cavities with greater detail than a straight-ahead scope.

Field of view can be thought of as a cone extending beyond the tip of the tube. As shown below, a 30° field of view results in a narrowly-focused image, while a 120° view is much broader but is capable of less magnification. Selecting an FOV is dependent upon the inspected object's distance from the distal end; as distance from the tip increases, the field of view angle should decrease (and therefore magnification and image quality will increase).

Depth of field (DOF) is a specification closely related to FOV. DOF describes the distance from the tip of the tube to the furthest object which appears clearly focused.

The image below shows both of these angles for a side-view scope. This particular example is adjustable between 45° and 115° DOV with a possible FOV of 120°. Note that, as marked, a 90° DOV points straight up, and a 115° DOV points somewhat backwards from the distal end of the tube at left.

Fiberscopes may be compatible with a number of accessory attachments.

Because characteristics such as field of view and viewing angle are determined by optics in the scope's distal end, many fiberscopes feature a removable tip which can be changed out using different adapters. Adapters may also change the brightness, quality, and magnification of an image when used.

Some fiberscopes are equipped with specialized ports for attaching forceps and other tools. In some scopes these tools are integral to the tube as shown below. Forceps can be used in conjunction with the scope to physically remove damaged or defective components located within the inspection area. 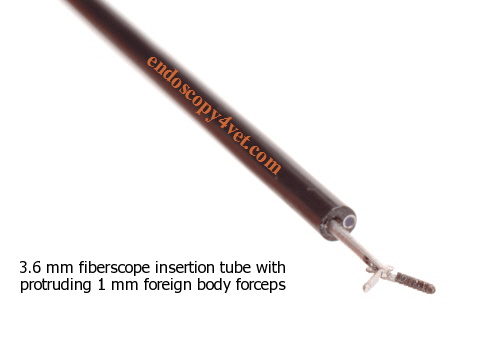 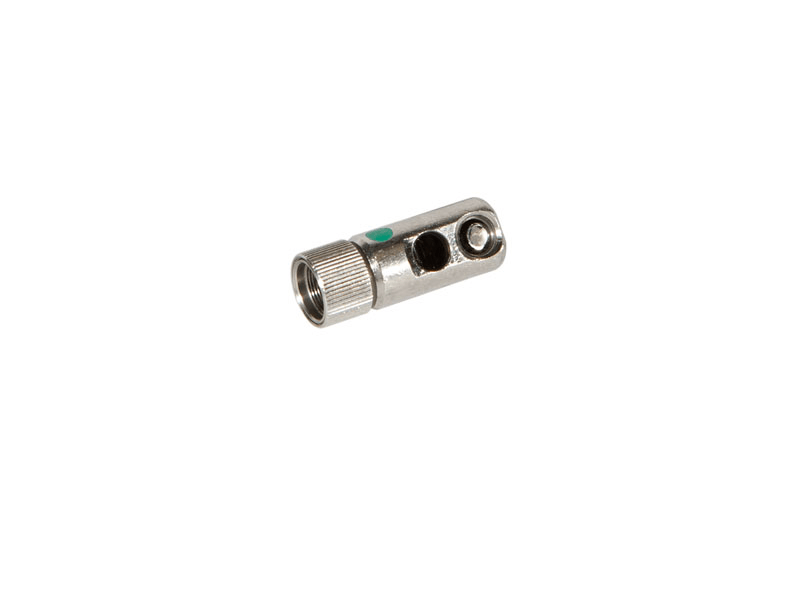 A distal end with integral forceps; a fiberscope adapter.