X-ray sources are vacuum tubes that use an electrostatic field to produce X-rays. They accelerate electrons to a high velocity and then suddenly stop them. X-ray tubes, as X-ray sources are sometimes called, are devices in which energy conversion takes place, i.e. the kinetic energy of fast moving electrons is converted into heat and X-ray energy.

To produce X-radiation, large amounts of electrical energy must be transferred to the X-ray tube. Typically less than 1% of the energy deposited in the tube is converted into X-rays the other 99% appears in the form of heat. Consequently, this limits the use of X-ray apparatus. If excessive heat is produced in the X-ray tube, the temperature will rise above critical values, and the tube can be damaged.

Typically, the tubes used by X-ray sources are made of glass, surrounded by metal, and sealed by a vacuum. The cathode is located in the dome-shaped part of the tube.

Because X-ray sources produce large amounts of heat during the beam-formation process system designs must account for these temperature considerations. The intensity of the produced photons depends upon the atomic number of the anode material, and the number of electrons that hit the anode. For this reason, the anode is usually made of tungsten, due to its high atomic number, which increases the intensity of the X-rays. Tungsten's high melting point is an additional selection consideration.

X-ray source anodes are also made of molybdenum or copper. Modern anode discs are made of a combination of metals. An alloy of rhenium and tungsten is used for the face of the anode disc because it retains its smoothness better than tungsten as the tube ages. Molybdenum is also commonly used because is it not as dense as tungsten and can accept a given amount of heat without a rise in temperature. Often used as the anode disc is a molybdenum disc with a coating of 10% rhenium and 90% tungsten over the target back.

Buyers of X-ray sources should be aware of recent advances in X-ray tube materials. There are several advantages of using a metal/ceramic tube versus a glass tube. These materials allow for higher tube currents to be used because the anode has a higher heat capacity. Another advantage is longer tube life, since the deposition of tungsten on the glass acts as an electrode and shortens the tube life; the addition of a metal enclosure prevents the deposition from altering the ground (and increases tube life). The metal enclosure also decreases off-focus radiation by attracting off-focus electrons to the ground wall, preventing electron back scatter.

X-ray tubes have several basic components. These include: a source of electrons such as a filament with a heating source, a system capable of accelerating electrons across a space where there is nothing to impede them, i.e., a vacuum glass tube with high tension (HT) transformer, and a target structure where the electrons strike, also known as the anode. Modern X-ray tubes have modifications depending on the functionality of the device.

X-ray sources use an X-ray generator to produce a flow of electrons. Electrical current is then transformed to a higher voltage. The energy of the X-ray depends on the electric potential difference of the cathode and anode.

How an X-ray tube works

The Engineering360 SpecSearch database provides information about these types of X-ray tubes.

The Coolidge Tube, also known as a hot cathode tube, is the most popular X-ray source. The characteristics of this device are its high vacuum and its use of a heated filament as the source of the electrons. There is very little gas in the Coolidge tube, which differentiates it from previous X-ray sources. In order to operate the device, the cathode filament is heated. As it is heated, the Coolidge tube emits electrons. The electrons are accelerated towards the positively charged anode and upon their collision, they change direction and emit X-rays with a continuous range of energies.

The advantages of the Coolidge tube are its stability, and the fact that the intensity and energy of the X-rays can be controlled independently 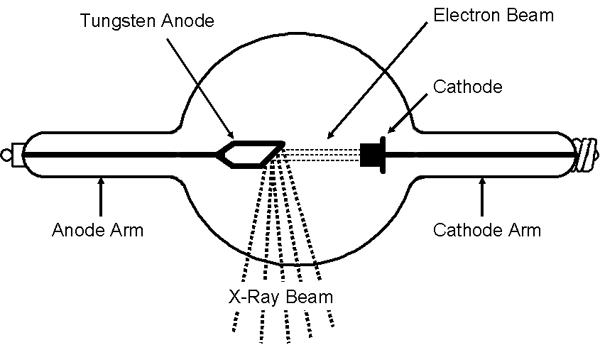 There are two designs for the Coolidge tube.

End-window tubes usually have a transmission target which is thin enough to allow X-rays to pass through the target. This means that the X-rays are emitted in the same direction as the electrons are moving.

Side-window tubes have an electrostatic lens which focuses the beam on a very small spot on the anode. The anode is also specially designed to dissipate the heat and wear by either rotating the anode or by circulating coolant. The side window allows for escape of the generated X-ray photons.

In a rotating anode tube, the anode target disc rotates on a highly specialized ball bearing system. The target is subjected to a focused stream of electrons emitting from the cathode and accelerated by a high potential difference between the target disc and the cathode. When the electron beam hits the anode, it produces the X-ray beam. The cathode provides a controlled source of electrons and the filament is a constructed tungsten wire coil of precise pitch and length. A motor rotates the anode disc at a high speed up to 10,000 rpm and to temperatures of 2000° C. The anode assembly is mounted on bearings and actually forms the rotor of the electric motor. The disc has a tungsten rhenium target area and faced onto a molybdenum disc. The disc is cooled by radiation to the glass then oil.

The advantage of using a rotating anode tube is it permits selection of higher electrical load without the risk of overheating. It can be used in almost every radiography application. Constant advances are being made to the rotating anode tube and recent discoveries have led to the use of new anode material, reduced target angle, increased speed of anode rotation, and new styles of tubes including the grid controlled X-ray tube and metal/ceramic X-ray tube.

There are several types of application-specific X-ray tubes.

Tubes for deep therapy have KVp in the range of 200-300 kV and usually work at 15-20mA. Single focus tubes size (6-8mm) have a hooded anode and target angle of about 35o. The glass envelope is about 60 cm in length to prevent external arcing due to high voltage. These are oil cooled stationary anode tubes. To allow emission of the required primary X-ray beam, a hole is cut in the hood below the target.

These are not being used today.

These are similar to conventional rotating anode X-rays except the rotating anode is bombarded simultaneously by two beams of electrons from two independent cathode assemblies. These are used for stereoradiographic and stereofluoroscopic X-ray examinations.

For maximum visualization of soft tissues of the breast having similar ability to absorb X-rays, a beam of soft radiation (longer wavelength) is required. Longer wavelength can be produced by selecting an X-ray tube which operates at low KVp (20-40). Features of a mammography tube include the use of target made of molybdenum, closer spacing of cathode and anode, a Beryllium window (thinned glass window), and use of molybdenum filter in place of aluminum filter.

CT requires longer exposure times at higher KV than needed for general radiography. They have a heavy-duty rotating anode tube with higher thermal capacity and a smaller focal spot (up to 0.6 mm). These tubes are air cooled with current value up to 600 mA. Some CT tubes are grid controlled for pulsed radiations to reduce the radiation dose.

When selecting X-ray tubes, buyers should be aware of some common variables in X-ray tube design and selection: operating heat produced, operating heat capacity, target angle, focal spot size, duty cycle, operating wattage, application for which the tube will be used, physical dimension considerations, and many others.

Heat is produced in the focal spot area by the bombarding electrons from the cathode.

Where KVe is the effective KV value and KVp is the peak KV value. When used to mean the quantity, voltage or potential, it is written KV or KVp. When used as the unit, it is written as kV or kVp. MAS is the total quantity of electrons passing a point. It is the product of the current (MA) and the time in seconds (S).

In this relationship, w is the waveform factor; its value is determined by the waveform of the voltage applied to the X-ray tube. Values for most waveforms encountered in diagnostic X-ray machines are: constant potential, 1.0; three-phase, 12 pulse, 0.99; three-phase, 6-pulse, 0.96; single-phase, 0.71.

Although the joule is the basic unit for energy and heat, it is not always used to express X-ray tube heat. The special heat unit (HU) was introduced when single-phase equipment was common to make it easy to calculate heat. The heat unit (HU) is a smaller quantity of heat than a joule since one joule is equal to 1.4 heat units.

Since the product of the joules-to-heat unit conversion factor (1.4) and the waveform factor for single-phase (0.71) is equal to 1, the following relationship is obtained:

Here it is seen that for single-phase operation, the heat produced in heat units is the product of the KVp and MAS.

The total heat delivered during an exposure, in joules or watt-seconds, is the product of the power and the exposure time.

For a given object, the relationship between temperature and heat content involves, heat capacity, which is a characteristic of the object. The general relationship can be expressed as follows:

The heat capacity of an object is more or less proportional to its size, or mass, and the material's specific heat. In an object with a large heat capacity, the temperature rise is smaller than in one with a small heat capacity.

In most X-ray tubes, there are three distinct areas with critical heat capacities, as shown in the diagram below. The area with the smallest capacity is the focal spot area, and is the point at which heat is produced within the tube. From this area, the heat moves by conduction throughout the anode body and by radiation to the tube housing. Heat is removed from the tube housing by transfer to the surrounding atmosphere. When the tube is in operation, heat generally flows into and out of the three areas shown. Damage can occur if the heat content of any area exceeds its maximum heat capacity. 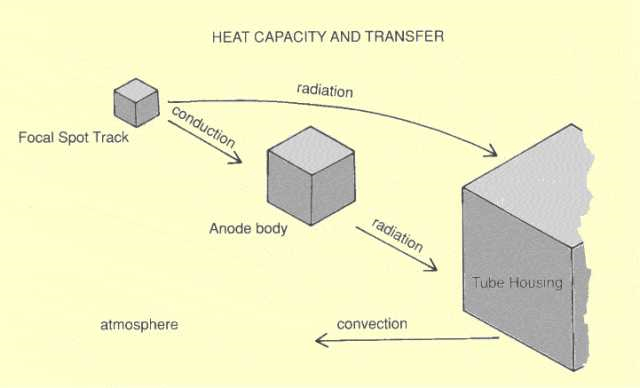 The anode angle determines the actual relationship between the focal spot width, focal spot heat capacity and the size of the of the projected focal spot. The angles generally range from about 7° to 20°. For an effective focal spot size, the track width and heat capacity are inversely related to the anode angle. Anodes with small angles give maximum heat capacity but they are limited with respect to the area that can be covered by the X-ray beam. When specifying an x-ray tube for purchase, the anode angle should be selected by a compromise between heat capacity, especially for smaller focal spots, and field of coverage.

X-ray tubes are used in a variety of applications, such as:

Considerations for choosing an X-ray tube