digital thermostats that include multiple zones, inputs, and outputs.

A thermostat is a device that keeps temperatures stationary; the term itself is derived from two Greek words:  thermos, meaning "heat," and statos, meaning "stationary."

Thermostats control air temperature by sending a control signal to a heating or cooling device. The controller is typically either a bang-bang controller or a proportional-integral-derivative (PID) controller.

Bang-bang controllers, also known as on-off controllers or hysteresis controllers, are feedback devices that switch between two states. They use hysteresis to prevent continuous switching as the temperature passes through the set point temperature. The discrete output does not allow the heating or cooling systems to ramp-up or ramp-down, but instead switches abruptly between on and off.

Proportional-integral-derivative (PID) controllers provide an output signal that is proportional to the difference between the desired set point temperature and the measured value. They sense the rate of temperature change in response to the control signal. They enable precision regulation of air temperature to minimize temperature oscillation and temperature overshoot. 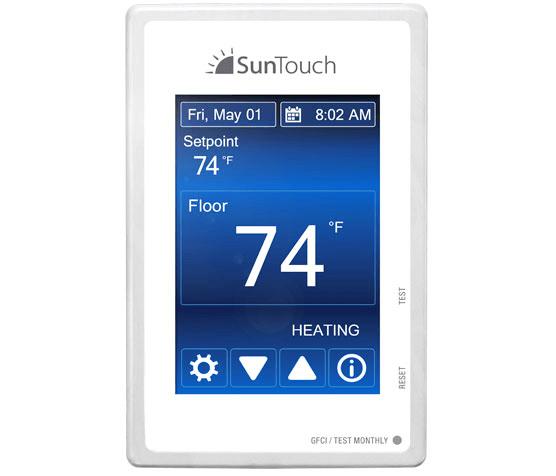 Digital thermostats have no moving parts and are comprised of dedicated sensing elements such as thermistors, resistance temperature detectors (RTD), or a thermocouples and discrete outputs or variable control signals. They may differ by the control logic, the type of display, the number of outputs, and are often programmable. Interconnectivity is key feature of digital thermostats as it allows users to address temperature controls remotely.

Mechanical thermostats operate based on one of several technologies. They generally use thermal expansion of a gas or metal to operate switch contacts. Specific technology types include:

Thermostats are powered by a line voltage, low voltage control circuit, a millivolt-induced voltage, or are otherwise battery operated. Line voltages in the United States are 120, 208, or 240 volts AC. Low voltage circuitry typically delivers 24 volts AC via a control transformer.  Thermostats may be specified by any of the aforementioned voltages.

Thermostats have a set point temperature that is either fixed or field adjustable. The set point is the rated temperature at which the device undergoes a change in state associated with movement of the electrical contacts. Fixed-point devices are rated at a given temperature while field-adjustable device have a temperature range to which the set point can be adjusted.

Thermostats act as the control unit for HVAC systems such as boilers, furnaces, electric heaters, central air, space heaters, or other devices that regulate ambient air temperature. They are also commonly used in household appliances including ovens, stoves, refrigerators, air conditioners, and freezers.