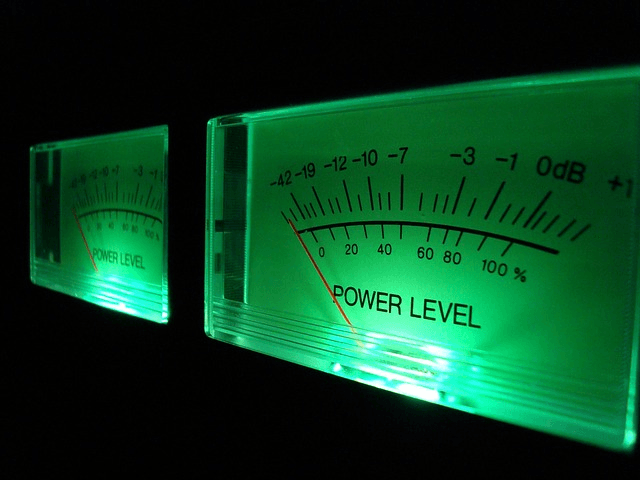 VU meters measure the volume (intensity) of analog audio signals. They display signal levels in volume units (VU), a measure of average volume level. By definition, a volume indicator (VI) reading of 0 VU describes a 600-ohm resistance in which 1 milliwatt (mW) of sine-wave power flows at 1,000 cycles per second (CPS). Most VU meters have a scale from -20 to +3, and rise and fall times of 300 milliseconds (ms). If a constant sine-wave of 0 VU is applied, the meter will achieve 0 VU in 300 ms. Readings on the VU scale are approximate to the base 10 of the power ratio referenced to that level. For a pure 100-Hz sine wave, 0 VU equals 0 dBm or 0.775-V root means square (RMS). In practice, however, VU meters contain an isolating resistor so that 0 VU equals +4 dBm for a pure sine wave.

Selecting audio meters requires an understanding of the differences between VU meters and peak program meters (PPM). Whereas VU meters display the average volume level of an audio signal, PPMs display peak volume. The difference between the reading of a VU meter and a PPM is called the crest factor. VU meters and PPMs also differ in terms of acceleration and deceleration rates (ballistics). Whereas a VU meter takes 300 ms to stabilize when a 1 kHz steady-state tone is introduced, a PPM stabilizes in just 10 ms. Because of their ballistics, then, VU meters must sample the audio signal over a longer period of time than audio meters such as PPMs.

VU meters are designed to provide a very slow response and are optimized for perceived loudness instead of peak performance. In terms of their internal circuitry, they contain a single diode, a selenium bridge rectifier, or a germanium diode bridge. Although active rectification is used to keep the diode voltage-drop from causing large inaccuracies, amplification of the signal can reduce the overall component count. To control the VU meter’s movement and minimize overshoot, some devices include capacitors.

Technical requirements for VU meters are defined in: ANSI C16.5-1942 and IEC 60268-17, specifications from the American National Standards Institute (ANSI) and International Electrotechnical Commission (IEC). Note, however, that many products bearing "VU" or "VU Meter" do not conform to these standards.