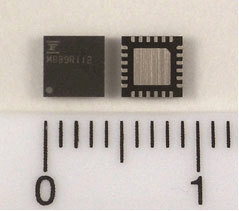 FRAM memory chips have memory cells that contain a specific ferroelectric material such as a crystal of zirconium or titanium, or oxygen and lead. FRAM memory is much faster than Flash memory.

Ferroelectric RAM (FeRAM) is a type of non-volatile memory based on electric field orientation and with near-unlimited number (exceeding 1010 for 5V devices and even more for 3.3V ones) of write-erase cycles.

FRAM memory chips combines the advantages of SRAM in which writing is roughly as fast as reading (70-200 ns), and EPROM non-volatility and in-circuit programmability.

FRAM memory chips do not yet offer the bit density of DRAM and SRAM, but they are non-volatile and faster than Flash/EEPROM memory (write times under 100 nanoseconds), and they have very low power requirements.

FRAM memory technology is compatible with industry standard CMOS manufacturing processes. A ferroelectric thin film is placed over CMOS base layers and sandwiched between two electrodes.

Metal interconnect and passivation completes the process. It is possible to make a ferroelectric memory chip using two additional masking steps during normal semiconductor manufacture, leading to the possibility of full integration of FRAM into microcontrollers and other chips.