Carbon dioxide, along with oxygen, is one of principal gases dissolved in water sources. In fact, CO2 is roughly 200 times more soluble than oxygen and can therefore enter liquids much more easily. The surfaces of large bodies of water, such as oceans, are constantly and rapidly exchanging carbon dioxide molecules with the surrounding atmosphere.

Dissolved CO2 in bodies of water is an integral part of the carbon cycle which allows for sustainable life on Earth. Carbon dioxide naturally diffuses into water, and much of the carbon from these molecules remains in a marine "carbon sink." Between aquatic biomass, oceanic stores, and marine sedimentary rocks, the marine carbon sink stores over 100 quadrillion (1017) metric tons of carbon, which is the most of any sink on Earth. 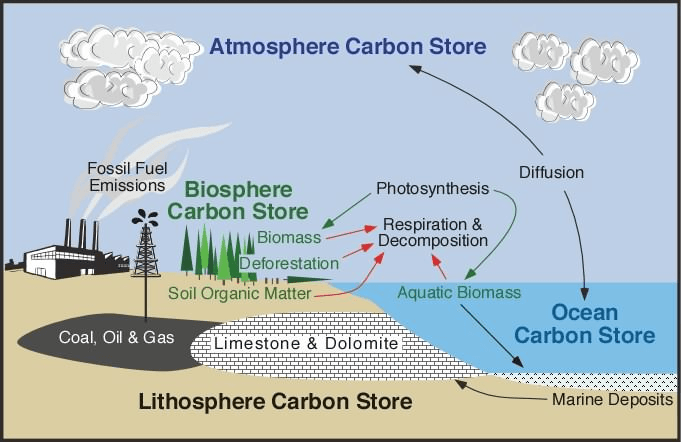 The carbon cycle; CO2 which diffuses into bodies of water is measured as dissolved CO2.

Like oxygen, carbon dioxide is vital to sustainable aquatic ecosystems. Aquatic plants consume carbon dioxide and water in order to form carbohydrate fuel. When plants expel oxygen as a waste product of photosynthesis, they in turn create a sustainable environment for aquatic life such as fish and other organisms.

Difficulties in Measurement and Methods

Dissolved carbon dioxide is considerably more difficult to measure than dissolved oxygen due to the former gas's tendency to dissolve both physically and chemically. When dissolved in water, certain carbon dioxide molecules react with hydrogen and oxygen to form hydrogen carbonate (HCO3-). These new chemical solutions may interfere with dissolved CO2 measurements.

Dissolved CO2 is commonly measured via chemical analysis using titration, but this method is capable of registering erroneously-high levels of carbon dioxide. This is due to the fact that additional solutions within the sample—including phosphates, silicates, and ammonium—may interfere with titration; this problem is especially prevalent when testing aquaculture samples.

Most modern dissolved CO2 instruments are designed to test for the specific gas pressure of dissolved carbon dioxide. This method is considerably more accurate and rules out carbon dioxide which has formed carbonates. It is particularly helpful when testing water quality in environmental applications, as physically-dissolved CO2 is the type which primarily affects fish health.

Considering the information above, it becomes clear that dissolved carbon dioxide is vital to the sustainability of marine ecosystems; for this reason, dissolved CO2 meters are extensively used in water quality testing applications.

Another common application is quality control within beverage, chemical, and pharmaceutical manufacturing industries. Dissolved CO2 meters are frequently used to check CO2 levels in carbonated beverages and to monitor levels during fermentation of beer and similar products. Food and beverage sensors tend to be in-line process types, while those used in biotechnology and pharaceutical applications are typically sterile probe-type devices.

Within the brewing and biotechnology industries in particular, dissolved CO2 meters can be used to measure a number of different characteristics about fermentation reactions. Low CO2 concentration can result in poor yield, and the formation of products and by-products is largely dependent upon carbon dioxide levels within fermenting materials. Carbon dioxide measurement has a number of other applications within biotechnology, including those listed below.

Dissolved CO2 instruments include any device used to measure dissolved carbon dioxide, including meters, sensors, and probes. Meters are typically digital devices which attach to a probe and process an output reading based on an analog or digital signal from the probe or sensor.