Turbidity instruments are used to determine water clarity by measuring the average volume of scattered light.

Turbidity can be casually defined as the observable cloudiness or haziness of a liquid which is caused by suspended solids. From a technical standpoint which better applies to water quality testing, it is defined by the AWWA Standard Methods for the Examination of Water and Wastewater as, "an expression of the optical property that causes light to be scattered and absorbed rather than transmitted in straight lines through the sample."

It is important to note that turbidity is not the direct measurement of suspended particles but more so of the scattering effect the particles have on incident light. Considering this statement, particle shape and size does largely determine light scattering effects, as does the refractive index and color of the sample. 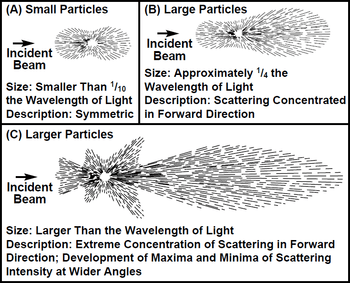 The relative difficulty of this formula is that, to measure the diffusion coefficient, the absorption coefficient must first be known. For this reason, turbidity measurements must be compared to known standards. These standards are described in nephelometric turbidity units (NTUs), which were developed from the older formazin turbidity units (FTU). NTUs and FTUs are essentially the same unit, except for the fact that NTUs call for 90° measurement of attenuated light; while FTUs most often use 90° measurement as dictated by the U.S. Environmental Protection Agency (EPA) and ASTM, it is not specifically necessary.

(Measurement angles are described in more detail below.)

Turbidity is a key component of any comprehensive water quality analysis. Suspended particles can be the result of phytoplankton within the water source, or sediment from nearby human factors such as construction, farming, and mining. Turbidity measurement is common in the following water quality applications.

The most common turbidity instrument is the turbidimeter, or turbidity meter. These devices consist of three main component groups: the light source, sample container, and photodetectors.

A turbidimeter's light source provides the incident light to be passed through the sample. Most light source consist of tungsten filament lamps, which provide polychromatic light with a wide wavelength range. At times, however, this wide wavelength can cause interference in turbidity measurement as some natural colors and organic matter can absorb artificially high amounts of certain wavelengths. In addition, tungsten lamps are highly dependent on the stable voltage of the light source power supply and are subject to burnout over time.

For the reasons listed above, some turbidimeters use monochromatic, narrow-wavelength light-emitting diodes (LED), lasers, or mercury lamps as light sources. While these lamps eliminate the interference common in tungsten types, they are also less sensitive to small particles.

Samples are typically introduced in glass cuvettes in the case of benchtop and portable turbidimeters. On-line devices occasionally use glass sample cells but more often use sample liquids which flow through a chamber between the light source and photodetectors.

Photodetectors output an electrical signal proportional to the amount of detected light. Commonly-used detectors include photodiodes, photomultiplier tubes, and cadmium sulfide photoconductors. Because each of these detector types is especially sensitive to certain wavelengths, users must factor detector differences into turbidity measurements when using polychromatic light sources. For example, photodiodes are much more sensitive to short wavelengths when used with tungsten filament lamps, therefore making them more sensitive to the detection of small particles.

The detector configuration for a nephelometric ratio turbidimeter—one of the most common modern types—is shown below. All nephelometers primarily measure light scattered at a 90° position and often include additional detectors for sensing back- and front-scattered as well as transmitted radiation. The output of these sensors would be mathematically combined and formatted into a turbidity measurement.

Turbidimeters can be grouped into three form factors: benchtop, portable, and on-line.

Benchtop devices use glass samples and typically use ratio technology to measure turbidity. Many devices feature switches to turn off ratio functions so that they can also be used as single-beam designs.

Portable designs function similarly to benchtop types, but are built with rugged features for field activities, such as sampling upstream from treatment plants. They are typically battery-powered.

On-line turbidimeters are affixed to process streams within treatment plants and often employ single-beam or four-beam operation. Some specialized on-line turbidity meters may involve scattered beam or transmittance designs. Most on-line instruments are capable of sampling water flowing at between 0.1 and 1 liters per minute. Because on-line devices are subject to continuous flow and sampling, their detectors must be cleaned frequently to prevent fouling and eventual failure. 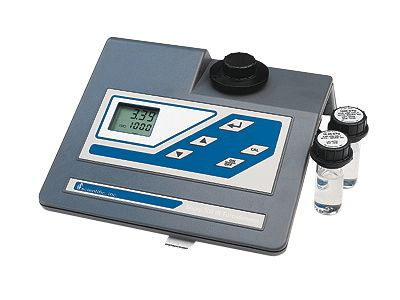 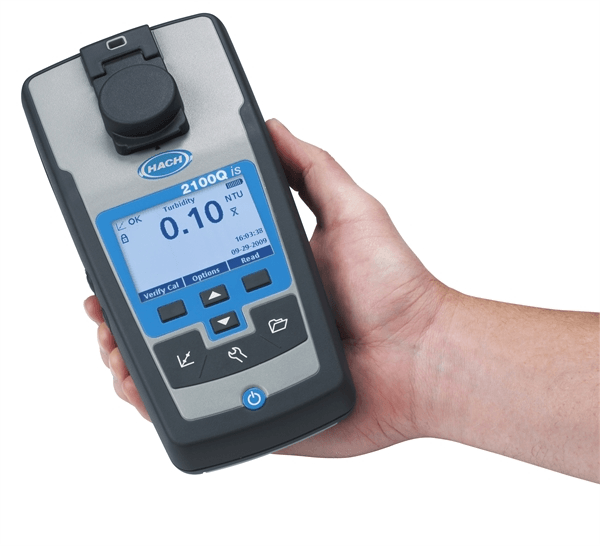 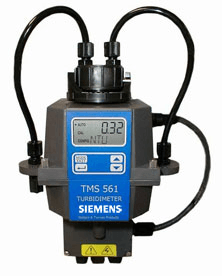 Standards play an extremely important role in turbidity measurement, since accurate readings often depend on calibration using known turbidity standards as described above. Important standards include: