Dissolved oxygen (DO) meters are used to measure the amount of dissolved oxygen in a liquid.  Oxygen makes its way into water through a variety of processes, including aeration, as a byproduct of photosynthesis, and from surrounding air. Any healthy aquatic system which can support aerobic life must contain certain amounts of oxygen; healthy bodies of water typically register at least 5 mg/L of dissolved oxygen. DO levels less than 5 mg/L can result in stressed aquatic organisms, and levels which remain as low as 1 mg/L for even a few hours can result in widespread fish kills. Conversely, dissolved oxygen saturation can also be harmful to aquatic life.

Considering the information discussed above, it becomes clear that dissolved oxygen measurement is extremely important when evaluating the health and sustainability of aquatic ecosystems.

Dissolved oxygen levels may be affected by a variety of natural factors, some of which include: 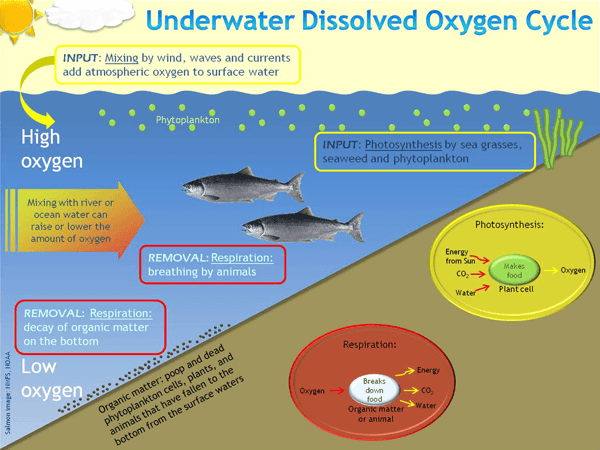 Dissolved oxygen levels are rarely constant and fluctuate with changes in season, temperature, and time of day. Even within a single body of water, DO levels vary within a vertical water column (in lakes or large rivers) or horizontally within the waterway (in smaller rivers and streams). DO variances due to temperature change are somewhat tempered by changes to solar activity, which affects dissolved oxygen levels in an opposite fashion. As shown in the image above, increased levels of photosynthesis result in higher amounts of dissolved oxygen. Because photosynthesis increases with greater amounts of sunlight, the process results in elevated DO levels—independent of water temperature effects—during daylight hours. At night—when photosynthesis activity decreases and decomposition continues—DO levels tend to fall independently of temperature factors. Considering the many variables listed above, DO levels are clearly determined by complex interactions of environmental and biological conditions within a body of water.

The graph below describes a typical DO profile consisting of several days' worth of measurements. Bearing in mind that cold water contains more dissolved oxygen, we can deduce that these readings probably began around dawn on a cool day. We can also determine that from mid-day on day 3 (hour 70) water temperatures steadily increased, as all DO measurements were lower than the previous days.

Dissolved oxygen meters consist of a DO probe connected to a meter/analyzer and are similar in construction to pH meters. The probe is comprised of two electrodes suspended in a potassium chloride (KCl) electrolyte solution, all of which is enclosed with glass and/or a semipermeable membrane. The electrodes are connected to the meter, which provides a small DC current to the electrodes via wiring. When the sensor is submerged in a liquid, oxygen from the liquid crosses the membrane and reacts with the cathode, causing a measurable current change; this change is converted into a millivolt output and is finally displayed by the meter. 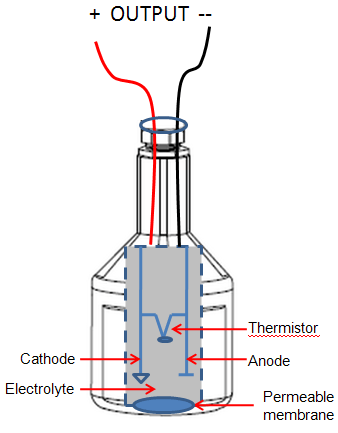 The methods for cleaning and maintaining a dissolved oxygen probe are also similar to those for maintaining a pH probe. Ensuring proper levels of electrolyte solution, eliminating membrane leakage, and routine calibration are key factors in maintaining accurate meter output.

Because dissolved oxygen levels change rapidly when water is removed from its source, DO meters are commonly portable, handheld devices suitable for repeated field measurements. The image below shows a typical handheld dissolved oxygen meter.

Dissolved oxygen meters may be produced, tested, and used based on various standards. Example standards include:

State of Washington Department of Ecology - Dissolved Oxygen in Streams