Piston actuators are used when the stroke of a diaphragm actuator would be too short or the thrust is too small. Compressed air is applied to a solid piston contained within a solid cylinder. Simple designs have the air fed into a central chamber and the air forces the piston upwards. When the air pressure is removed, the shaft moves in the opposite direction due to the reverse force spring. Piston actuators can also being double acting, meaning the air can be fed into either side of the piston since there is not a return spring.

Diaphragm actuators have a thin flexible membrane that actuates via a compressed air supply. This type of actuator is single acting because the air is only supplied to one side of the diaphragm, and they can either be direct acting (spring-to-retract) or reverse acting (spring-to-extend).

The advantages of pneumatic valve actuators are that they are strong, light, simple, and fast. The disadvantage is that precise position control is not possible except at full stops.

Each type of actuator is designed for a particular type of valve. Valves can be sorted by their motion and their function.

Rotary hydraulic valve actuators - Rotary actuators are used for rotary motion valves such as ball, plug, and butterfly valves through a quarter-turn or more from open to close. The closing element is generally a disc or ellipse which turns about an angular shaft. Rotary motion valves specifications include:

Throttling valves can be moved to any position, including fully open or fully closed, within the stroke of the valve. Typically, valve actuators are added to throttling valves as part of a control loop that includes a sensing device and circuitry.

Actuation time is the time it takes to fully close the linear motion valve.

Acting type is an additional specification.

With double-acting devices, fluid pressure actuates the valve in both directions.

Number of turns applies to multi-turn actuators. It defines the number of turns preformed as the rotating valve stem moves from the fully closed to fully open position.

Stem diameter is the diameter of the stem which lifts and lowers the valve disc.

Control signal inputs include milliampere, voltage, and pressure signals are common control signal inputs. Throttling valves regulate the flow, pressure or temperature of the service. They can move to any position within the stroke of the valve and hold that position, including full on or full off. The addition of an actuator to a throttling valve, which has the ability to adjust to a signal, is called a control valve. An actuator used in throttling or modulating service is part of the control loop consisting of a sensing device, controller and an actuator mounted on a valve. The actuator receives a control input signal from the controller or positioner and adjusts closure element position accordingly.

Air supply pressure range is the input pressure needed to achieve the desired torque or thrust output. A good supply of compressed air is essential to provide clean and dry air at the right quantity and pressure.

Operating temperature is the range of ambient temperature that the valve actuator can properly function within.

The National Electrical Manufacturers Association (NEMA), a non-profit trade organization, rates enclosures for electrical equipment. Devices with NEMA 4 and 4X ratings are suitable for indoor or outdoor use and provide protection against dirt, rain, sleet, and snow.

Overtorque protection - The actuator uses a torque sensor to "switch off" electric motor when safe torque level is exceeded.

Integral pushbuttons and controls - The actuator has controller options that enable the actuator to be operated locally. 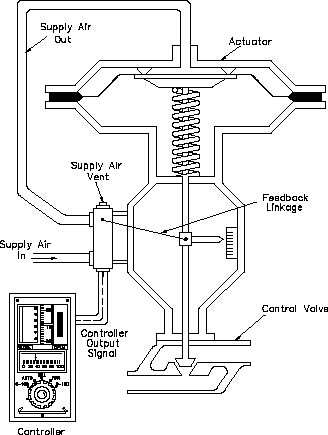 Travel stops or limit stops - Travel stops restrict the actuator's linear or rotary motion. Limit switches are electromechanical contacts or non-contact proximity sensors that allow the position/status of the actuator to be monitored from a remote location. Usually the signal (or lack of signal) generates some action in the process.

Manual overrides - Handwheels, levers, and hydraulic hand pumps which can be used to manually override electric value actuators in the event of an emergency. This safety feature is highly recommended for use in emergency situations which may require the valve to be actuated manually.