Dimensional and profile scanners gather two-dimensional (2D) or three-dimensional (3D) information about an object. They incorporate a wide range of scanning technologies and form factors.

There are numerous methods and scanner types for dimensional scanning of a physical object. These types are discussed in detail below.

Laser scanning is a common method for 3D profiling. It is referred to as an active method, as laser scanners emit radiation rather than simply detect it. Laser scanning uses one or more techniques, including laser triangulation, time of flight, and phase shifting, to provide 3D measurements of a part. These methods are described in the list below.

Laser triangulation involves projecting a line, point, or (more frequently) a stripe, which is reflected by the object and captured by a sensor which is a fixed distance from the laser emitter. The sensor detects the reflection angle, which is used to calculate 3D measurements. Scanners which use laser triangulation are typically portable and easy to use but less accurate than other types.

Time of flight scanning involves the reflection of pulsed emissions off of an object; the reflection is then detected by a sensor. Since the precise speed of laser light is a known constant, the elapsed time between emission and detection is measured to determine the distance to the object and map its surface. These scanners are capable of long-range imaging (up to 1000 m) but are typically plagued by noise and slow speeds.
Phase shift scanners compare the phase shift in reflected laser light to a standard phase. This method is similar to but slightly more precise than time of flight scanning, as the measurement of phase further refines the measured distance. These devices are fast, accurate, and low-noise but are limited to medium-range scanning. 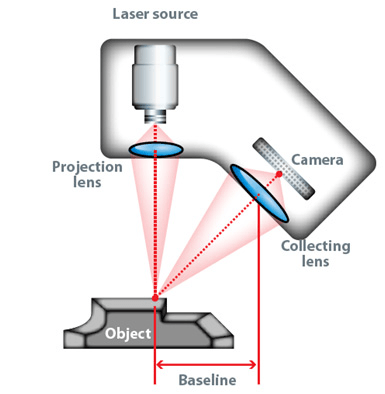 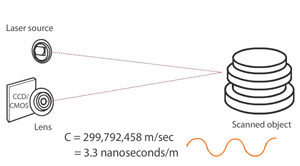 Photogrammetry and videogrammetry use still and video cameras, respectively, to digitize objects. They are both referred to as passive scanning methods, as they detect visible light but do not emit radiation. In the case of photographic imaging, scanners take multiple images of an object and reconstruct them by referencing certain points common to each photograph. Photogrammetry is often used in conjunction with other 3D scanning techniques to provide full surface measurements and improve tolerances over large areas.

These two imaging techniques may be employed in the scanner systems below.

Stereoscopic scanners employ two video cameras which view an object from slightly different perspectives. Distance to each image point can be determined by analyzing the subtle differences between the camera images.

Photometric scanners employ multiple images taken by the same camera. Surface orientation on each individual pixel is then determined.
Silhouette scanners (setup shown at right) create outlines using a sequence of photographs. These silhouettes are extruded and intersected to approximate an object's shape. This method is relatively less accurate than other photogrammetric techniques.

Coordinate measuring machines (CMM) are contact scanners which use movable probes to measure an object. Each machine axis is equipped with encoders that track the movement of the probe. They are typically large, fixed devices but are also available in portable form, albeit with reduced accuracy. CMMs are capable of significant precision but have several inherent disadvantages, including the need for direct contact and slow speeds. Size and form factor are important specifications to consider when selecting a dimensional scanner. Most scanners are designed to measure and digitize a relatively small, discrete part, and as such are semi-permanent benchtop or free-standing machines. However, some photogrammetric and videogrammetric scanners are handheld in order to scan and measure much larger objects such as buildings. An example of a portable handheld scanner is shown at the top of this page.

Scanners may be manually controlled, which is typically the case in portable and handheld devices, or automatically controlled using computer numerical control (CNC) or a personal computer (PC). A CNC machine-mounted scanner can be combined with a CAD system and additional tooling heads to provide an integrated manufacturing solution, as shown in the video below.

The standards below pertain to dimensional and profile scanners. These published documents may govern the production, testing, and use of products.