Conductivity as an expression of conductance per volume is expressed in siemens per centimeter (S/cm). It is occasionally described in terms of mhos/cm (as "mho" is the backward spelling of "ohm").

When measured using an electrode, conductivity can be calculated (typically using a calibrated meter) according to the formula below.

A = area of electrode plates

The figure L/A is particularly important because it represents the electrode's cell constant, which is sometimes referred to as K. This parameter can be adjusted to increase accuracy when measuring solutions with varying conductivities. For example, when measuring a low-conductivity solution the electrode's poles should be made smaller or placed closer together to result in a cell constant of less than 1. This raises the conductance in order to make it more easily sensed by a meter. The opposite can be performed for high-conductivity solutions to render conductivity values more manageable.

Recommended cell constants for the measurement of certain fluids.

While conductivity measurement is relatively inexpensive, nondestructive, and easy to perform, its major drawback is that it is not ion-specific, meaning that it cannot distinguish between the different types of ions being measured. In order to measure specific ions, conductivity electrodes and meters must be paired with other water quality determination methods.

Some specific applications for conductivity electrodes include:

Electrode Construction and Use

Electrodes are sometimes referred to as "conductivity cells." All electrodes sense ions within a solution, then return either a measured voltage or a potential difference to a corresponding meter.

Conductivity cells usually contain either two or four poles. Three-pole devices were once common but are now generally superseded by four-pole cells. Two-pole cells consist of two platinum plates which form rings around the electrode; these rings are covered with a spongy platinum coating to reduce polarization between the poles. These cells are operated by applying a current to both poles and measuring the resulting voltage. Two-pole electrodes are typically best-used for low- to medium-conductivity measurement requiring high accuracy.

Four-pole cells are designed to eliminate the polarization effects sometimes encountered with two-pole designs. These electrodes use two pairs of poles which effectively isolate the measurement circuit. Current is only applied to the outer poles, which allow the inner poles to measure the resulting voltage without polarization. Four-pole electrodes are used in higher-conductivity applications which allow for frequent recalibration and diagnostics.

A four-pole design, showing voltage (V) and current (I) loops.

Toroidal electrodes are specialized devices designed to avoid contact between the electrolytic solution and the poles. These use two toroidal coils—a drive coil and pick-up coil—to create a current field proportional to the solution's conductivity. Toroidal electrodes are used in applications where it is desirable to avoid contacting the sample solution, but they are typically less sensitive than the contact types listed above. 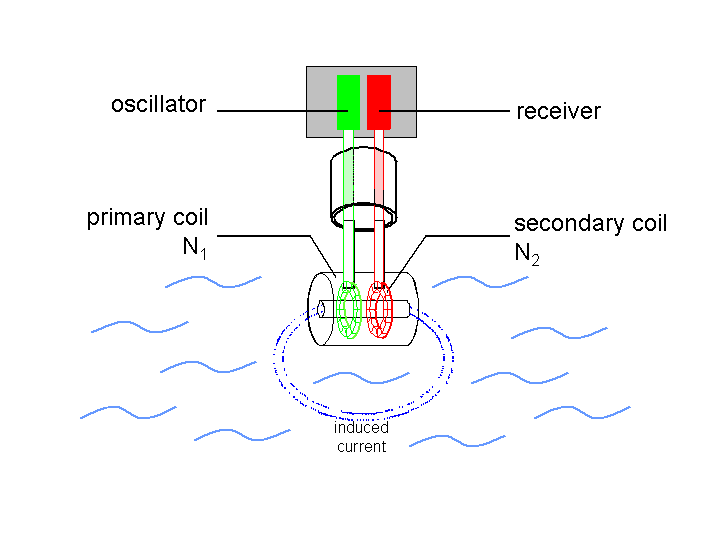 Maintaining and properly storing electrodes is of paramount importance. Contamination of electrode surfaces can result in severe polarization errors. To avoid this, users are typically advised to rinse electrodes with deionized water after each use; electrodes which have been used with water-immiscible solvents should be cleaned with a miscible solvent to avoid contamination. Storage of electrodes requires constant immersion in deionized water and conditioning before re-use.

Because they are common as water quality test instruments, conductivity electrodes are frequently used in conjunction with published standards. These documents describe best practices for use and methods for cleaning and calibrating electrodes. Some major standards are:

BS EN 27888 - Method for the determination of electrical conductivity