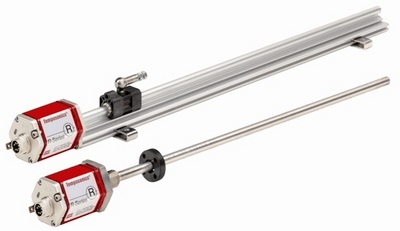 Magnetostrictive position sensors are non-contact linear position sensors that use the momentary interaction of two magnetic fields to produce a strain pulse that moves along a waveguide. One field is from a magnet that moves along the outside of the waveguide. The other field is from the waveguide itself. Magnetostrictive position sensors that provide absolute measurements produce a unique signal for each point along the axis of travel. The advantage to this type of sensor is that it is non-contact and there is no wear or friction. It is also not affected by vibrations so there is no limit on the number of operating cycles. The disadvantage is the dead band on both sides of the sensor which cannot be reduced to zero.

Magnetrostriction is a property of ferromagnetic materials to expand or contract when placed in a magnetic field. The sensor senses the position of the permanent (position) magnet to determine the distance between the permanent magnet and the sensor head. 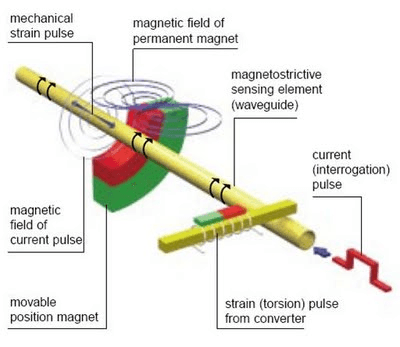 Typically, the waveguide wire is enclosed within a protective cover and attached to the device that is being measured. Applying a current pulse generates a sonic wave that travels along the waveguide to a small piece of magnetostrictive material that passes through a coil and is magnetized by a small, permanent magnet. The stress induced by the sonic wave causes a wave of changed permeability in the magnetostrictive material, resulting in a change in its magnetic flux and the production of voltage output from the coil. Electronic circuitry detects the voltage pulse and conditions it into the desired output.

At the sensor rod tip, at the end opposite the head, there is an unusable area called the dead zone. The system must be designed so that the front face of the position magnet will come no closer to the tip than the specified dead zone distance.

Depending on the sensor's characteristics, measurements can be either absolute or incremental. Magnetostrictive position sensors are generally absolute.

Typically, the position is read after power cycling. There are several types of outputs.

There are many electrical and digital outputs for magnetostrictive sensors. Some examples include:

Another helpful video with information can be found here