CPU coolers are heat sinks which are specifically designed to remove waste heat generated by a central processing unit (CPU). They may include integral fans for active cooling and often fit standard CPU sockets.

Computers are carefully engineered to generate as little heat as possible, as high temperatures damage semiconductor components and reduce processor speeds. Component reliability is also reduced by the square of an increase in ambient temperature, so that a component becomes 25% less reliable when ambient temperature doubles due to waste heat.

Integrated circuits such as the CPU and graphics processing unit (GPU) are the primary generators of waste heat in a modern computer and represent known "hot spots" within a computer chassis. Therefore, computer coolers are typically designed to mitigate heat from these areas by leveraging airflow or using another cooling method.

While some CPU coolers may take the form of passive heat sinks mounted to standard CPU sockets, most are active devices in that they use means other than stationary radiating fins to dissipate heat. Some common technology types for active coolers are discussed below.

Most computers include at least one fan to facilitate the drawing of cool, ambient air from outside the chassis, the expulsion of warm air from inside, or a combination of both. Fans may also be used to move warm air across a heat sink in order to be cooled. Cooling fans attach to a computer chassis using screws and typically connect to system components using a three- or four-pin Molex connector.

The following components use one or several fans to expel waste heat; HDD and northbridge chip fans are rarely used compared to the other components.

Designing a fan-cooled computer chassis requires careful consideration of airflow. Modern desktop computers and laptops include an exhaust fan at minimum, with multiple-fan setups possible in desktop cases. A multi-fan configuration may include an exhaust fan, a drawing fan to increase the speed of incoming ambient air, and a side fan for intake or exhaust.

The image below shows a cooling configuration typical of high-end desktop computers. This particular design uses three fans at the front and bottom of the case for increasing cool air intake, and three or four fans at the top and back for warm air exhaust. Note that this setup includes active HDD cooling, a feature not typical in lower-end desktops.

Fan cooling is used when natural airflow through a chassis is insufficient to remove waste heat. Insufficient airflow is typical in nearly all modern computers, and is a result of faster processors, resistance due to airflow impediments, and pressure differences.

The formula below is used to calculate required airflow through a computer chassis.

The formula below represents a simplified version of the one above. It discounts effects such as heat loss through the chassis walls and assumes constants for specific heat (Cp) and density (r) at sea level.

For example, a chassis with a 500-watt load, 120° F maximum temperature and 90° F typical temperature would require approximately 53 cubic feet of airflow per minute. By considering this value along with the free air ratings and potential chassis placements of different cooling fans, an engineer can determine how to best dissipate heat.

Computer cooling using liquids was pioneered in early supercomputers and is now used in high-performance systems primarily to cool CPUs. Water cooling systems usually include a water block (essentially a water-containing heat sink), a pump, and a heat exchanger. These three components may be located within the computer's chassis, or the pump, heat exchanger, and fluid reservoir may be externally located.

Water cooling involves pumping cooled water or a specialized fluid into the water block, which is located near a heat-generating component. The water then flows through the water block's integral heat exchanger, where it increases in temperature and returns via tubing to an external heat exchanger (often a radiator). The water is then cooled and pumped back through the system. 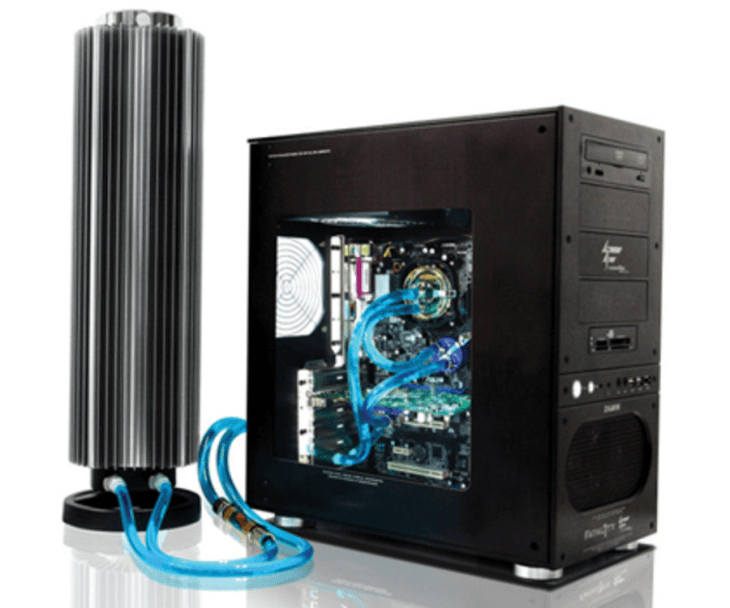 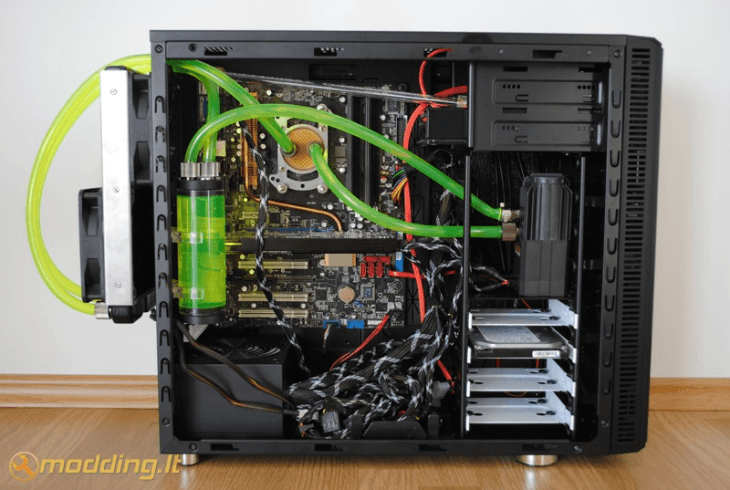 Water cooling allows for cooling of specific components with much greater efficiency than fan cooling, and is also much quieter than a fan. For users who need additional cooling, a water-cooled system uses much less space than a dedicated CPU fan/heat sink combination. Downsides of water cooling include higher cost, the need for specific chassis configurations to accommodate extra components, and the propensity for leaks.

Liquid cooling is rare in mainstream desktop computers, although some manufacturers employ it in higher-end, high-performance machines. Many users who routinely overclock their computers (i.e., run them at speeds higher than the specified clock frequency) use kit-built or home-designed water coolers in lieu of less-efficient fan cooling.

Thermoelectric coolers use the Peltier effect, in which heat dissipation occurs between two dissimilar semiconductor materials to which a voltage is applied. They are relatively inefficient, solid-state (and therefore noiseless), and use an enormous amount of power (sometimes over 70 W). In addition, Peltier coolers only dissipate heat across the surface of the cooling element, meaning that a fan or other traditional cooling method is also necessary to move heat out of the chassis. Like water and phase change coolers, thermoelectric cooling is a specialized method reserved for components which are frequently overclocked. 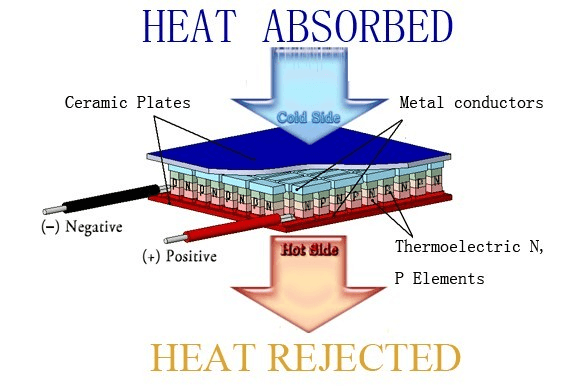 Phase change coolers represent one of the rarest cooling methods. These systems use a compressor similar to that within a window air conditioner to change a gas mixture into a liquid. The liquid is pumped into an

evaporator, which is frequently mounted directly to a heat-generating component. The evaporator changes the liquid back into a gas, absorbing latent heat in the process.

Phase change coolers are capable of extreme cooling (often down to -150° C) and are most frequently used by dedicated overclockers. The systems have several drawbacks which prevent them from being employed by users other than high-performance specialists. Phase change systems are complicated to install, requiring numerous devices and copious insulation to prevent condensation on pipes. Similarly, poorly designed systems can result in iced components due to overcooling, as shown at right. They are also noisy, as they are essentially miniature refrigerators within a computer.

Most fan and passive heat sink CPU coolers are produced to mount to a standardized, manufacturer-specific

socket. There are over two dozen socket designs ranging from 242- to 1366-pin mounting styles. A complete list of common CPU sockets and compatible processors can be found here.

The image below shows a fan-type CPU cooler which is compatible with Slot 1, an older socket used for Intel Celeron and Pentium processors. While Slot 1 sockets involve 242-pin mounting, the cooler actually mounts over the installed processor using integral legs and employs a typical 3-pin Molex connector to connect to a power source.