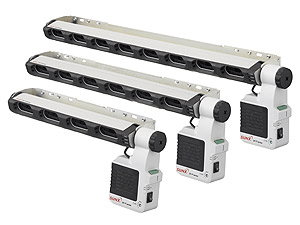 Static eliminators or static ionizers eliminate static and dust and can neutralize and clean surfaces at remote distances. Static neutralization is a practical method of static reduction; however complete static elimination is not readily attainable. In its simplest form, a static eliminator or static ionizer is a static reduction device that produces positive and negative ions which are attracted to an unbalanced surface or material. As long as friction is not reintroduced, static electricity remains at minimum levels. Since static eliminators vary in terms of capabilities, a careful consideration of performance specifications is an important part of product selection.

Static electricity is a stationary electric charge imposed on a solid surface. The solid surface either gains or loses electrons by interacting with other materials or surfaces, most commonly after any amount of friction has been applied. The resulting surface will have an excess of either positive (+) or negative (-) charges that attract opposing charges and repel like charges. The study of stationary or slow moving electric charges is known as electrostatics.

The electrostatic forces described by Coulomb's Law interfere with industrial processes. Unfinished surfaces may attract dirt, repel paints or coatings, cling to other objects, generate sparks, or otherwise cause irregularities in the finished product. Ionizers and static eliminators are designed to dissipate static electricity, ensuring a clean environment and preventing production defects from occurring.

Ionizers and static eliminators  use one of several operating principles in order to neutralize an unbalanced surface.

Corona discharge static eliminators produce positive and/or negative ions by placing a high voltage on a sharp-pointed electrode in close proximity to a grounded shield or casing. With the voltage applied the air between the electrode and the grounded casing is broken down by a static ionizer, generating ions. Various types of corona discharge methods are based on the number of electrodes and voltage source used. AC systems generate positive ions during the first half-cycle of the waveform and negative ions during the second half-cycle of the waveform. DC systems only produce a single polarity from a single electrode. DC systems that use both positive and negative electrodes may suffer from poor ion balance at longer distances. Pulsed voltage systems produce higher ion densities due to the stepped waveform.

Research suggests that a 5 mm pitch is ideal for most static reduction devices.

A tighter pitch does not necessarily increase the effectiveness of static elimination devices such as static neutralizers and static cleaners. Static eliminators are often made of stainless steel fiber and conductive acrylics; however, the use of fibrous static reduction materials is not recommended if fiber shedding could cause electrical problems inside machinery. In such cases, liquid static cleaners are suitable choices.

Photoionizers use the photoelectric effect to neutralize static electricity. Soft X-rays ranging from 3keV to 9.5keV are emitted by the ionizer. Stable atoms and molecules near the work surface become excited and share valence electrons, producing ions that interact with and neutralize charged objects and surfaces. Photoionozers have no electrodes to maintain, do not require pressurized air, and neutralize fast moving objects. 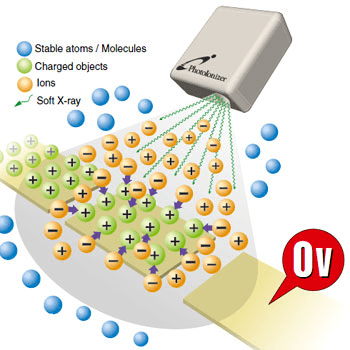 Benchtop devices are used to neutralize a localized work space and are not designed for in-line processes or to eliminate static charges over larger areas.

Blow off guns are handheld static eliminators that use compressed air to control the flow of ions toward the work area to be neutralized.

Ceiling emitters are designed for use in large areas, like cleanrooms. The ceiling mount along with an air supply, blower, or other ventilation device allows static removal over larger distances.

Ionizer bars may or may not require an air source. Devices without an air supply suffer from a limited range while devices that use compressed air can displace or disturb sensitive and lightweight products and materials. They are mounted at a calibrated distance as to produce ions at a targeted area without overshooting or suffering from poor ion balance. 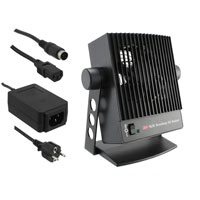 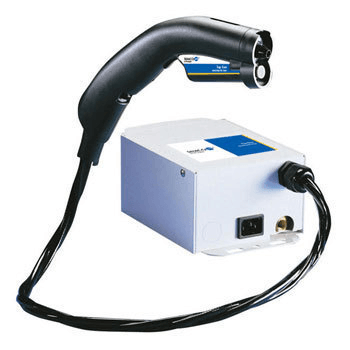 The National Fire Protection Association (NFPA) recommends the installation of a static eliminator or static cleaner for coating and printing applications. The breakdown of stationary charges can generate a spark and pose a fire hazard. The specific standard, NFPA 77, outlines accepted practices that apply to the identification, assessment, and control of static electricity for purposes of preventing fires and explosions.