Optical polarizers are optical devices that can transform unpolarized or natural light into polarized light, usually by the selective transmission of polarized rays. They are used in infrared (IR), visible light, and ultraviolet (UV) applications.

There are many different types of optical polarizers.

More information on these specifications can be found on IEEE GlobalSpec's How to Select Linear Polarizers.

Optical polarizers are available with features that include an antireflective coating, pigtail, and broadband connections. An antireflective coating will improve transmission, reduce glare, and improve readability. Broadband has a uniform optical characteristics over a wide area of the spectrum in the polarization rotator. Pigtail describes a polarization rotator which has a short length of optical fiber permanently fixed to a component. They are used to achieve accurate mounting for precision alignment of optical components. 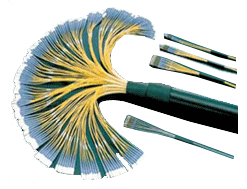