Cooling towers are heat removal devices for industrial processes. They are defined as any open water recirculation device that uses fans or natural draft to draw or force air to contact and cool water by evaporation. Cooling towers minimize the thermal pollution of natural water heat sinks and allow the reuse of circulating water. When one thinks of cooling towers, the large towers associated with nuclear power plants probably come to mind. These cooling towers are an extreme case in terms of size, but all function in the same way. These and other smaller towers are used widely in industrial applications.

The use of evaporation is the primary advantage of cooling towers as a type of heat removal equipment. They are used to provide significantly lower water temperatures than those achievable with air-cooled or dry heat removal processes.

All cooling towers consist of a few basic components, including the following.

The fill (made of plastic or wood) adds surface area and slows water descent to encourage evaporation and heat transfer between the air and water. Optimum packing has a high surface area but low resulting pressure drop.

The cold-water basin or sump basin is located near the bottom of the tower and receives sump water and recirculates it through the system via pumps. 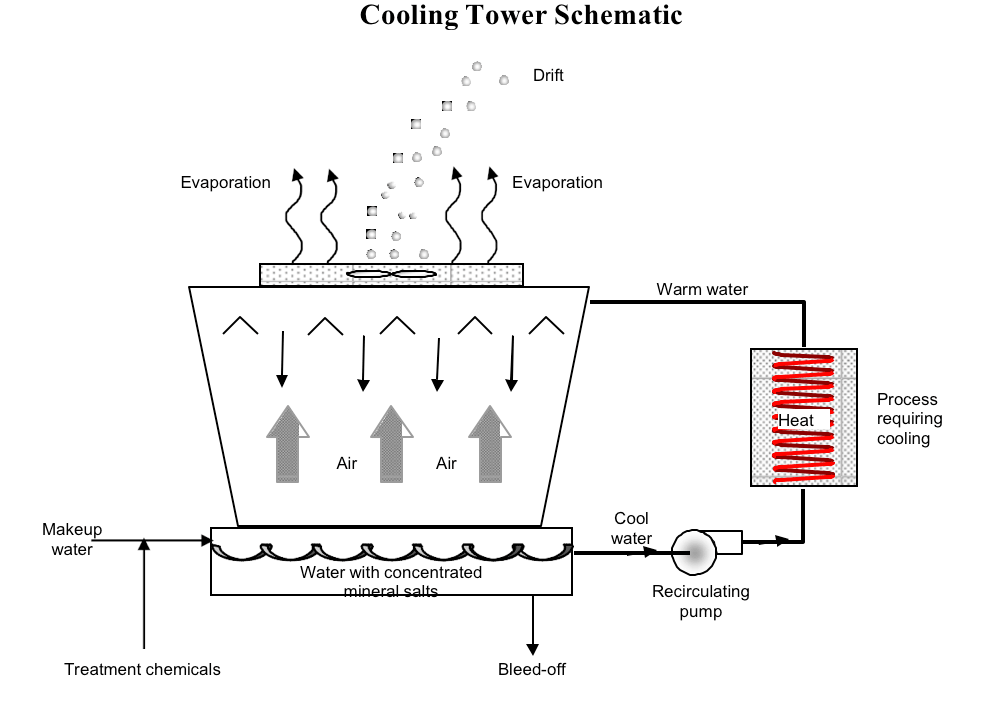 This video gives a look into the inside of a large cooling tower.

Towers may use river water, coastal water (seawater), or well water as their source of fresh cooling water. During operation, warm water from outside the system is pumped into the tower where it is carried in pipes or dispersed by sprayers or gravity. Water makes contact and is cooled by air being pushed or drawn via fans or convective forces. Before it is recycled, new water is added to the water based on the amounts lost during the cooling process.

Water can be lost in one of four ways in a cooling tower.

Evaporation (E) is the primary cooling function of the tower, in which water is converted from liquid to gas and leaves the tower as steam. It is the method that transfers heat from the cooling fluid to the environment. The quantity of evaporation is not a subject for water efficiency efforts.

Drift (D) is the small quantity of water carried from the tower as mist or small droplets. It is controlled with baffles and drift eliminators, and can be approximated in most systems as 0.02% of total system flow.

Basin leaks or overflows (L)are the result of improperly operated towers. To avoid problems, check float control equipment to ensure the basin level is being maintained properly and check system valves to make sure there are no unaccounted losses.

Leakage, blowdown, and drift together account for the total amount of water waste (W).

The amount of makeup water (M) to be added in a cooling tower is determined up by a simple water mass balance of waste water and evaporated water.

Optimizing water efficiency requires maximizing this ratio, which will minimize blowdown water removal and reduce make-up water demand. However, this can only be done within the constraints of make-up water and cooling tower water chemistry. Dissolved solids increase as cycles of concentration increase, which can cause scale and corrosion problems unless carefully controlled.

Heat transfer in industrial cooling towers is a function of the amount of contact between the air and circulated water.

This operating efficiency can be reduced by three types of degradation:

Tower design is the basis for selecting an appropriate cooling tower for a certain application. Design can vary based on draft, flow, and loop type.

Cooling towers can be characterized by the way in which air is moved.

Mechanical draft towers use mechanical fans to move air through the system. These towers implement either a forced or induced draft mechanism.

Forced mechanical draft towers utilize fans at the air inlet face at the bottom of the tower to push cooling air up through the stack. This allows for fans to work effectively in systems of high-static pressure. This also facilitates easy access for routine maintenance and service. Additionally, the location of these components in the dry entering air stream extends component life by isolating them from the saturated discharge air.

Induced mechanical draft towers utilize fans mounted in the top deck unit of the tower and cooling air is pulled up through stack. This results in low entering and high exiting air velocities, reducing the possibility of recirculation in which discharged air flows back into the air intake. It also minimizes the impact of fan noise on nearby neighbors and provides maximum protection from fan icing with units operating in sub-freezing conditions. These systems require the use of corrosion resistant fan materials to ensure long life and minimize maintenance requirements.

Natural draft cooling towers use natural convective airflow moving up the stack to cool water. These systems are very large (+400 feet high) and can exceed flows of 500,000 gpm (gallons per minute). Due to their size, they are used mostly by power utility companies. Hyperboloid designs are the standard among natural draft towers due to their high structural strength, lower material requirements, and improved cooling efficiency. 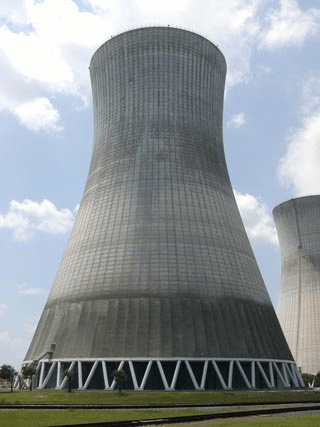 Cooling towers can also be distinguished by the way in which air and water flow relative to each other.

Cross-flow design mixes air and water at a 90-degree angle. The water flows vertically down the fill by gravity as air flows horizontally across. Cross-flow systems tend to have lower energy and operating costs than counter-flow systems. Specific advantages include:

Counter-flow design mixes air and water in a vertical flow method where the water is falling and the air is rising. The water flows vertically down the fill after ejection from a pressurized spray as air flows vertically up. Counter-flow systems tend to have a lower footprint than cross-flow systems due to more efficient air and water usage. Specific advantages include:

In addition to the draft and flow design, cooling towers can also be either closed or open loop.

Open loop systems are enclosed structures which distribute warm water over a “fill” with packing material. The fill provides a vastly expanded air-water interface for heating of the air and evaporation to take place. The water is cooled by direct contact with air that passes over it. The cooled water is collected in a cold water basin below the fill from which it is pumped back through the system. The heated and moisture laden air leaving the fill is discharged to the atmosphere at a point remote enough from the air inlets to prevent its being drawn back into the tower.

Closed loop systems work similarly to refrigeration systems. The cooling fluid (usually water or a glycol mixture) is contained inside a closed piping system and evaporative cooling occurs by running water over the pipe containing the heated water. Air is drawn through the recirculating water cascading over the outside of the hot tubes, providing evaporative cooling similar to an open cooling tower. Operation of the indirect cooling towers is therefore very similar to the open cooling tower with one exception: the process fluid being cooled is contained in a "closed" circuit and is not directly exposed to the atmosphere or the recirculated external water.

Cooling capacity is the heat energy dissipated from the cooling fluid in a given time. It is measured in cooling tower tons which is 15,000 Btu/h or 125% of a refrigeration ton (12,000 Btu/h). The required cooling capacity, apart from design types listed above, will influence the pump head, motor power, flow rate, and sizing requirements for a cooling tower.

Flow rate is the volume of cooling water that is moved through the tower in a given time, measured in gallons per minute (gpm) or meters cubed per hour (m3/h). This parameter is dependent on the cooling capacity, size, and available pumping power of the cooling tower system.

Pump head pressure defines how much pumping power is required to overcome the flow resistance in the cooling system. Larger systems with more resistance (counter-flow) will have large head pressure ratings.

Motor power is the required rating of the motor used to drive the fan in the cooling tower. The US typically rates this parameter in horsepower (hp) while other countries may use watts (W).

Sizing incorporates the height of a cooling tower along with its sump capacity and operating weight, all which vary based on a given tower’s required cooling capacity and flow rate.

There are a number of materials that can be used to construct each component of a cooling tower, depending on the design and application.

Metals used in towers include copper for heat transfer and piping, aluminum for fan blades, and galvanized steel or coated carbon steel for structural components. Certain dissolved components in water have a tendency to cause metals to corrode, and extra corrosion resistance requires the use of stainless steel or nonmetal materials to extend the life of the component.

Fiberglass reinforced polyester (FRP) is a hard, lightweight material that is corrosion resistant and can withstand heavy loads. It can be used for the construction of major body parts of the tower and smaller system components. This material is used in systems where chemicals in the cooling water would be highly corrosive to metals.

Polymers such as polyvinyl chloride (PVC), polyethylene, and polypropylene are favored as non-structural components in towers where the water’s corrosion potential inhibits the use of metals.

Wood is a common building material used in the construction of expansive cooling towers. It is most cost effective in designs requiring a lot of material, where the field labor for construction becomes less of a factor. Wood suffers from leaching (loss of wood preservative chemicals by flowing water), which can lead to degradation of the material over time.

Concrete is used as the primary material in natural flow cooling towers, though it is used as a component of some smaller systems as well.