V-belt pulleys (also called vee belt sheaves) are devices which transmit power between axles by the use of a v-belt, a mechanical linkage with a trapezoidal cross-section. Together these devices offer a high-speed power transmission solution that is resistant to slipping and misalignment.

V-belt pulleys are solely used for transmitting power between two parallel axels. The most notable difference between a v-belt pulley and other types of pulleys (round belt, flat, etc.) would be the geometry of the groove or grooves located around the circumference of the pulley; these grooves guide and gain traction on a v-belt. The accompanying video offers a comprehensive overview of some v-belt basics, as well as their advantages and variations.

A v-belt is a unique mechanical linkage with a cross-section that resembles an isosceles trapezoid. The v-belt and its complementing pulley create the most efficient belt drive known (sometimes achieving 98% transmission efficiency). V-belts were developed in the early days of automobile innovation to improve belt reliability and torque transmission from the crankshaft to rotating assemblies. V-belts remain a common type of serpentine belt today.

V-belt transmissions are a notable upgrade from round or flat belt transmissions; v-belts provide excellent traction, speed, and load capabilities, while enjoying an extended service life with simple replacement. Heavy loads actually increase transmission efficiency since they wedge the belt further into the pulley's groove, thereby improving friction. Typically, v-belt drives operate between 1,500 to 6,000 ft/min, with 4,500 ft/min the ideal capacity for standard belts. Some narrow v-belts can operate at speeds of up to 10,000 ft/min, but these pulleys must be dynamically stabilized. V-belt pulleys may be placed in a side-by-side configuration or a single pulley may feature multiple grooves around the circumference in order to accommodate a multiple-belt drive. This type of drive distributes torque across several belts and provides a mechanical redundancy. 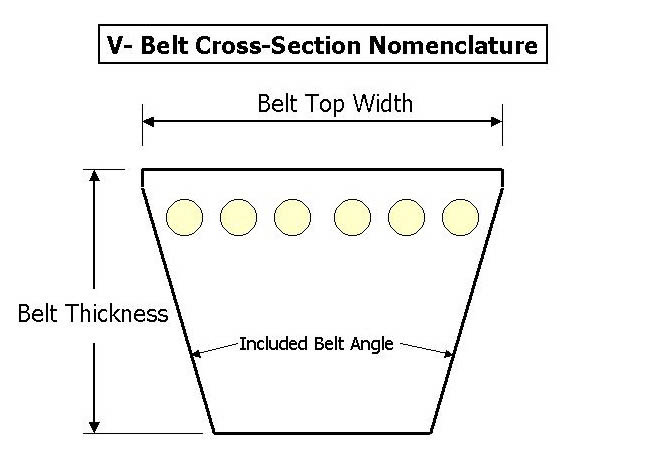 Several types of pulleys are used in v-belt transmissions, each with different implementation. Occasionally flat-belt pulleys are suitable when the backside of the v-belt is used to rotate the pulley in the opposite direction of the driven pulley, as commonly employed with ribbed v-belts.

Common materials of construction include: aluminum, brass, cast iron, plastic, stainless steel, steel, and zinc alloy. For v-belts which exceed 6,500 RPM, pulleys must be manufactured within closer tolerances to ensure stability. The following chart should be referenced. 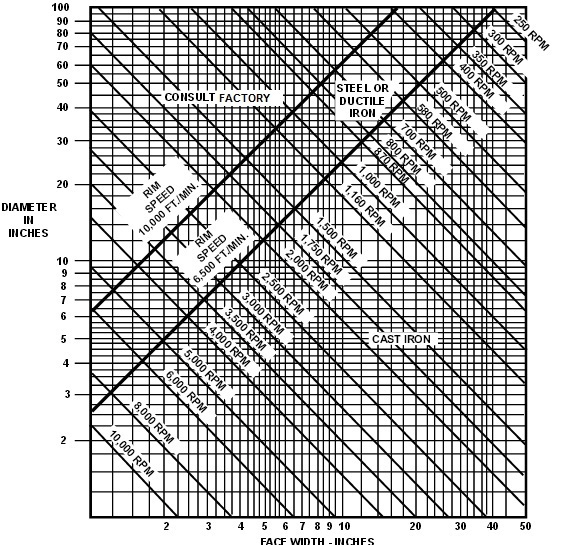 Pulleys are manufactured with grooves that are designed for a specific style and width of v-belt. A more comprehensive look at v-belts is offered in the v-belt and v-ribbed belts selection guide. Conventional and narrow v-belts are frequently cogged to improve the belt's flexibility and heat dissipation, but pulleys do not require any design alterations to interact with cogged v-belts. Cogged belts are typically represented by an 'X' in the belt denomination. Pulleys for conventional and narrow v-belts are frequently interchangeable provided the pitch widths and angles are equivalent.

Primarily, the bore diameter of the pulley must be a geometric match with the mating shaft. The shaft about which the pulley rotates is an axle, and the most common method of accommodating this axle is by the use of a simple bore, whereas the pulley is allowed to freely rotate about the axis with no torque transmitted. This bore is used in idler pulley applications, but is otherwise useless for power transmission. Other mounting styles include:

The following parameters are important when selecting v-belt pulleys.

Belt profile, or the style and sizes of the belt being integrated.

Outside diameter, or the distance across the pulley when measured between groove edges.

Center diameter is the distance or distances between the shafts of the pulleys in the transmission. V-belt transmissions are limited by center distances, which must be no more than three-times the diameter of the largest pulley, lest significant slipping can occur.

Grooves, the grooves located on the pulley, including the number, and angle and width of the flanges.

Pitch diameter, or the diameter of the pulley where the belt is engaged, and is critical to the drives strength-to-weight ratio.

Arc of contact, the degree of which the belt wraps around the pulley.

The standards below are common industrial standards related to v-belt pulleys and their implementation into a v-drive.