Cylindrical lenses are so named because of the presence of a curved optical surface, which may be considered as part of a cylindrical cross-section. They have a variety of uses and applications, including:

The image below shows the use of a cylindrical lens, and the effect of varying its relative position, in a beam-shaping application. 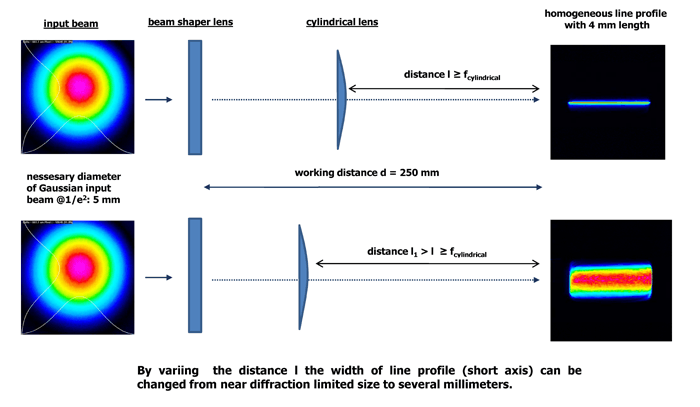 As a type of optical lens, cylindrical lenses share many attributes and specifications with other lenses. For information about a cylindrical lens's important optical points and conjugate ratios, please see Engineering360's Optical Lenses Specification Guide.

The table below describes four common cylindrical lens shapes and their attributes. Positive (or converging) lenses focus light to a point behind the lens, while negative (diverging) ones scatter light.

Cylindrical lenses can be designed to operate within specific ranges of the electromagnetic spectrum; these ranges are largely determined by a lens's material of construction. These ranges are not mutually exclusive, and lenses may be built for use within two adjacent ranges. For example, a lens may be designed to operate in both the infrared and visible ranges, or visible and ultraviolet ranges, etc. Manufacturers may specify lenses as:

The electromagnetic spectrum, showing the relative positions of the ultraviolet, visible, and infrared spectrums.

A cylindrical lens's surface quality rating is based on the MIL-0-131830A(1963) standard. The standard specifies two different types of surface defects:

Scratch-dig ratings consist of two numbers separated by a hyphen, as in x-y. The x in this formula refers to the maximum allowable width of a scratch — expressed in tenths of a micron — while the y refers to the maximum width of a dig, expressed in hundredths of a millimeter. For example, a cylindrical lens with a 20-10 scratch/dig rating specifies that any scratches have a maximum width of .002 millimeters (2 microns), while digs must not exceed .10 mm in width. For both scratch and dig specifications, smaller numbers are desirable.

Optics manufacturers often specify optical surface flatness using a "peak to valley" (P-V) measurement. This value is the difference between the relative highest and lowest points of the optical surface. P-V is expressed as a ratio of a set wavelength, as shown in the table below. When expressed as a fraction, a higher denominator indicates better quality.