An optical lens is a transparent optical component used to converge or diverge light emitted from a peripheral object. The transmitted light rays then form a real or virtual image of the object.

Lenses are a good example of transmissive optical components, meaning that they pass or transmit light. Other transmissive components include filters, windows, flats, prisms, beamsplitters, and waveplates, while the opposite category — reflectives (which reflect light rather than transmit it) — include optical mirrors and retroreflectors.

Optical lenses have been used since at least c. 700 BCE for a variety of applications, including:

Lenses can be classified into two broad types: positive (or converging) and negative (or diverging) lenses.

Positive lenses cause a collimated beam of light — assuming the beam travels parallel to the lens axis and passes through the lens — to converge or focus on a spot behind the lens. When referring to the image above, biconvex and plano-convex lenses are considered positive. 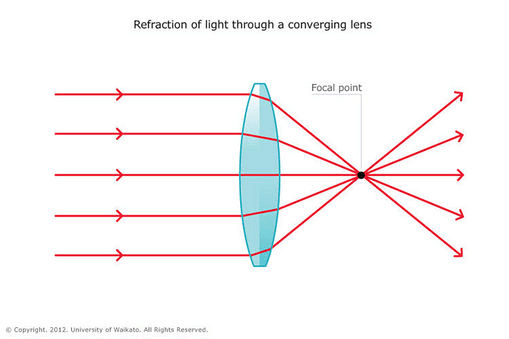 Negative lenses cause a collimated light beam to diverge and spread behind the lens. The two types of concave lenses — biconcave and plano-concave — are negative. 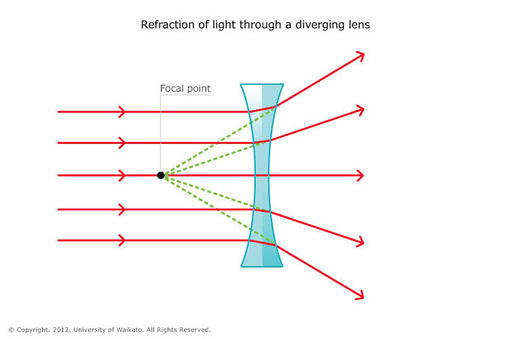 Selecting the correct lens type and polarity is heavily dependent upon the intended application, as described below. Choosing an ideal lens shape -- known as the application's "best form" -- is key to minimizing optical distortion and aberration.

A lens's focal point is the point on the optical axis where light converges. Its focal length is the distance from the lens to this point, as indicated in the image. A positive lens has a positive focal length, while a negative lens has a focal length less than zero. The image below illustrates these two parameters.

The conjugate ratio is defined as the ratio between the distance from the object (light source) to the lens and the distance from the lens to the projected image. The endpoints of these two lengths are known as the object and image points. These two points lie on the lens's optical axis and are positioned so that light emitted from the object point will be focused at the image point. An object placed at the focal point of a lens results in an infinite conjugate ratio, while an object placed at twice the focal length results in an image formed at twice the focal length, giving a conjugate ratio of 1.

The images below illustrate the important optical points. 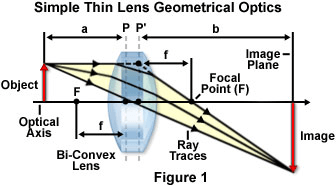 Engineering360 classifies lenses into the following types. The categories are not mutually exclusive; for example, a spherical lens may also be achromatic.

Spherical lenses (or singlets) have curved surfaces which converge or diverge rays. All of the lens cross-sections are spherical lenses.

Unlike spherical lenses, cylindrical types have curved faces which can be considered part of a cylinder shape. This causes them to focus transmitted light to a line instead of a single point. Cylindrical lenses are commonly used to change an image's aspect ratio or shape a laser beam.

Achromats (also known as achromatic lenses) are used to minimize a special type of image distortion called chromatic aberration. This distortion occurs when a lens fails to focus all color wavelengths to the same convergence point, resulting in blurred contrast and color fringing. Achromats use at least two separate lens elements —one high-dispersion concave and one low-dispersion convex — to achieve their corrective effect. 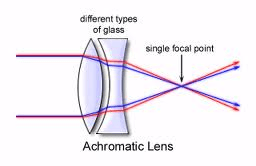 Fresnel lenses consist of thin, lightweight plastic sheets marked with a series of concentric grooves. Each groove serves as an individual refracting surface; the series of grooves bends collimated light to a common focal point. Fresnel lenses are a compromise between efficiency and optical quality: because the lens material is very thin, a very small amount of light is lost in the transmission process.

A comparison between a standard biconvex lens and a Fresnel lens.

Gradient index (GRIN) lenses are simple planar lenses which continuously bend light rays within the lens until they finally converge on the focal point. This contrasts with conventional lenses, which primarily bend light abruptly when it exits the back of the lens material. GRIN lenses are therefore cost-effective and simple to employ. Additionally, the ability to precisely manufacture the length of the plane results in an enormous flexibility to fit application parameters.

A GRIN lens in operation. Note the gradual bending occurring within the lens plane.

Important specifications for optical lenses include wavelength and material.

After selecting the best lens type to fit their application, buyers should analyze the wavelength range of the application. When specifying a lens, manufacturers typically provide a range of electromagnetic radiation that the lens is designed to transmit. The wavelengths can be grouped into three broad groups: infrared, visible, and ultraviolet. A lens might not be limited to a single spectrum, and may be able to transmit wavelengths from both the infrared and visible range, or visible and ultraviolet range, etc.

Historically, optical lenses were constructed from transparent glass, but are now made from other materials — acrylics, polymers, and minerals — as well. Lens material is determined by the raw material's dispersion and wavelength characteristics. For example, a lens designed for applications demanding low dispersion might be made of crown glass. Acrylic and polymer lenses are best suited to transmission within the visible spectrum, while minerals such as germanium and sapphire are suitable for a very wide range of wavelengths but particularly excel within the infrared spectrum.