Turbine flow meters measure the rate of flow in a pipe or process line via a rotor that spins as the media passes through its blades. The rotational speed is a direct function of flow rate and can be sensed by a magnetic pick-up, photoelectric cell, or tachometer.

The sensor used to provide a signal can either be a magnet pick up, photoelectric cell or tachometer.

A photoelectric cell also senses the motion of the turbine blades. Instead of indirectly measuring an implied current, the sensor produces electrical pulses as the blades pass the sensor. The pulses are counted or totalized over a time period to sense the rotational velocity of the turbine.

A tachometer, like the photoelectric cell, also directly senses the presence of the turbine blades. A tachometer is most often an electromechanical device that produces electrical pulses as the blades pass the sensors and ultimately sense the rotational velocity of the turbine.

Turbine flow meters are ideally suited to handle clean media (gases or liquids) with a low kinematic viscosity. In the ideal application the only force acting on the turbine is the laminar flow of media through the meter. Mixed phase media, viscous drag, and turbulent flow patterns can all interfere with the dynamic behavior of the turbine, which is essential in providing accurate flow measurements.

Viscous drag is a retardant force that acts on the boundary layer between fluids and solid surfaces. Viscous fluids, fluids that resist flow, are fluids that have a higher level of internal friction and subsequently exert a significant sheer stress tangent to the direction of flow. This stress causes an increased amount of friction to exist between the fluid and solid surfaces, such as a pipe wall. 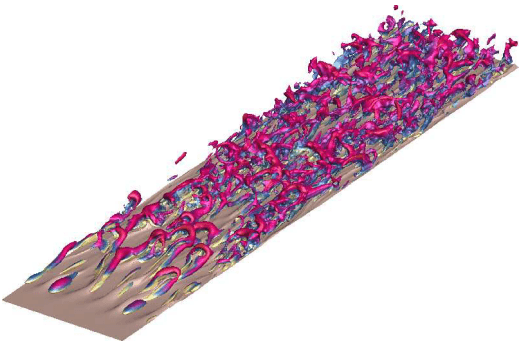 Reynolds number is a dimensionless value used to describe the flow characteristics of a fluid and the tendency to experience a considerable amount of viscous drag. The importance of the Reynolds number is that it determines what flow regimes will exists for fluids of known density and absolute viscosity traveling at a given velocity. A higher value is correlated with turbulent flow regimes while a lower number is correlated with laminar flow regimes. It is defined by the following equation:

Laminar and turbulent flow patterns are two flow regimes that describe the flow of media through space.

Laminar flow patterns move through a pipe analogous to a coherent beam of light. There is no interference between fluid layers as they easily flow past one another. They possess a vector gradient where the fluid stream furthest from any retardant forces or solid surfaces moves fastest. In observation there is a parabolic shape to the flow pattern

Turbulent flow causes a retardant force to be exerted on the turbine blades, working against the fluid momentum which provides a driving torque on the turbine. In turbulent flow patterns, fluid slips past the turbine and the rate at which it rotates is no longer proportional to the flow rate. Since viscous drag and turbulent flow is conditional to the absolute viscosity, fluid density, and fluid velocity, turbine flow meters must be properly calibrated to handle a specific media.

*Turbine flow meters, when properly calibrated and installed, are capable of providing some of the highest accuracies of all flow meters.