Honeycombs and honeycomb materials are used to fabricate sandwich panels with a honeycomb core possessing tremendous compression strength. Utilizing materials such as paper, thermoplastics, or cloth for core material allows for the production of lightweight honeycomb structures with substantial structural strength regardless of building component strength.

Honeycomb structures design is comparable to the natural beehive. The geometry of such structures varies significantly, however they all possess a layer of hollow cells between thin vertical walls. The cells are mainly hexagonal in shape or arranged in columns. Honeycombs are widely used in applications involving flat or slightly curved surfaces due to a high specific strength. Their strength serves as a primary reason for their widespread installation in the aerospace industry as well as other sectors including packaging, furniture, automotive, and sporting goods.

Use of the honeycomb in man-made structures has a long history dating back to classical antiquity. Euclid and Zenodorus were among the first Greek mathematicians to learn that hexagonal shapes make the most efficient and robust use of space and materials. The Pantheon dome in Rome is an early example, using honeycomb structures in its interior structural ribbing. In 1638, Galileo initiated a discussion about the strength of hollow solids. In 1859, Charles Darwin noted that honeycomb structures are ideal for economizing labor and wax. Three fundamental techniques utilized for the production of honeycomb structures, including expansion, corrugation, and molding, were developed in 1901. Hugo Junkers patented the application of the first honeycomb core in aircrafts in 1915. Norman de Bruyne, of Aero Research Limited, achieved initial success in structural adhesive bonding of honeycomb sandwich structures in 1938.

Honeycomb cores are fabricated from a wide variety of materials. These range from paper and cardboard, used to provide low strength and stiffness for low load applications, to higher strength and stiffness for enhanced performance applications, as in aircraft structures. Honeycombs are processed into flat or curved composite structures. They form complex compound curved shapes without excessive mechanical force or heating.

Thermoplastic honeycomb cores are produced by an extrusion process and sliced to thickness. Other types of honeycombs made from paper or aluminum follow a multi-stage production process. These processes involve printing large thin sheets of the material and stacking them in a heated press to facilitate adhesive bonding. These slices are stretched and expanded into sheets of continuous hexagonal cell shapes. Properties of the honeycomb materials depend on the size of the cells as well as thickness and strength of the material used.

The main types of honeycombs include:

These honeycombs possess the highest strength/weight ratio, unmatched by any other structural materials. They have a mixture of geometric cell shapes and properties controlled by foil thickness and cell size. The resulting honeycomb comes in an unexpanded block form and is stretched to form a sheet.

Aluminum honeycombs are at risk of corroding if applied in some applications, such as marine structures. This type of honeycomb deforms irreversibly upon impact with a cored laminate.

Nomex honeycombs are manufactured from Nomex paper—a type of paper based on Kevlar fibers. These honeycomb cores combine high strength with fire-resistant properties and are used in aircraft interior panels as well as in other high-performance components. They are preferred due to their low density, solid stability, and mechanical strength though they are more expensive than other materials.

Thermoplastic honeycomb cores are lightweight and easily recyclable. The main drawback is the difficulty in creating a strong bond between a honeycomb and skin. They come in several types:

These cores are ideal for hostile environments and are used in train doors and floors, bulkheads, and other areas.

Honeycombs are applied in a broad range of industries, such as aerospace, sporting goods, automotive, and construction sectors. Applications include:

When selecting honeycombs and honeycomb materials, consider specific performance requirements. Given their varying properties and qualities, check the manufacturer's specifications for further details regarding product capabilities. 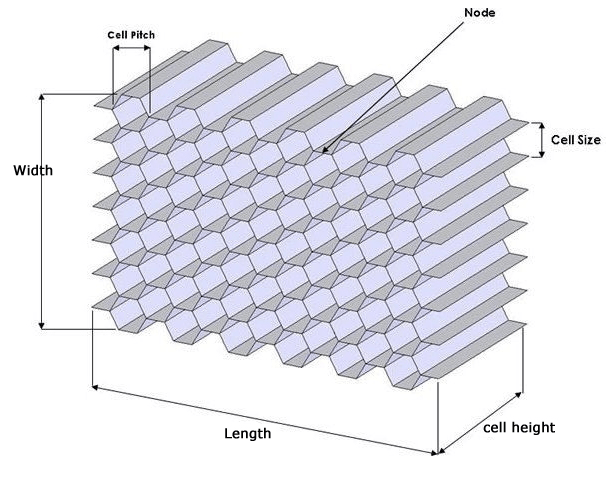